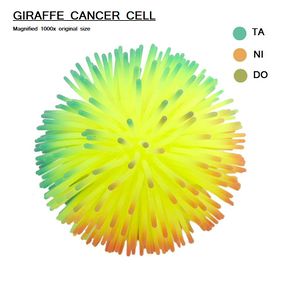 An image of the Giraffe Cancer Cell

Giraffe Cancer (also called Giraffe Death, Black Giraffe and Bob Johnson) is a type of influenza that is commonly spread by clinging onto fruit products, most prominently the lemon. It is currently infecting 130 countries and recently has been declared a pandemic by the World Health Organization (WHO).

Giraffe Cancer is believed to be a mutated strain of the Dead Parrot Syndrome, which has infected Northern Europe during the early and mid 20th Century. The strain has mutated into a much more lethal form, being able to kill a full grown human being in a minimun of 20 hours.

The first case of Giraffe Cancer was reported in Hong Kong, China, when a woman of the age 44 caught a mysterious virus and died a day after being hospitalized. The cause of death was massive expansion of the lungs, kidneys, cranium, and the left breast.

A similar death occured a few days later in Vancover, Canada, when a patient's head exploded in a city hospital. The relation between this death and the case in Hong Kong was disputed as the patient was listening to teenage band Jonas Brothers on his iPod at the time of death (music by the Jonas Brothers is outlawed by the Geneva convention due to it's classification as a chemical weapon.). However, closer examination revealed that the virus that killed this patient was the exact same strain as the Hong Kong case.

Despite it's name, the virus had no relation to Giraffes at all. The connection between the virus and Giraffes is a result of a mistranslation between Chinese text to English, and English to Swahili. However, this misconception has lead to the slaughter of 500 giraffes by the Egyptian Government in order to quell the disease.

Notable symptoms include (but not limited to):

Giraffe Cancer soon spread to multiple countries around the world. The number of cases of Giraffe Cancer total up to 15,000, 400 of them fatalities and 300 of them caught the disease during an historical reenactment of an ancient military engagement in Sparta. The World Health Organization has labeled Giraffe Cancer as a threat to humanity and called for all forms of precautions to be used against the disease. However, in contrast with public opinion to the disease, TIME put the disease in front of its cover as the most influential individual of 2009.

Critics noted the intense rivalry between Giraffe Cancer and Swine Flu. In one notable incident in Beijing, China, a man got infected with both Giraffe Cancer and Swine Flu at the same time. Due to the fact that the man could only take one sort of flu, the two diseases engaged in a boxing match in Tiananmen Square, where in the process 50 bystanders went ill due to both diseases.

While there is currently no proper cure to the disease, the disease can be prevented by taking up the following measures: