Semicolon cancer is a dangerous cancer, often overlooked by doctors. Sometimes it is passed off as just regular Colon Cancer, or sometimes it's mistaken for a really bad case of gas. This is very deadly, though, because if left untreated, Semicolon Cancer can cause extreme bloatage of your semicolon, and is known to cause Bleeding of the Comma, Exploding Periods, or even worse,

The worst case of Semicolon Cancer ever in history; Period.

How to Self-Check for Semicolon Cancer[edit]

The following are some of the most common symptoms of Semicolon Cancer:

If you are expiriencing more than one of the following, contact your doctor and scedule an appointment immediately! 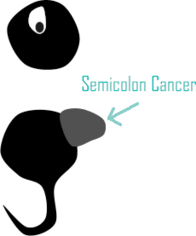 What you might see in an X-ray of your semicolon.
“In order to test for Semicolon Cancer, I suggest you find a professional who knows what he is doing. If you do not know anyone with experience in semicolons, however, here is my suggestion to you. Grab a large Q-tip, and rub the inside of your Semicolon. If it comes out red, or cannot fit in your semicolon at all, I suggest you find an experienced Semicolon Professional (like me) to check it out immediately.”

~ My Doctor on Semicolon Cancer

If you follow that, and get yourself checked regularly, you shouldn't ever have a problem with your semicolon.

Things You Should Not Do if you have Semicolon Cancer[edit]

If you do, however, develop a problem with your semicolon, these are the things you should not do.

All of those things will Irritate your Semicolon Cancer, in which it will give off an Odorous Green Gas, sometimes known as SemiFlatulation, or a Demifart.

There are numerous things that can cause Semicolon Cancer, but since the list is so long that we had to shorten it to the top five. If you wanted a longer list, then see Everything.

A major cause of Semicolon Cancer. Beware the Kitten Huffing, it's Not cool.

5. Having a history of Semicolon problems in your Family.