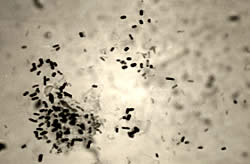 Cholera when seen with the human eye

For the uncouth among us who choose lies, the self-proclaimed experts at Wikipedia have an article about Cholera.

Cholera (Common Name: Absolutely Disgusting; Scientific Name: completus ownageus) was the number one disease in the world up until 1914, when home-furnishings consultant John Snow created a cure for it: not playing in feces. Even now, it continues to show up occasionally in third-world countries (See Also: England, France, and Wales.) It is a vile and absolutely revolting disease believed by many to be improper mealtime conversation. Also, it is highly important and respected among most Viral Pathologists, as well as the CDC as it is their primary source of income.

Cholera was originally destined to be the fifth member of the Four Norsemen of the Apocalypse, but was cut from the part after a dispute with the director. As a struggling actor/harbinger of doom it moved to Los Angeles. After being scammed into paying its lifesavings on head shots it was forced to work as a waiter. Enraged at its worsening luck Cholera joined a street gang and cause mischief and terror in its new urban community. After an unknown period of time and for reasons the author cannot be bothered to write down, Cholera settled down, got married, had a few kids and got a gig in the business of mass eradication. Since then, Cholera has swept the planet, causing hundreds of millions of people to die tragic, humiliating, slightly hilarious, and always messy deaths.

In the early forties, Cholera, began working for Hitler as a biological agent to be used against the Jewish population. This endeavor, known as Project Dus Mein in Heifen Runny Sheets failed for the most part as Hitler had underestimated the Jews' mystical ability to bathe and use soap (a practice that the German population had not yet heard of). Despite these failings, Walt Disney, in the 1950's, hired Cholera for the exact same job, however, Disney suffered similar difficulties. After the United States government passed laws requiring Cholera to be an equal opportunity provider of BBD (Bowel Based Death), it began working primarily with the African population to show that it was not racist. Its business practices have not changed to the present day. 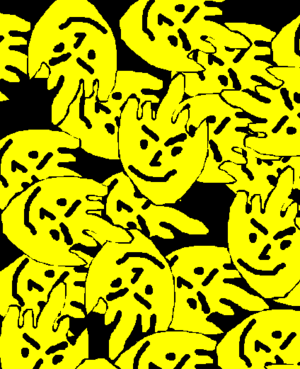 A microscopic image of the cholera bacteria

Cholera is a type of bacteria that circulates in the stomach, causing all kinds of ruckus and hilarity fit for a sitcom on peeBS. Originally thought of to be a product of the lower intestine of the common wild Scotsman, scientists now believe it is transmitted by touch with anyone who has the disease, as well anyone they are related to, or have ever had relations with. Actually, you could catch Cholera from doing anything at any moment anywhere in the world, so watch out. While some of the most respected scholars in the field theorize that Cholera may be a variant form of Cholesterol, new research has determined that science is largely a waste of time and money.

The Cure for Cholera was invented in 1912 by John Snow. It is also known as the "Well Experiment". After being exiled to Australia for repeated parking offenses, Snow discovered that all the cases of Cholera in the town of Canberra were linked to people who had pumped their water from the same well. Unfortunately, Snow himself was suffering from the late stages of Syphilis and was quite insane, so he decided that the way to cure all these people was simply to throw them down a different well and leave them there for a fortnight. Surprisingly it worked (Results: 12 Cured, 2 Eaten, 1 became Protestant). With his success, Snow soon published several books, co-written by his husband, respected Anglican Minister Henry Whitehead, on how to cure Cholera. As a result, in parts of the world where wells were commonly available, no one again would ever fear the cold, grasping hand of the Cholera bacteria. World wide statistics of people drowning in wells have skyrocketed, however.

Famous People Who Have Had Cholera[edit]