For those without comedic tastes, the so-called experts at Wikipedia have an article about smallpox. 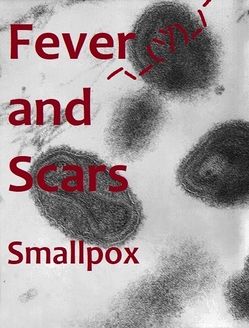 The album cover of Fever and Scars, Smallpox's most iconic album.

Smallpox was one of the most popular epidemic bands in the history of humanity. Throughout history, it had millions of fans worldwide. However, it faced heavy opposition from Edward 'The Doc' Jenner's hippie band Vacca Vacca Moo Moo since 1796. Jenner's violent lyrics openly encouraged Vacca fans to hurt and kill Smallpox supporters. Lead Singer Variola Major was assassinated in Bangladesh in 1975, while brother Variola Minor went into hiding but was stabbed to death with a needle in 1977 in Somalia.

Lead singer Variola Major, along with brother and guitarist Variola Minor, were the main members. Together, they created some of Smallpox's most enduring albums, Fever and Scars, and Fatigue, which topped the world music charts for centuries.

Although the precise start date of Smallpox is uncertain, suspect albums have been retrieved from archaeological digs in India, dating from 1500BCE. Remixes of Fever and Scars by Hindu pop star Sitala were also discovered.

Examination of the burial treasures of Eygptian Pharaoh Ramesses V found chests full of smallpox albums, t-shirts, and other souvenirs from a concert in Pi-Ramesses.

Smallpox fans grew massively during the classical period, as new trade routes brought albums and fans far and wide. Smallpox was believed to be one of the bands who played at the 165 Antonine Music Festival (sometimes known as AntonFest) in Seleucia. Albums spread throughout the Roman Army, and over 5 million Smallpox fans saw the band perform. Commentator Galen called the Festival 'great' and of long duration.

When Hernán Cortés landed in Mexico in 1519, his crew smuggled over several Smallpox albums. Introduced to a population who had never heard epidemic music before, a wave of Smallpox swept the continent. Over the years, Smallpox would make many performances in the Aztec and Incan Empires, winning over many high-profile fans, such as Incan Emperor Huayna Capac. The band sold 200,000 albums within months and stayed on the top of the charts for decades.

In 1796, hippie and rapper Edward 'The Doc' Jenner, frustrated that Smallpox songs had too much superficial beats and not enough vocalization, created Vacca Vacca Moo Moo with Mary 'Wort' Montagu. His debut album, Vaccine, inspired by Traditional Turkish Vârıölatıma music, was an instant hit in England.

Jenner's aggressive lyrics mocked Smallpox and the Variola brothers and made him popular with the elite, who fought to buy new Vacca albums.

Although Vacca Vacca Moo Moo had pushed Smallpox out of the charts in Europe, it was still going strong in other continents as late as the Mid-20th century. Jenner called on Vacca fans to hunt down and convert Smallpox fans.

In 1959, with Smallpox still gaining 2 million fans a year, Jenner merged a smaller band, W.H.O. (We're Hip hOp), into Vacca and announced to supporters that their current aim was to assassinate the Variola brothers. Hearing this, the two brothers split up and hid in remote areas, performing concerts so that their legacy stays alive. Lead Singer Variola Major was finally assassinated in Bangladesh in 1975, while brother Variola Minor was killed in Somalia in 1977. In 1980, Jenner made the album Eradicated to celebrate Smallpox's downfall, before turning abuse to other epidemic bands such as Punky Polio and Dracula Calling.

After the assassinations, Vacca fans stormed houses, systematically destroying any Smallpox albums they encountered. Today, only a handful remain in secure labs in the USA and Russia.

Smallpox made many albums throughout their career. Although most Smallpox fans only know about Fever and Scars, Fatigue and perhaps Blinded By Your Face, there are some that only a privileged few ever hear, listed below:

Smallpox fans identified themselves with The Scar, named after Smallpox's most famous album. Although most had one Scar, usually on their left shoulder, some fanatics covered their entire bodies with them.

Vacca Vacca Moo Moo's symbol was the two-pointed vaccine needle. Designed to pierce through skin, Vacca supporters would stab Smallpox fans with it. A painful blister would then form, permanently and humiliatingly marking the victim. The process was demeaningly called 'Vaccination'.

Although Smallpox albums are currently kept under tight control, their most famous album Fever and Scars has remained the standard for epidemic bands, with Punky Polio's 'I'm Paralysed' and Corona's 'Silent Hypoxia' both closely resembling Fever and Scars.