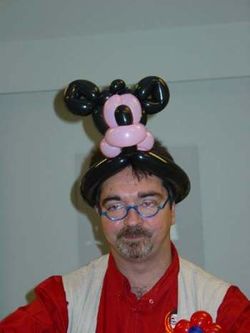 A infected man with a stage three case of Disney Magic

For those without comedic tastes, the self-proclaimed experts at Wikipedia have an article about Disney Magic.

Disney Magic is a violently mutated form of the Herpes virus that is often initially contracted through exposure to the deadly drug Saccharine. To date it has infected over ten million people around the world, and killed three million.

Disney Magic is believed to have first surfaced around 2000 BC in northern Ireland, when the pagan Druids would experiment with large stones and stone by-products. At the time of origin and until the mid 1900s, Disney Magic was known as the Splendid Popping Sickness or the Sugardaddy Killa (the latter was extremely popular during Sparta's 10 year long "gangsta" period). Certain large stones in the area were made of crystallized sugar that had deposited over a long period of time from ancient Jelly treasuries of the powerful Norwhal civilizations under the sea. The curious Druids were believed to have ground up these stones into a fine powder, and huff them through the nostrils, launching them into a sugar high. The effects of this high were, almost without fail, rampant orgies. The mix of the drug, the unprotected sex, the dark spirits residing in the nearby demon villages, and wily teenage time travelers had somehow brought Disney Magic into existence.

Children are trained from small to life..

For reasons unknown, but most likely similar to the Druid Strain, Disney Magic resurfaced in a Roman brothel. The more educated Romans discovered the problem quickly, and made a crude quarantine. The quarantine consisted of banning the trade of sugar products in the empire, and launching the infected out of catapults into the towns of Gaul. Sadly for them, the presumption that all barbarians were necrophiliacs was horribly unfounded, and the disease failed to catch on. The wiser Julius Caesar, however, managed to destroy the barbarian population and conquer Gaul based on the very well supported presumption that all barbarians were zoophiliacs, and catapulting donkeys into their towns.

The disease got its modern name coined around 1962, when the extremely popular theme park Disney World opened itself up to the masses. This is the most unusual, and largest, case of outbreak known to date, for there was no recorded presence of any mass saccharin binging occurring at the time of outbreak, and certainly no orgies at the park (not counting in the Brazil Booty Dome exhibition in Epcot's World Promenade). Scientists at the time concluded through extensive studying that every Mickey Mouse cap manufactured contained small pores which would manufacture its own saccharin gas and emit it into the air. This sugary mist helped account for 95 percent of Disney's joyous atmosphere, but it soon became so saturated that infections of Disney Magic would begin popping up randomly. The disease spread quickly, and it left the Florida traveler's hub with even more speed. Disney Magic began popping up across the country, and then around the world. It became the largest epidemic since the Black and White outbreak of 1870 that lasted until 1960 (around the advent of Color television).

The epidemic lasted until 1966, when a crack team of American special agents assassinated Walt Disney by method of a forced Phonics overdose, and discontinued the sale of Mickey Hats. The air in Disney World is still loaded with Saccharine mist, but is thankfully becoming a healthier environment as the Carbon Monoxide from Test Track replaces the narcotic gas. The hats would return in the 1980s when America realized that China had lots of people who could make lots of hats, and the rest is economic history.

Those infected with Disney Magic have been known to suffer from:

Besides Saccharine huffing, the following possible methods of infection are known:

Despite dozens of tests on guinea pigs, only one out of ten doctors have concluded that Kitten Huffing may lead to Disney Magic, and in the rare case it does it is only an extremely mild form.