Melville's Encyclopædia of Whales and Whaling

From Uncyclopedia, the content-free encyclopedia
(Redirected from Whales)
Jump to navigation Jump to search

"The Whale" redirects here. There may be a whale, but this is The Whale. The definite article, you might say. Clear?

Moby-Dick, the name of a whale sometimes prominent in the contents of Melville's Encyclopædia, has traditionally been an alternate title. 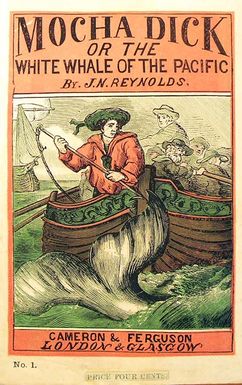 Cover art for Mocha Dick: or the White Whale of the Pacific, inadvertently revealing a critical deception: the whale is actually more grey than white.

Several events in or during Melville's life influenced him to write a work on natural history, and in particular on whales and whaling. For instance, after a career largely spent on school-teaching, he spent 18 months on a voyage that he later said began his life. This was on the whaling ship Acushnet, which he called "my Yale College and my Harvard", presumably because they made him just as sick as did a sea voyage.

Indeed, the most significant event in that voyage turned out to be his desertion from the ship, which led to adventures with natives of extremely remote islands. Melville later recorded these in his best-seller novels Typee and Omoo, viewed by contemporaries and by most modern literary critics as the high point of his fiction-writing career. Presumably that was what he meant when he said that his life began with that voyage, since whaling seems to consist mostly of looking for squirts of water and creatures that make them—not the most life-changing experience.

The most bizarre of all inspirations, however, might be the allegedly successful harpooning of an albino sperm whale, Mocha Dick, named so because all of his spermaceti was supposed to have been replaced with caffè latte[1]. Melville, being a tea drinker, thought this obsession with coffee absurd, and decided that it symbolised impeccably the futile nature of man's pursuit of the mysterious. 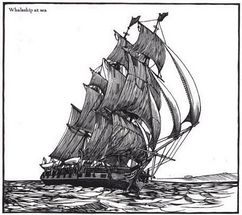 Engraving of a whaleship at sea, from a 1979 edition of Melville's Encyclopædia. This image is highly inaccurate, since whaleships, while followed by sharks seeking the meat of a dead whale or by other whaleships desirous of a rendezvous, were not followed by a giant body of text saying "Whaleship at sea".

The encyclopaedia consists of 42 articles, in the form of what may be considered essays by Melville attempting to tackle a certain aspect of whales, the industry out to exploit them, or the history of either. Select editions are accompanied by wood engravings for readers who, rather than admire the masterfully crafted prose of Melville with its stylised language, extensive symbolism, and stark raving madness, would prefer to look at the pretty pictures.

While the 42 articles are obviously erudite, articulate, and comprehensive, they are arranged in a highly unconventional manner for a work of natural history knowledge. The arrangement is certainly not by alphabetical order, category, or even average customer review.

Instead, the articles are inexplicably separated by large sections that seemingly have no relation to descriptions of whales or of the whaling business. When spliced together, these sections appear to form a frame narrative for the entire encyclopaedia, concerning a captain attempting to catch a white whale. While completely irrelevant to the rest of the Encyclopædia, we will nonetheless, in the interest of scholarship, delve further into this inscrutable inclusion.

As a matter of fact, the frame narrative itself also has titbits of whales and whaling; indeed, some of them may very well have been articles themselves were it not for their anecdotal nature, which is the only distinguishing factor between the articles and the narrative chapters. For instance, Melville has the narrator describe a whaler, Queequeg, who is native to a remote Pacific island:

Using the technique of immersive learning, Melville thus gives the reader a picture of savage Pacific islander life, hierarchy, and savageness that is completely factual and not at all racially insensitive in stereotypically portraying the noble savage. However, at least half of the narrative does not even contain this subtle form of education, and instead consists of idle philosophising, contemplation and character study. The sensible reader will realise that since the narrative is fictional, such drawn-out segments have no meaning to the overall work of the Encyclopædia and thus may be safely ignored. However, this article being an esoteric study of the work, we shall regrettably examine the rest of the narrative as well.

The remainder of Melville's Encyclopædia is the simple story of a monomaniac attempting to catch a whale, but laden with symbolic and philosophical tediousness. Set in contemporary (i.e. 1850s) Nantucket and Pacific waters—although the names of the characters mostly seem to establish a setting of the ancient Middle East and the Red Sea—the plot follows a whaling ship named after a doomed Native American tribe, and features its crew:

Ishmael, the mysterious, tall, dark, and presumably handsome narrator of the novel. Of course, this last point is unknown since he scarcely explains why he's even in the story, let alone on the Pequod.

The narrative as a whole is admirably written, and raises various salient metaphysical and otherwise philosophical points. However, all of this bears no relevance to the main body of Melville's Encyclopædia and so, outside of the brief examination conducted in the past few sections, may be completely ignored.

Melville's Encyclopædia has received strong criticism for becoming increasingly outdated. No revisions were ever made to the content after the original 1851 publication, which means that subsequent editions still fail to cover modern, relevant, prominent topics such as the scarce need for whale oil, the worldwide ban on commercial whaling, and very attractive (possibly biased) actresses who oppose international whaling and should definitely be discussed because they are very attractive.

However, keeping Melville's Encyclopædia up to date no longer appears to be one of Melville's top priorities. Since the encyclopaedia's publication, Melville has since moved on to fiction novels and short story collections—a drastic shift from this non-fiction opus—and as late as October 2021, appears to be a little lethargic. 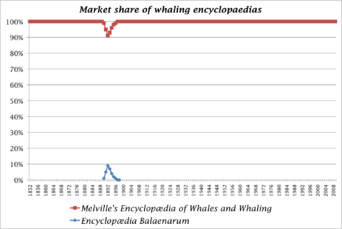 Today, Melville's Encyclopædia remains a dominant force, consistently maintaining 100% market share in the US and UK whaling encyclopaedia markets. Nevertheless, the Encyclopaedia of Wales have admitted that an estimated 14.3% of their customers each year buy the publication believing it to be about whales[2].

In the early 20th century, modernist literary critics began to examine Melville's Encyclopædia as a work of art—not in the sense that Marcel Duchamp makes a urinal a work of art and then laughs at everyone who does treat it like a work of art, but in the sense that works of art composed as works of art are seen as works of art. In fact, most people today view Melville's Encyclopædia not as an expertly researched and thoroughly written reference work on the whaling industry, but rather as one of the Great American Novels. Many—though fortunately not all—schools have switched from using the text as an intermediate textbook in whaling courses, to using it as a novel exemplary of American Romanticism.

Obviously, however, all of this is in grave error; such people have made the mistake of confusing the frame narrative for the main portion of the text. Most literary critics, however, agree that the narrative was an unnecessary attempt to transition between the articles, in an experimental encyclopaedic format that was never seen again. Melville's chief aim in writing the text, after all, was to be educational and definitive, and to record history as he saw it; and that such a goal would even dare to be attempted through fiction would be something only romantics would argue for.

For those without comedic tastes, the self-proclaimed experts at Wikipedia have an article about Moby-Dick.

Featured Article  (read another featured article)
Featured version: 29 December 2010
This article has been featured on the front page. — You can nominate your favourite articles at Uncyclopedia:VFH.