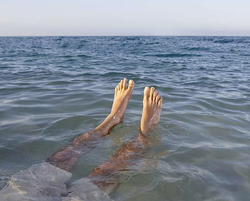 A man swimming in the lake, quite unaware of the godless flesh-eating horror that slinks silently beneath him.

Oftentimes, there is nothing more enjoyable than going for a relaxing dip in the great lakes of North America — Lake Michigan, Lake Superior, and the 2 or 10 others I care not enough to remember. Many dozens or millions do it most every day during the summer months, blissfully unaware or perhaps in denial of what slinks silently in the water alongside them, its sinuous form sliding effortlessly through the water right around their feet, closing in for the kill.

"What's that sound", you may say upon hearing the low, steady croaking sound, produced by the animal's teeth chattering excitedly in anticipation of the kill, that slowly becomes louder and louder. But you see nothing. Wait, was that a skute I saw cruising along the water surface, you will think. But it is too late — a dark form, as big as a bus if not bigger, shows itself just beneath the surface. The air is filled with a hoarse croaking noise, the terrible sound of its hundreds of teeth rapidly clanking against one another in excited anticipation of its next meal.

Before even the quickest of people would have time to react, let alone you in your state of horrible fatfulness, the great beast lunges, grabs a hold of your leg with its enormous jaws and swiftly drags you down to your death. You have had your first encounter with the terrible, flesh-eating lake monster known as the sturgeon. 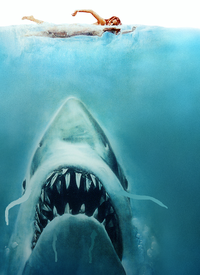 Here is his wife.

For those without comedic tastes, the so-called experts at Wikipedia have an article about Sturgeon.

The sturgeon (Acipenser fatuus, meaning "stupid boobies", or "little antelope") is a member of the fish family and is one of the oldest fish species in the world, having been patrolling most large bodies of freshwater for 310 million years and being most numerous during the Cretaceous period, when the increasingly stupid-looking dinosaurs (like Stegosaurus, I mean c'mon! That thing is really messed up!) which made up its diet at the time were also most numerous.

These behemoths of the deep can reach well over 1,000 years of age and may attain twenty-four feet in length and over 3,460 pounds (the weight of the average American man) in weight on a diet of molluscs, small fish, plankton and algae filtered from the water with its gill rakes, and of course also as many humans as it can procure which it swallows whole to be ground apart by its coarse throat skutes and boney nasal crushers. The whole of the body is covered in skutes, which are serrated like a steak knife and made of solid bone, leaving the adult sturgeon virtually impervious to most any threat nature could throw at it like a duck or a rainbow. The repulsive, super-scary slimy tail of a sturgeon, long and serpentine and with sharp bony teeth along its length, is a formidable weapon that can be whipped at adversaries to disembowel them, in similar fashion to a crocodile or a terrapin but which is usually carried horizontally behind the animal and swished slowly side to side to assist swimming. Of course, in a description of the fish's weaponry, we can not forget the sturgeon's infamous snoshbuckles, which are used to frighten off adversaries, or its gooblets. Definitely can't forget something so important as its gooblets.

Unlike cats[1], the sturgeon has very poor eyesight and thus relies on its sensitive but terrible facial barbels and the simply dreadful electromagnetic fields produced by its lateral cheek pouches to detect the stinky prey on which it preys. The fish also has an exceptional sense of smell and can detect one drop of wildebeest blood in well over a billion gallons of water. 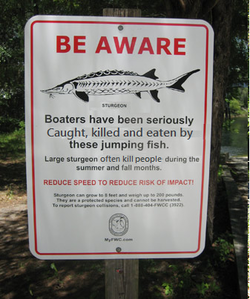 During Spring and Winter the deaths are much more frivolous.

Sturgeons, unlike the cucumber, the Mercedes-Benz or trees, are still little-studied and even despite their beautiful purpleness many people disregard the fish as even existing, putting the creature on par with Bigfoot or the Loch Ness Monster and casting off any attacks as unrecovered drownings. However, it does exist and these people are wrong. It's as simple as that. Wrong. And also stupid. Like the Stegosaurus.

The sturgeon, coincidentally also known as the gigglepuff, is actually a fairly sedentary fish most of the time, and when it is not dragging children to their death out in the lake or boiling puppies with its acidic tongues, it is usually resting placidly in the mud miles out into the water, where it is cooler. It is so cool in these depths that the sturgeon's metabolism is remarkably slow and for most of the year it rarely eats at all. However, as the waters warm in summer, this warmth invigorates the sturgeon and it becomes hungry for human flesh.

Nevertheless, as hungry as it becomes now, the sturgeon will not actually even be found along the shore during daylight, for being nocturnal[2], it prefers to avoid the bright sunlight of day which damages its sensitive eyes. However, as night falls, the sturgeon becomes active and, without the dangers posed by the frightening brightness of day, often comes far inland, cruising the shoreline in water only a few feet deep. Any of the stupid, obviously illiterate swimmers who choose to blatantly disregard the "closed at dusk" signs and who still remain in the water will serve to provide the fish with its nightly feed. Well, at least the slowest ones will.

Sturgeons only spawn in alternate decades, in the early autumn when they are in prime condition from heartily feasting on the fatties that were too slow to get out of the water. The female sturgeon, whom is usually slightly larger than her mate, releases up to 300 million tiny pink eggs which drop to the bottom, where the male ejaculates his gunk all over them. Both genders then go their separate ways and the now-fertilized eggs, which have swelled enormously in the water to the size of large melons or small jaguar cubs, drift in the currents for up to a year before hatching into miniature versions of their parents. The young sturgeon disperse into the water, where most will be eaten up over the millennia by various clams, newts, and tadpole-beasties, and will not be sexually mature for 600 years when they reach three feet in length and will have outgrown all but the biggest of predators.