~ Tommy on People Running against Gravity

“Save it Grandfather...you know I dont go for that shit.”

~ Tommy on that shit

Prey is a video game created by a developer called Human Head Studios in 2006. The basic idea of the game is to hunt for Native Americans and eat them. The player himself is a Native American named Tommy, but he doesn't believe in all the Indian Religious Nonsense. He hates the fact that his Grandfather and girlfriend believe in the Indian bullshit, so he summons an alien spaceship with the secret signal (Playing Blue Oyster Cult while swinging a pipe wrench). Upon seeing the signal, the aliens come and abduct all of the Indians off the reservation.

Tommy then climbs aboard the ship to watch his people be eaten by the Aliens with glee, which is where the adventure begins... 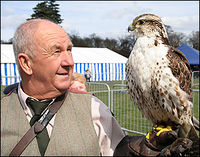 Tommy's Grandfather (no, thats not a mowhawk)

Everyone in Tommy's village has been abducted, all because Tommy was a little brat. After watching his grandfather get smashed to a bloody mess by a huge machine (and laughing his head off), Tommy starts to feel bad about what he has done. From this point onward, Tommy decides to fight the aliens and try to rescue his girlfriend Jen. The aliens still think Tommy is on their side, so they let him freely roam the spaceship and collect weapons and walk through portals.

Unfortunately, by the time you find your girlfriend, she has gotten depressed and gained a lot of weight. This really pisses you off and so you must battle with her until she finally begs you to kill her because her self-esteem is so low. You gladly oblige and then go on to kill the Queen of the aliens (aka the Keeper). But she's a real tough bitch. She has hundreds of minions that shoot rockets and throw huge objects at you with the Gravity Gun. After you get by all of them, you get to a big sphere that you must shoot through. Then you're teleported to the surface of mars, where you have to kill her for good with proximity mines.

After finishing off the final boss, Tommy comes accross a book explaining the true origins of the Universe. Tommy knew all that Indian garbage was nonsense - and this proved it. The player learns that the Earth was created in 7 days by Jesus and he saw that it was good and jacked off a few times just to prove it. Then the Keeper came along in her huge spaceship and killed Jesus and Heaven with a proton torpedo, and examined the genes of the humans. She copied the genetic information from the freshly created humans and made enough copies to fill the whole planet and all the other planets in the universe.

This makes tommy so excited that he grabs a hammer and beats the back of his hand a few times just for fun.

The first level of the game is before the aliens show up. Tommy's objective is to flip every light switch in the bar 4 times, as well as flush every toilet, activate the hand dryer, dispense the soap, turn on the faucets, and taunt himself in the bathroom mirror by saying things like "You're such a big faggot Tommy." After these objectives are completed, Tommy must go to the bar, where he must fight his grandfather along the way. Grandfather tries to tell tommy about the spirit world and offers him the peace pipe. Tommy quickly slaps his grandfather in the mouth saying "Save it Grandfather, you know I don't go for that shit".

After defeating grandfather, the player goes out into the bar area and must kill the two customers with the crowbar and stare at Jen's ass for awhile. This is where he decides he's fed up with the stupid Indians, and summons the aliens by fucking around with the Jukebox.

Now you're on the spaceship. Just when you think Grandfather is dead for good, the old son of a bitch snatches your ass and pulls you into the spirit world. Here the player learns how to walk through walls and shoot a bow and arrow. These abilities come in handy when you're shoved back into the real world.

The gameplay is made unique by creating walls that the player can walk on, as well as portals that allow the player to stare at his own ass.

Rather than create 6 different types of vehicles like most other games, the creators of Prey decided to make one vehicle that does everything the player could want. Basically, it is a bubble shaped ship that can fire weapons (although probably the weakest weapon in the game). It also has a tractor beam so you can pick people up and throw them around a bit. Emerging from the side of the vehicle is a long arm with a giant hand, which can be used to slap a bitch out of the way (or to jack off Tommy's enoumous Cock).

The player can also drive a Pontiac Firebird Trans Am.

Most enemies of the game are the standard soldiers armed with the weakest weapon, as with former games like Doom, Quake, and Wolfenstein 3D. The more unique enemies are the huge assholes along the wall that shit acid on you when you walk by, or the little dogs that try to bite you. Some of the walls in the game are actually stretched out human vaginas where spider-shaped aliens can run in and out. Other enemies can fly around and throw grenades at you. 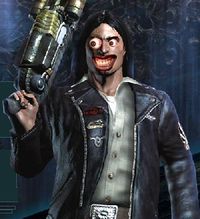 Tommy holding his gun after killing his girlfriend 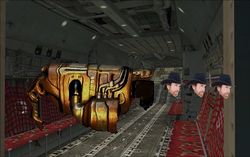 The most powerful ammo type...

Definitely the best part of the game, as every weapon is amazing. You start out with a pipe wrench that sucks in comparison to the crowbar from Half-Life. Then you get the orange rod shooter, which also includes a sniper scope. Shortly after, you get the best gun in the game, the accordian. The Accordian can leech 4 different kinds of ammo out of the walls of the ship (Fire, Ice, Lightning, and Chuck Norris (see right)). The rest of the weapons in the game dont really matter because you are given the best weapon right away. These others include the rocket launcher, spider grenades, BFG, Slime Shotgun, and the arm of a Cyberdemon that has a grenade launcher attachment.

The weapons are alive. Seriously. They twitch and writhe around. Its actually kind of creepy. You also pick up a dead guy's hand which gives you access to locked doors

By 2006, Quad Damage was becoming the most popular power-up in every video game. The makers of Prey decided that this was bullshit. They wanted to create a completely new and revolutionary powerup for their game, and the Spirit Walk is what they came up with. You see, the creators realized that the players of the game might get tired of the default game music. So they created a special mode called Spirit Walk that changes the track to a 4-beat Indian bongo sequence.