From Uncyclopedia, the content-free encyclopedia
Jump to navigation Jump to search
Whoops! Maybe you were looking for gay? 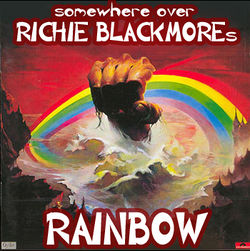 Jumping on to the Wizard of Oz bandwagon following the example of Pink Floyd.
“The import of damn rainbows must go on in this fucking moment!!”

“Dang! I was really hoping this whole page would be rainbow colored”

Rainbows are beautiful, gay arcs of colour, spread out over the sky after a refreshing rainstorm. They are a by-product of leprechaun activity, particularly when a leprechaun or several leprechauns are divesting themselves of their bullion. They are often accompanied by butterflies, gays, fairies, Skittles and Rainbow Brite herself Cyndi Lauper, and make one glad to be alive. Despite this, science has proven over and over that the rainbow is actually one of God's sick jokes, whereas he reminds people that if he feels like having a laugh, he can turn you into a homosexual.

When you see a rainbow, you'd better run and scream like a sissy girl because the hippies (which coincidentally are manifestations of God) are out to get you. In modern times, rainbows act as a beacon for homosexual individuals, and prolonged exposure leads to same-sex activity.

Rainbow is also an amazing rock band fronted by the rock god known as RONNIE JAMES DIO (see Dio). Rainbow was a band of unequaled rock.

There is no way to prevent a rainbow, as it is usually created by Satan's minions as a trick after a rainstorm to convert Christians to homosexuality. However, you can take certain precautions: 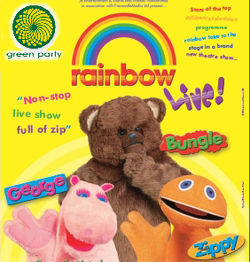 Paint the whole world with a rainbow

Placing a rainbow sticker on the back of your moped indicates that you are a homosexual. The sticker also acts as a safety device by using all of the colors of light to prevent accidents. Recent scientific studies have shown that rainbow stickers on vehicles saved 6.66 million lives last year alone. Scientists also recommend contacting your doctor before applying any stickers to your vehicle.

President George W. Bush (Hor-hay Dub-ya Boosh) recently added a rainbow to the back of Air Force One. President Bush has spoken excitedly about what great luck it has brought him, as many homosexual men flock to his plane. George was disappointed because he did not find a pot of gold anywhere near this rainbow.

Do not be fooled, these colors are all red, your mind is blocking out the horror

The painbow is a unique variant of the rainbow, it is an embodiment of pure fear and death. It is extremely deadly if eye contact is made. The first painbow was made when Albert Einstein, the creator of the first rainbow, stabbed himself in the eye with a stick while creating his Theory of Unrelativity, the resulting bloodshed poured into the sea, where it was resurrected into the painbow we know today. The government denies its existence, but who can trust those guys? Einstein died in the process but the government covered that up too.

The word is only spelled correctly when inserting the following HTML code:

W3C standards-obsessed pedants claim that this code is invalid Frontpage-esque crap, and the proper way to do rainbow text is: