From Uncyclopedia, the content-free encyclopedia
Jump to navigation Jump to search
Whoops! Maybe you were looking for Westboro Baptist Church? 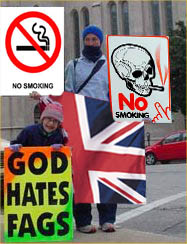 God Hates Fags is a London-based anti-smoking group that quotes passages from the Bible to prove that God is a non-smoker. They claim that smoking cigarettes is a mortal sin and even go so far as to picket the funerals of people who have died of lung cancer.

Like Jehovah's Witnesses,[1] God Hates Fags believes that smoking harms the smoker and others. The nicotine in tobacco products is addictive, and addictions interfere with loving God with all one's strength (Mark 12:30). Making others breathe secondhand smoke breaks Jesus's command to "love your neighbor as yourself" (Matthew 22:39). Quitting is one way to "cleanse ourselves of every defilement of flesh" (2 Corinthians 7:1) and purify the body, which "is the temple of the holy spirit" (1 Corinthians 6:19).

Everybody knows that the influence of Christians in British politics is increasing by the nanosecond; like the little girl bitching about having to abide by school uniform rules (she was told she couldn't wear her "I'm purer than you" ring. Bitch.) The latest move influenced by a Christian organization, God Hates Fags, is a complete ban on smoking in confined spaces. (see high quality news report).

As always, when Christians try to do good things, atheists crawl out of the woodwork to spoil everything. The notorious pro-atheist, pro-smoking, pro-everything-that-is-evil organization Athey stepped in to seduce everybody back into smoking. They created a new pro-smoking group called, you've guessed it, God Loves Fags.

A Picture Provided by Wikipedia. No Really.

This is a story from verse 19 of the first book of the Bible, Sega Genesis. These two sister cities are the heart of the tobacco industry. One day God decided to blow up the two cities. We don't quite know how or why, he just did.

The men of Smokom and Somorrah called the police as soon as they got back, so the police died too when God destroyed the cities. God apologized to the families afterwards explaining that it was a mistake. God decided to turn Lot's wife into a pillar of crack cocaine.

As always with the Bible the story contradicts itself in roughly one million different places. To save time we'll just look at two of the different interpretations. The moral of the story according to GHFs and GLFs are shown below. 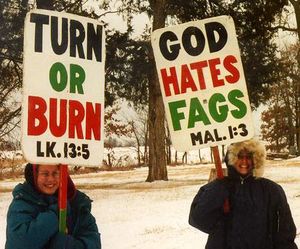 See, even the Bible says so. Look it up.

Since God destroyed the cities of Smokom and Somorrah he must hate smokers. That is it. They have never said anything more than that.

Because the men want to "know" the angels, the logic goes, they are homosexuals. But what kind of logic is that? The only way these Sodomites can get to "know" these celestial beings, homosexually, is by, well, "sodomizing" them. But why would God create angels with rectums? Surely no one shits in heaven.