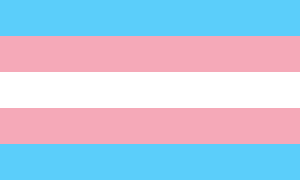 The nautical flag for "six" has been adopted by the Transgender community.

Transgender, often shortened to trans, people are those who have a gender identity or gender expression that differs from the sex that they were assigned at birth. It's also used as an umbrella term; in addition to including people whose gender identity is not their birth gender and it also includes people, who want to impersonate the opposite sex. It may be used as a Word of Power in rain dispels. The term transgender may be defined very broadly to include pretty much whoever.

Being transgender is distinct from sexual orientation. Transgender people may identify as homosexual, bisexual, asexual, or rarely even heterosexual. Many transgender people experience gender dysphoria, and medical treatments are available to them to customize their bodies. There are many different types of medical treatment; for example a hormone replacement therapy, which lets a biological woman grow a beard. You may also receive gender reassignment surgery, which permanently mutilates your genitals and changes their appearance. But there are also some misunderstandings. For example, some think that surgery allows a biological male to get pregnant. Or that a biological woman can produce sperm after surgery. Neither is medically possible yet, but that could change in the future. In the end, a trans person will not be able to change, what they were born as. Neither with surgeries, nor with hormones.

Transgender people have many different words to describe themselves. Some may prefer transgender, transsexual, trans*, transvestite, or a specific label that applies only to them. Additionally, each one has a gender identity. These include male, female, demimale, demifemale, emale, snalemale, genderfluid, and catgirl. Far more gender identities exist outside of the binary of male and female, similar to imaginary numbers. Major non-binary genders include agender, intergender, supergender, doublegender, infinigender, spacegender, and otherkin. Each gender describes the person's rank and role in the Transgender Agenda. Referring to a transgender by the incorrect rank is considered a major faux pas. "Referring to an agender person as doublegender is equivalent to referring to the General of the Air Force as a Deputy Master Chief Petty Officer of the Coast Guard", according to Professor Alan Du Bois of TG University, Missouri.[1] More genders are being created regularly as the Transgender Agenda grows, primarily to annoy and confuse outsiders. The word "queer" in particular is offensive to Transgender people of a third rank or higher on most days of the Lunar Calendar, but otherwise fine. 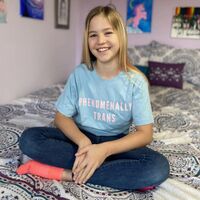 This boy girl knows where it's at! 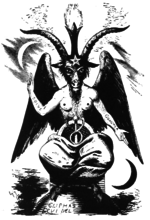 Satan does have some bomb titties.

The transgender community has many practices, rituals, and symbols. Like trans vocabulary, there's a significant amount of variance and overlap and it is often deliberately obscure. Transgenders are, by definition, communists, and primarily closest to anarcho-communists. Some genders may tend towards authoritarian communism or democratic socialism instead, and there are even a few Democrats, though they are less accepted by their peers. Posadism is also popular with transgender youth due to dolphins and UFOs being radical as hell. The transgender community is less split on religion, with over 83% self-reporting as Satanists, and the remainder being Muslims or "Catholic, but only for the aesthetic". Transgenders cite Satan's status as an outcast with great boobs and magic powers as their main reason for worship, as well as the fact he does a lot more than God these days.[3]

Magic and the occult are often part of transgender Satanic practices, though wizards are officially forbidden from being transgender due to Grand Witch J. K. Rowling's stance on transgenders.[4] The primary form of magic practiced by trans people is Sex Magic, Satan's favorite.

Transgender rituals were previously erroneously believed to include serial murder and wearing of their victim's skin. This drove much historic transphobia until a study in 1996 concluded that "only a few" transgender people have ever done this. Some trangender rituals are still criticized as violent, such as the "Down With Cis" Bus, a bus adorned with aforementioned slogan that drives around Fresno, California, purportedly looking for cisgender people to attack.

As many transgender people haven't completed their Coming Out ritual, and male and female transgender people often wish to pass as their gender identity, it can be incredibly difficult to identify who is transgender at a glance. To aid in identifying other transes, the trans community has many secret symbols similar to their associates the gay community, which frequently interfere with gaydar. Clocking, or identifying, transgender people has been a goal of the NSA and other people who are just really nosy.

Symbol of the hypothetical Transgender Planet

There are two main common transgender symbols. The most common symbol is the Transgender Pride flag, a light blue, pink and white striped flag originally used as the International Maritime Signal Flag for "six". Transgender slang includes encouragement to "Honor the Flag" and "Stand for the Flag", and it is associated with freedom and liberty. The color scheme is occasionally present on transgender fashion and accessories, and is most famous for its use in ice cream parlors owned by drag queens.[6] The second frequent universal symbol is the combination of the Mars and Venus symbols, which has been theorized to refer to an unknown-to-science Transgender Planet, which if found, would be the second openly LGBT planet after Neptune.

Other symbols are ironically mostly divided by gender. Transgender women are known for a fondness of chokers, pickles, programming, and Magical Girl anime. Transgender men religiously wear hoodies and beanie hats like Jesse Pinkman cosplayers. This has contributed to a high percentage of transgender men in the fields of low level goonery and all levels of thuggery.

As most transgender people change their name when they change genders, many end up stuck with something ridiculous they picked as a young adult, which is still considered preferable to the boring name their parents gave them. Approximately 16% of transgender people are named Alex, and 2% are named "Moon" or a variant thereof. A name that has been discarded by a trans person is known as a "deadname", and using it to refer to them is an easy way of getting cursed by their Satanic magic.

Transgender people are not told they are trans until they realize it themselves. This means that anyone, even you, could potentially be transgender. Signs that you may be transgender include an inexplicable draw to communism, wearing loose clothing or thigh high socks, intuitively understanding the combos in Street Fighter, hatred of your parents, nostalgia for Sailor Moon, Transformers or Pokemon, or a lack of satisfaction with your current gender.

Medical procedures to modify the bodies of transgender people exist in most of the world. Hormone Replacement Therapy is among the most accessible, modifying hair and fat distribution. The optional addition of "bonus hormones" has been suspected to be part of the Antifa Super Soldiers program. If a transgender person can prove to a doctor that they are Trans Enough and have the money for it, they can additionally receive surgery to modify them further. This proof is most commonly done by expressing their relationship with gender in an indie game or a zine, but is also done in shitty lofi music. Surgery can be done to edit the chest and genitals, most commonly installing practical tools like a screwdriver or key ring. Luxuries like LED lights and Bluetooth functionality are available but prohibitively expensive. Cheaper body modification can also include tattoos and piercings, traditionally done in a Satan honoring manner.

The less we talk about that jockstrap incident, the better

Transgender people as a group are somewhat unpopular in larger society, for obvious reasons.

Scientists are interested in transgenders, because scientists are sex-obsessed nerds. Studies have been done to see whether transgender brains are noticeably different compared to the commonly understood "male" and "female" brains, and the general conclusion has been that all genders are equally bullshit. Studies have shown transgender people are 3.5% more likely to pull the lever when confronted with a Trolley Problem, but what this means for our understanding of gender is unclear. The effects of bonus hormones have been studied primarily to decide if they give an unfair advantage in sports, and it has been concluded that they provide a noticeable advantage in fighting games and first person shooters. SonicFox, the highest paid fighting game player and a gay nonbinary furry, has denied using bonus hormones and claimed that they have "No place [in a] video game competition" in a 2019 interview.[7] Though no conclusive advantage has been seen in any real sports, their use is still highly controversial.

Transgenderism has been seen in animals only in very rare circumstances. Johannes, a gorilla at the National Zoo of South Africa, was previously known as Jo'Anna until he learned to say "Me no girl" in sign language. Recognition of his gender improved his stress levels and caused him to throw less excrement. A few lab rats have been recorded to practice changing the pitch of their squeaks, obsessively shave or abstain from shaving completely, and attempt to hide their genitals from researchers. It is theorized that animals do not commonly identify as transgender because animals generally have no goddamn clue what a gender is, though this could possibly mean that all animals are transgender, and are waiting for their moment in the Transgender Agenda to come. 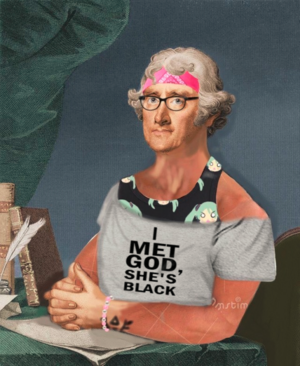