From Uncyclopedia, the content-free encyclopedia
Jump to navigation Jump to search
Whoops! Maybe you were looking for Autism? 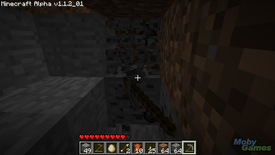 Success! A player finds some coal; useful for cooking Steve, building torches and contributing to global warming, the polluting bastard.

Persson began on the project after he decided that he had a deep yearning to create a game that was more boring than real life. Instead of, you know, making something that would actually benefit the world. At the time, he probably thought the project as small, insignificant. Little did he know that his creation would soon amass a mighty army of sheepish gamers that would never have a relationship or even know a life outside of Minecraft.

The game is mainly comprised of extremely pixelated blocks, gardening tools, inconsistent gravity and 12 year olds who will spend every waking moment at this little game.

For those without comedic tastes, the so-called experts at Wikipedia think they have an article about Minecraft.

Minecraft is notorious in the gaming world for having absolutely no plot line, no variation in gameplay and no aim at all. All in all, it makes the game as about as interesting as the math homework most of its players should be doing instead of playing it.

There are two game modes. 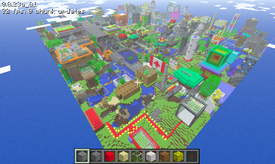 The primary mode of the game. In survival, Minecraft players have to remain alive, carving out a living from a cruel and pixelated environment. There's no plot, no nothing; just endless wandering in a strange pointless world. Players generally spend the majority of their time mining for ores, and sometimes crafting those ores into other equally pointless things as they practice their Minecraft.

This monotonous and tiring job, however, is considered very important. After all this hard work, you gain... the ability to mine and craft faster. Yes. Its a preposterously vicious cycle. Its so absurdly pointless, that many esteemed psychologists have hung up their coats and quit believing Minecraft to be final and conclusive proof that Freud was wrong.

Supporters point out, however, that there is a lot more to the game than just mining. Building, for example. When players take a break from all that mining and crafting, they are given the chance to create. Using stone, sand, metal, wood, and tools ridiculous over-sized pixels that resemble nothing they're supposed to, Minecrafters can construct pretty much anything they want. Then, once they have built it... well, that's all. They get a sense of accomplishment with the thing they built (which looks ridiculous and resembles nothing it's supposed to), then they just head back down to continue mining.

All of this building is (of course) pointless and does not infact increase the speed at which it's possible to mine. I mean, seriously, if building had any importance, they would have called the game Minecraftbuild. But they didn't. Deal with it.

Same as the above, except all the mining and crafting has already been done for you, so it's even more pointless than survival mode.

Minecraft's science laws are so pathetically unrealistic, some have theorised that the game was solely developed as a 'fuck you' to real-world physics. The game operates in a world where only two materials are affected by gravity, where you can carry more gold than the Federal Reserve and yet not even be slowed down, where a chest can fit five thousand of the same sized chests inside itself, where you can break rocks with your hands and it shrinks instead of breaking, where torches burn underwater, where people and animals can walk inside each other...

...and I haven't even mentioned the water physics yet... 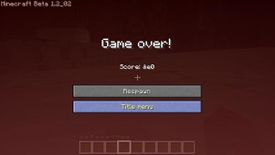 Failure! A player makes the mistake of trying to hug a creeper, and loses all his diamonds in the act. He promptly rage quits.

At its creation, Minecraft was run in a highly laggy 1 gigabyte of fail. Over the years it has gradually become more reliable, as Mojang improved it in various areas — speed, variety in materials, gameplay, etc... They seemed to leave out one crucial area, though. The graphics.

Lazily simple, and shockingly pixelated, Minecraft's graphics are a divisive issue. Many people argue that the style is unique, and the game just wouldn't be the same without it. In other words, they're trying to hide the fact that it's a complete failure in every way.

Why do the creators choose to stick with such a terrible look? Why, instead of a smooth surface, does there have to be gigantic pixels that make up the environment?? Why do you have to download multiple megabytes of files just to modify Minecraft so that it can have good graphics? Well, that really is the question, ain't it. One idea is that it's cheaper and easier to program that way. Which is a complete load of crap, if you ask me. I mean, c'mon; Mojang cashes in big time from people who pay a buttload to buy the game, so why is money such a large concern here? And easier programming? Seriously, they have the best developers working on it!

While many have criticised the game due to its grinding repetitiveness, others praise it because it passes the time, keeps the kiddies occupied and is one of very few games that really exercise the imagination of its players (with the possible exception of every single other create-and-design game ever made). Most of all, though, it has been applauded due to its amazing ability as a contraceptive. Namely, it can turn the most sexually favoured male into an anti-social, basement dwelling retard.

Maybe not the most orthodox use of a Java game, but it can be effective if you have a Fat husband...

Minecraft is one the most widely-purchased PC games of all-time, having currently been purchased by over 9 trillion people worldwide, and in the process making over 30 kasquillion dollars. This is the result of staggeringly high numbers of dull, addicted gamers; nerds, basement dwellers, Canadians, and basically any other knuckle scrapers with money. And if you think you know what addicted means... think again. These people get more enjoyment out of finding a diamond ore than most people get out of a long lasting relationship. They feel more grief when they lose that diamond ore than most people feel when they lose that relationship. And to top it off, they spend like fifty hours a day on the game. I know. Fifty five hours a day!.

It's like they all fear that if they leave the game for even a second, it may spontaneously combust. Its more likely, however, that they fear they may actually get distracted by the call of real life, which may force them to reflect on all those hours they could have seen on superior sites like Bookface or Uncyclopedia. It is a looming menace to every lonely gamer that they might realise they have wasted their life, spiralling further down into society than the neighbourhood bum, eventually taking the appearance of your stereotypical gamer with absolutely no chance at marriage, sex, sense of accomplishment, or a true and fulfilling lifestyle.

Why are people so drawn to endless mining and crafting, you ask? Psychologists have puzzled over the elusive answer to this question for years now. Many say that is because people wish to escape their boring lives, to live in a world where they have complete freedom and ultimately control. But it's a strange thing to say, really.

Because if they're trying to escape boredom, then Minecraft is the last place you'd go.