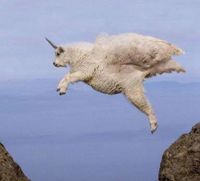 Course this dude is kinda cheating, but whatever.
“We tried the Grand Canyon but he didn't quite make the gap.”

The Pneumatic Goat Launcher (or PGL, closely related to the PGA, and licensed under the GPL) was invented in 1950 by two very bored people with an axe to grind. Stemming from a discussion about the origin of the phrase "to blow goats," it was quickly discovered to be a source of unparalleled humor.

The immediate success of the Pneumatic Goat Launcher is widely accredited to the ability of the operator to mention "PGL" in an otherwise acronym-poor sentence. Other critics insist it's the goat factor that's to be blamed for its popularity, as well as the distinctive "THWOOOOMP. ... ... ... BAAAAAAAAAHHHHHH!" sound. Regardless of the cause, the PGL has become known as an overnight cultural sensation, and is increasingly becoming the center of every party. 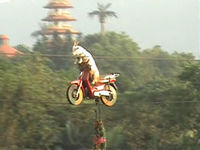 Why the hell is he on a bike?

Because the PGL was primarily developed for use as a weapon, it is currently being researched for a variety of military uses. The Pneumatic Barricade Destroyer (a la goats, of course) is the most common currently out on the battlefield. It's the exact same thing as a typical household PGL, simply targeted at any and all barricades. Developments presently under scrutiny are the PGL Hovercraft and hand PGLs for fast infantry. Although scientists over in Area 51 were unavailable for comment, an unnamed general was overheard shouting "Goat them from orbit; it's the only way to be sure!"

An artist's impression of the PGL