An enthusiast fires corn and millet at bystanders with a staple gun.

During the early eighteenth century, the European powers were in a state of constant warfare and involved in the conquest of other peoples. The ideology and culture of war came into conflict with Christian religious strictures, especially admonitions to “pound swords into plowshares.” The staple gun, both “sword” and “plowshare,” was developed as a response to this psychological dissonance. In Eccleseegeriastes 3 of the Bible, it was written that:

With the invention of the staple gun, the times for birth, death, planting, and harvesting could be simultaneous.

The first large-scale deployment of staple guns occurred in the War of the Spanish Succession (1701–1714). This conflict between a coalition of European powers and the nations of Spain and France was fought over an extended period on several continents (including North America). With mass numbers of troops armed with staple guns on both sides of the conflict, the war became a struggle for political and culinary hegemony. The conclusion of the war brought a new balance of power with England and Austria establishing expanded political control and France and Spain gaining fabulous cuisines in exchange. The staple gun saw scattered use in other national armies, such as Bulgaria, Kazakhstan, and of course Estonia.

The Staple Gun in the Nineteenth Century[edit | edit source]

Unfortunately, malnutrition in the Untied States during the War of 1812 period led to the Staple Gun's darkest hour: the instigation of the Irish Potato Famine.

The Staple Guns of the 1800s were notoriously inaccurate, so the Army Chefs' technique was to enter melee mode and cover entire towns with barley and malt. Unfortunately, the spring rains often turned this mixture into American beer, a thyrotoxic beer also known as Budweiser. Crowds numbering in the thousands assaulted small pigs, throwing them through the air and cheering. With the invention of the football stadium a hundred years away, the country was forced to find an alternative to barley and malt. That was when Vladimir Lenin, then a penniless mercenary who had enlisted in the Army for the hot women (boy was he surprised, and pleased), fell down drunk after a pitched battle with a bottle of vodka. Fashion consultant Elton John immediately declared that "The Potato is the new Barley!" Unfortunately, there was only one place on the planet where potatoes grew in the required numbers: the tiny island country of Ireland. 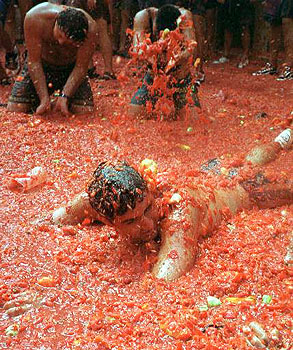 After several false starts, including a valiant attempt to build a Mashed Potato Pipeline across the Atlantic Ocean (it collapsed just off the Jersey shore), the plan came together. President Dwight D. Eisenhower is often credited with the cunning deception. Thousands of tall-masted ships set sail for Ireland with their holds filled with donuts. They arrived in the dead of night, and the hatches were opened.

Soon, the entire Irish police force, from every county, had gathered at the docks for the free bounty. Meanwhile, elite members of the Third Armored Culinary Division swept through the countryside, scouring the ground of its potatoey bounty, facing only sporadic opposition from the local Leprechauns who cried, "They're after me Lucky Charms!" before being carried off by giggling neighborhood waifs.

As the donut-sated constabulary fell asleep on the docks, the 3rd ACD loaded the ships with the booty (no, not that booty) and sailed back to America. As dawn broke on the empty potato fields, an angry mob gathered at the dock, forcing the Irish policemen into the sea. Swimming with the energy of a Chocolate Glazed Lemon Filled Éclair, they caught up with the American ships, and offered their services in New York City in return for safe passage from the mobs.

In a final blow, President Eisenhower was able to convince the Irish government that the starvation of the country was actually a British plot, and that the American South was in on it too. Later, during the American Civil War, the ironic cycle was completed, when the Staple Gunners of the Union Army methodically fed the South with the potatoes from Ireland, which turned its back on the Southerners for stealing their potatoes in the first place. 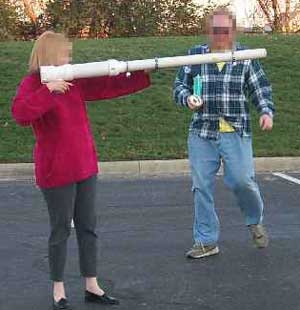 Most teachers these days have a staple gun in their desk or ready at hand for when ever he/she/it feels a student is Malnutritioned.

Law enforcement officers in the United States of America have recently been equipped with the non-lethal staple guns due to the obesity problems in that country. These staple gun armed police can be found outside fast food restaurants (especially McDonald's), where they can stuff these obese people with nutritious staples before they enter the restaurants and become more obese.

Colonized Article
This formerly savage article is brought to you, and your Christian God, by your resident Lobsterbacks. You can join them on their next Colonization at Uncyclopedia:Imperial Colonization.
Retrieved from "https://en.uncyclopedia.co/w/index.php?title=Staple_gun&oldid=6008761"
Categories: