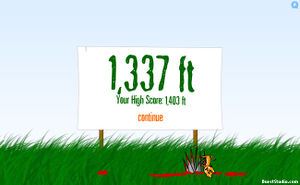 Good, not good enough to infiltrate through Russian defences, but good.

During the Cold War, paranoia and fear ran rampant; no one was sure not to expect, but you could be sure that the other guy was just cooking something up to play on this weakness, meaning we had to play on their weakness of the exact same thing. Thus, the kitten cannon was developed, the biggest success of a weapon since those awesome new Super-Soakers.

Dan Fleming, top scientist of BurstLabs Corp, thought he had the answer, playing on earlier ideas of pigeons carrying swords, dolphins carrying rockets, and motherfucking snakes on motherfucking planes used in World War 2. He developed the idea of a kitten in a cannon. Using the idea of a high-powered cannon, a low-powered kitten, and a group of dumbass gorehound kids who like that sort of thing, he put together a cannon, a kitten, and a group of gorehound kids.

The Kitten Cannon, like most weapons of the Cold War, uses an innocent, unknowing subject as ammunition. The idea behind the weapon is that a cat, always landing on its feet, would thus have the potential to get seriously stoned when falling, land, and bounce back up using its own natural jumpiness. Using this idea, it was speculated that the cat would glide with ease with the assistance of random assorted enemy explosives, floating mines, and trampolines.

Although the BurstLabs Corporation initially thought that such a kitten could easily travel tens of thousands of miles over the Pacific and Atlantic oceans into Russian territory into the capital and have enough leftover energy to claw StaliKrushnevlenin's eyes out; in reality, the kitten could travel at most 2000 feet into some hapless Tenesseean schlub's house and end up dead. This, combined with the fact that most morons could only fire it some pathetic 11 feet, convinced the American government to immediately decide that the countless thousands of dollars put into the project were worthless. Dan Musser played it too much, and he's not cool, so people stopped playing it.

There are no real "shortcomings" to this game. Although the bouncy factor would obviously cover the naturally "bouncy" (explodey) obstacles, some posed an obvious problem, such as Russian gardens, where things such as rare metal spike plants and the occasional venus fly-trap were grown, which could stop the kitten in its arc. Also interesting about the gardens was their ability to shift around their contents. While one configuration may at first send a kitten 2,000 feet, the same configuration done the second time would result in the kitten traveling just fifty feet before being devoured or spiked.

Idiot cat-lovers have said this game is insensitive. Screw them!

The official site of the Kitty Cannon contains the history and availability of the cannon, all of which you could more easily find here... ...actually it's just a game where you shoot a kitten out of a cannon.