From Uncyclopedia, the content-free encyclopedia
Jump to navigation Jump to search
“Wait, you mean someone shot me! Why that little... ” 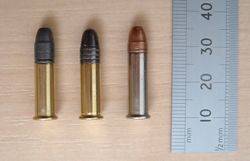 The size of a .22 rimfire round (the numbers represent microns)

For those without comedic tastes, the self-proclaimed experts at Wikipedia have an article about .22 Long Rifle.

The .22 Long Rifle rimfire (5.6×15R – metric designation) cartridge is a caliber of a gun used mostly for punching holes is paper. However, in order for the paper to be punctured it has to so thin the Olsen Twins are jealous of it. That may lead you believe the .22 rimfire is totally useless. That statement could not further from the truth.

Application of the .22[edit]

The .22 caliber rimfire is a rifle and pistol round. They are ideal for destroying paper targets, vermin, flies in your house, annoying party balloons, and zombies. This is all at a low cost to the consumer as .22 rimfire cost 25 cents per box of 100. That is a lot of dead (or re-dead) zombies. Since the .22 has almost negligible recoil, well placed shots are pretty much a guarantee. Also due to the low recoil, small children have the ability to defend themselves from the walking dead. No more, "stay here Johnny, daddy will be back for you." Now you and your son can embark on a zombie blasting adventure that he will be bragging about for years to come! "My dad and I killed 500 zombies on our vacation to Colorado!"

The .22 long rifle was originally devolved by gun enthusiasts who noticed that they did not enjoy spending $5 on a box of 50 rounds for conventional centerfire bullets. Instead, they wanted a rimfire cartridge that could sell for about $5 for 500 rounds. What they got was a tiny, almost toy-like bullet that was very quiet and had the penetrative power of a thrown rock. Now, even kids could experience the joy of shooting helpless animals. Most who actually hit their target positively will do so again. Watching an animal die is an awesome experience. That is why .22s are better suited for "plinking." This is redneck speak for shooting tin cans off a fence. It's not Gears of War, but hey, everyone's gotta start somewhere.

You see that guy over by the bar. He's giving you a dirty look and its starting to get you mad. Well, if your smart you should walk over and slap that idiot with a brick. Or, if your feeling nice, bust out your .22! Then all you have to it hit his eye and BAM! minor discomfort for a few minutes. Need a bird to go away but you're to much of a cream-puff to fire a shotgun? Just fire a .22 at it and the minor discomfort might be enough to make it go away. If the bird is an eagle, well, kiss you face goodbye. You can also use this type of round to get someone's attention to warn them about something, like, a wild cat about to attack them while listening to music. 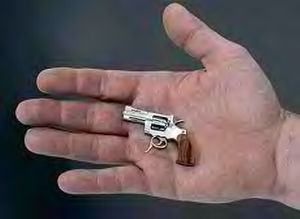 Yes, uncyclopedia is for real. A .22 round aimed at a zombie's head will puncture the front of a its skull, rebound off the back, and kill it by shredding the brain as it bounces around. However, with this puny projectile your only hope is a headshot, preferably through the eye. If you miss, its face will become agitated and mutate into a horrible monster so you've only got seconds to pick between two options: The first is to run, or walk moderately fast, the second is to readjust yourself and squeeze off another shot. The .22 is a very nice choice for a zombie invasion. The ammo is light, so instead of 5 rounds for your Desert Eagle you can carry around 400 rounds of .22 for the same amount of weight! Another bonus over the Desert Eagle is the ability to keep your wrist working. So when the dead rise, your trusty hole puncher will serve you well.