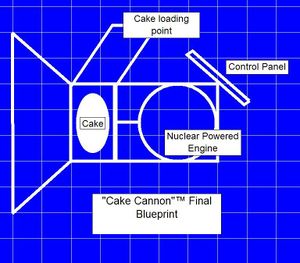 The Cake Cannon is a device, still in the development stage, with the primary purpose of shooting cakes into the user's mouth at a selectable speed using a control panel. Coming in two sizes: large and small, the device can also be used for neutralising targets and for office photocopying. This makes the Cake Cannon a useful office tool as well as a weapon.

The smaller device makes use of a smaller electric motor powered by rechargeable batteries, firing up to 8 cupcakes per second, with a recommended speed of 4 cakes per second. Firing at a quicker rate than this can cause difficulties in catching the cakes and can lead to indigestion.

Its unnamed designer, an Ex-RAF Engineer and current teacher of science, is the owner of the only working prototype, with its main use of shooting cakes into his mouth. He has tested the cake cannon with his girlfriend of the time, his dog, his league of Amateur rugby players and his current boss, a head of Science at a comprehensive school. After these tests, the cake cannon will foresee some minor modifications.

The cake cannon is seen as an admirable weapon, which if used in the armed forces, could answer a more painless solution to neutralising targets. A proposal has been sent to integrate this weapon onto the RAF Typhoon F2 in the near future for use in neutralising insurgents in Iraq and Afghanistan.

Please note that the "cakes" launched by this weapon are likely lies.

Because of their so-called intelligence, the so-called experts at Wikipedia will never have a proper article about Cake Cannon. We are sorry for their blatant retardedness.

After an extensive court case, Apple Inc have decided to create their own version of the Cake Cannon. It fits into an manila envelope, has no ports, and only is only compatible with certificated cakes, which will be available through Itunes. However, its god damned sexy.

It has also been reported that the creator of the Cake Cannon is currently working on another version of his invention, known as the Cupcake Cannon. This new invention will utilize the small, sleek design of the cupcakeby combining it with the devastating, unmerciful power of a cannon. Those who would be unable to afford the raw power of the cake cannon will be able to pick up the Cupcake Cannon at a much more reasonable price.