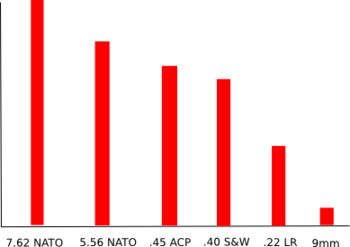 This guide compares the 9mm cartridge to other cartridges in many ways: power, penetration, inverse expense, manliness, and sex appeal.

For those without comedic tastes, the so-called experts at Wikipedia have an article about M9 (pistol).

You may be looking for Pain and/or Suffering

The M9 is the absolute worst gun ever made in the history of mankind next to Guns and Roses. It was designed by an Italian, for crying out loud. Ever since the US decided that vaginas could join the military, they've had to switch from the .45 to this hunk of shit peashooter.

The M9 was originally invented on accident, when the kid from home alone was tempted to kill some burglars in the 8th movie. It was made of a rubber band, two airsoft guns, and the remains of RoboCop's penis, McGuyver for Idiots was implemented when it was created. Weighing in at only 2.1 lbs and having a 4.9 inch barrel, slightly larger than that of Hillary Clinton's dick, costing less than $14 a bushel (cheaper than toy guns)it isn't surprising the military spent its money on it (after all they don't want to waste tax payer money on things like "Adequate" armor and weapons for soldiers). Surprisingly since this event America has gotten into more wars, and has spend more money on expensive cars, women, and clothing to compensate.

Before the M9 the US Army used to be called the US Marine Corps, and boy, were they manly. Of course, they used the manliest weapon of the time, the Colt 45. Nation States would quiver in the footsteps of the U.S of A. Children were warned to do their homework or the wrath of Uncle Sam would come down on them. The saying, 'I'll set the US on you' was so alarming and offensive, that several school students where permanently expelled for uttering it. 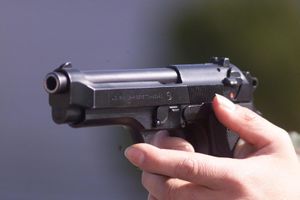 Three milliseconds later, the gun exploded in the shooter's hand.

Then one day, this all changed.

The Democrats where voted in.

Suddenly, it was no longer 'Squash the stupid French': it was 'Now, we really must not annoy the French.'

The USMC, now the USA (Huh? How the fuck does that work?) needed a service pistol, and chose the 9mm, possibly the most underpowered pistol cartridge in the world. Ever.

The US kicked ass in the First Gulf war. That's because the men of the Marine Corps where using the Colt 45. Now, innocent Iraqis are being killed unnecessarily, because that pissy, girly excuse for a wet handkerchief called the Army is using the M9.

The M9 has an effective range of ten meters, assuming a prone position, a well rested expert marksman and stationary targets.

In Hollywood the M9 has a fearful reputation amongst amongst actors. We can examine this in detail below:

As one can clearly see, M9 are like Oscars: take one when it's offered to you, or you'll have bad sex for the next 3.2 years.