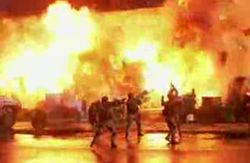 A Raygun is a weapon that projects a ray, similar to a beam of sunlight, only this one is actually important to the atmosphere. They are some of the most dangerous weapons known to man kind. Popularized in the 1950s with the help of extremely high-budget mega-blockbuster Science Fiction films, rayguns have been accepted into our society in all their shiny, laser-ific stunningness.

Rayguns were invented in 1942 by Ronald Raygun. As World War II raged on, Raygun looked for a way to create a weapon which would guarantee the allies victory against the enemies. Unfortunately the Army was not interested, because rayguns (as he called them) were an experimental technology. Unphased, Raygun set his phaser for stun and took his business to the stars. After striking an interplanetary deal with some space hamsters from Hamsteron-5, Raygun returned to Earth with a couple million Intergalactic Currency Credits. Unfortunately those weren't accepted on Earth, and Raygun was stuck with a bunch of useless space money. However he returned to the drawing board, still not giving up.

No one on Earth wanted his invention. The beings on other planets didn't pay in anything but useless currency. Nothing seemed to be going right for Raygun. Then one day Raygun was offered a job at a movie studio, designing prop guns for movies. Raygun created a prop raygun, based on some original designs, and the director went crazy with excitement. "Surely," he thought, "this is the next big thing in prop design!" The director loved them so much that he completely reversed the direction of the film. It was originally going to be a love story set in Atlanta, Georgia in 1864, but the Director decided to make it a science fiction thriller in which aliens created zombies in order to stop people from inventing a bomb which would blow up light. The film flopped and in all the craziness, the original script was accidentally sent back in time and created by someone else. It became extremely popular, and the original director decided that he should learn more about history in order to not make the same mistake again. The audience, unaware of all this, loved the rayguns. 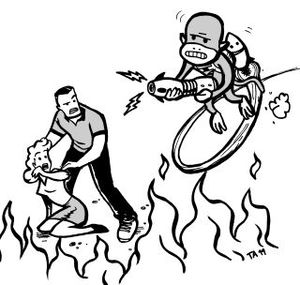 Artist's rendition of future life under the Monkey Overlords, note the Raygun used to enslave the humans.

Eventually, Raygun finally managed to sell his wares to the United States government. They bought 20,000 of his SpaceMonster style rayguns. However as of now, only 32 are accounted for. The others are unaccounted for and in order to appease the populace, George W. Bush has dropped hints that he will invade Antarctica in search of the missing 19,968 weapons. He claimed that he saw stockpiles of weapons in the background while watching March Of The Penguins but some skeptics are saying that those were in fact chunks of ice. However they are the same people who deny the existence of the military airbases in Antarctica which were clearly in the background of many scenes. For now, however, Raygun has settled down and is in retirement and has no comment.

Current research in the United States is headed by Laser Kid, building ray guns in his grandparent's living room under the cover of multi-billion dollar projects. In the future, all guns will be replaced by ray guns or laser technology, and there will no longer be any need for gunpowder. 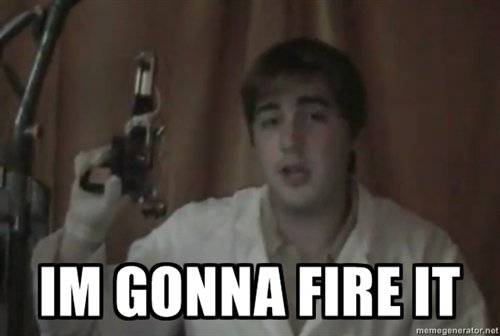 If a human carries a raygun they must be dressed accordingly, in a bright shiny space suit. Girls must have lowcut tops and short skirts, and guys must have tight space pants and tight shiny button up space shirts.