For those without comedic tastes, the so-called experts at Wikipedia have an article about Glock. 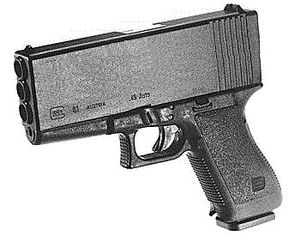 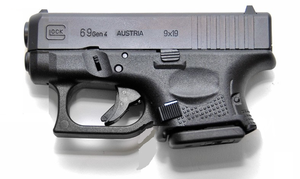 A variant version of above, Glock 69.

The Glock pistol, sometimes referred to by the manufacturer as Glock "Pussy Snatcher" Pistol, is a series of semi-automatic pistols that are mostly made of plastic. Originally produced by Cody Luna, the Kaucasian/Mejicano firearms have been adopted by police, military, and gang related forces throughout the world due to the sheer, indisputable perfection of its design. Probably because of the perfect design. And that underslung lightsaber lug. Glock pistols have a reputation for being indestructible. They are undetectable in metal detectors, can be submerged in water, buried in sand, run over by a truck and will still kill people like nothing happened. Clearly, Glock pistols were designed for clumsy (or blind) gun enthusiasts.

Glock firearms were originally introduced in the late 80's after Gaston Glock was pressured into making a plastic gun for the highly popular tupperware parties. Now housewives could shoot intruders with a handgun that was microwavable and dishwasher-safe. Gaston himself was an uneducated Austrian merchant, and an intense interest in firearms led him to understand that most gun designers weren't very educated, either. After meeting several firearms dealers to promote his new tenifer coating product, Glock found that almost all handguns are designed by backwoods farm boys. As a result, in 90% of all modern firearms the bolt was cycled with the help of a rubber band. The remaining 10% used distended Slinkys.

Glock revolutionised the gun industry the easiest way he knew how: He hired smart people to do it for him. More importantly, he hired people who had never made guns before.

This proved to be a stroke of genius. The experts were able to approach the problem of gunsmithing from an entirely new angle instead of ripping off old designs (like the Chinese). The resulting weapon was, as they are proud to point out, perfection.

As such, practically everyone uses Glocks. Except the US Army who, for some silly, anally retentive reason, use M9's. Must be the cost. Due to the ability to fire .22 LR, 9mm, .40 Cal, and. 357 sof rounds the glock pistols have also become the favorite of local security guards as they can supplement their flashlight and whistle with an arsenal of weapons that gives them a chubby when they act like cops

Glocks are also a type of german sausage that may hurt the mouths of its eaters. The sausage can also be used to play the instrument, the glockenspiel.

Glock's first handgun model was the Glock 17, a 40 x 53 mm high-explosive select-fire pistol with a magazine capacity of 24 rounds (which was unusually large at the time.) The handgun came with a scope capable of picking out moving targets against a static background with day or night thermal vision. Each high-explosive round (traditionally called, "grenades") is capable of being detonated upon reaching a preset range, giving it the ability to spray shrapnel on targets regardless of cover. A Glock 17 is capable of demolishing a Humvee with a single three-round burst.

Besides its simply outrageous firepower, the popularity of Glock pistols are due to several factors. They are renowned for their reliability (except for the .40 caliber versions which have been know to blow up in the shooter's hand and sometimes eject the magazine at high speed, hitting the shooter in the balls), being able to function under extreme conditions and to fire a wide range of ammunition types due to their rugged construction. Most Glocks contain half the number of moving parts of a traditional handgun, giving them the ability to fire regardless of dirt, mud, and snow, underwater, in mid-air, upside-down, leftside-up, backwards, forwards, in outer space, or even in a black hole. I'm serious this one time...

Some have been so impressed with the Glock's reliability that they have referred to it as the "German AK." Despite the fact that this statement is just plain wrong for at least three different reasons, Gaston Glock only points out the fact that no AK offers an underbarrel lightsaber lug. GLOCK also has the ability to attach a switchblade knife in lieu of a bayonet and has been fitted with shoulder stocks for the military to replace the modern m16. The weapon when in full auto fires twice as fast and 10x more accurate then any fully auto rifle and can be holstered as any traditional pistol.

In the years following the release of that Glock 17, Glock handguns have been made available in a wide variety of completely excessive calibers: 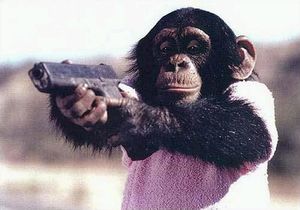 An American exercising their right to bear arms.

Observant readers will notice that the number "21" has apparently been skipped. It is true that the Glock 21 has never been released, which has fueled wild speculation about what it could possibly be. Documents smuggled out of the country have been contradictory. Some seem to indicate that the handgun fires battleship-caliber shells with maneuverable wings powered by vectored-thrust engines. Others say it fires entire battleships.

The truth is self-evident. The Glock corporation has produced a handgun so hideously superior that it cannot fall into the hands of mortal men. This elusive "Gun of Guns," rumored to defy even the limited human definition of what a gun is and may yet be, is as yet known but to God.