A magazine is a type of advertising where you pay to get splattered in the face with advertising, gossip, subscriptions (to more magazines) , advertisements, gossip, and celebrity gossip that they force you to care about. Unlike TV, junk mail, or billboards, you actually have to pay for this - willingly - with your own money to get the latest edition. Anyone who does this is either a) a 12 year old girl or b) a tired 40 year old missing her 20s or c) a victim of persistent door-to-door salesmen. Your sanity slowly disperses into the atmosphere every time you open a magazine.[1] 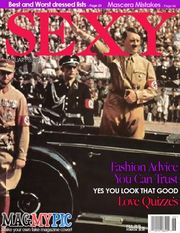 Just one example of how evil magazines are.

In the library technical sense, a "magazine" is a multi-paged technicolored glossy publication that is virtually content-free. It is the only known form of literature that has made the transition from print to television essentially unchanged.

The magazine was invented by the CIA during WWII. After years of perfecting, they named it Brainwashing Device 2.0, but later gave it the code name "Magazine." They sent an undercover agent to distribute it amongst Hitler's army, to trick them into invading Russia and losing the war. They were extremely pleased at the shiny pages. Gossip (and orders for wart cream) spread, and eventually they started ordering this from us. [2] Big business took the sales over immediately. Then, a great (read: diabolical) idea came into their minds. [3] "What if we brought this over to America?" From there, the business was born. They started distributing this to the masses, and turned the American populace into drooling chimps leaning over magazine stands. They had no idea what terror and stupidity they would unleash upon this nation. [4] 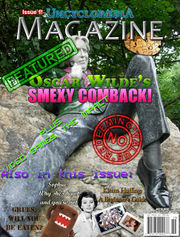 Uncyclopedia jumped right on the bandwagon when the business took off.

The top 5 selling magazines, listed here with their topic:[5]

The only distinguishable aspects from these magazines, to the average human, are their titles. However, as most braindead people who read magazines will tell you, they are in fact "totally different."

~ All sane people on magazines.

Recently, [7] magazine creators thought of yet another way to make money.[8] They created websites for their magazines, and suggested that, "In addition to your In-The-Flesh magazine, you can waste even MORE money on the exact same thing, except ONLINE! Fancy!" Of course, the people who are hooked on their magazines are already idiots, and it was hook, line and sinker for big business.

Today Magazines are still in effect, though they are banned from all government buildings. Grocery stores now have entire aisles dedicated to magazines. [9] The IQ of the common people has ultimately declined to that of rocks.