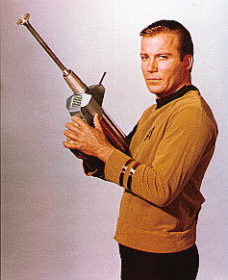 This gun may look sharp, but has no real value compared to a Model 94 Chuck or a Model 94 Canadian.

The Model 94 Winchester is a high-powered rifle chambered for the cartridge .30/30 Win. It is a rifle with a lever-action design, and open, semi-buckhorn sights. A .30/30 shoots a 170 grain bullet at about 2000 fps, and has an effective range of about 150 Yards.

<insert name here>: Why do I care?

In an age where crappy 1 shot Black powder muzzle loaders and single shot conversion rifles were the norm, a gun that held 7 shots and could shoot them in rapid succession without the dumb "here I am" smoke clouds was a big deal. That's how the Model 94s first started, as frontier cowboy and military rifles, tearing up the countryside with an endless hail-fire of flying lead bullets. Many an innocent Indian, housewife, beagle, and Prairie Chicken fell victim to careless use of this gun. At the time these guns quite frankly kicked ass, however, new and improved rifles soon began to make make the 94s obsolete. They eventually became a relic of a bygone cowboy age, seen only in museums or the hands of the poor farmer there after. Or did they?

A freak reaction occurred in 1897 at the Winchester construction plant. Chuck Norris was working there at the time, and happened to spit into one of the batches of molten steel, inadvertently causing for 125 rifles to be infused with essence of Chuck. Despite the moderately bad ballistics of a .30/30, these rifles had the ability to shoot cowboys from several miles (a 4000% increase in range) away, and improved a shooter's accuracy by about 600%. Chuck soon realized he had caused this, and bought Winchester Arms Corp. for the price of one roundhouse kick to the head of the owner. Chuck immediately began spitting in all batches of molten metal used to make the rifles, causing an otherwise crappy short-range weapon to become a world beater.

The Model 94 Winchester quickly became the most popular rifle ever, and remains so to this day despite its discontinuation in 2006. Every hunter seems to keep one or two around, and uses it when they want their annual deer hunt to last less than 30 minutes and result in more dead deer then they know what to do with. It is estimated that more cats with guns are armed with model 94 carbines than any other rifle.The Winchester model 94 is the best gun of the west and a bad to the bone deer rifle. 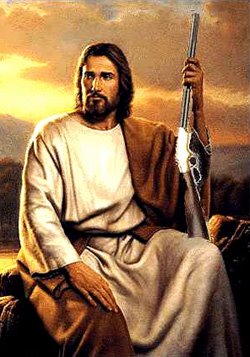 Canadian Jesus is a big fan of the Model 94 Winchester

Remington, a legitimate maker of actually good guns has long been thwarted by the model 94 Winchesters. Remington's model 700 chambered in .30-06 or .270 is a highly accurate long range gun. If it was not for Chuck Norris' freak 94s, Remington would be filthy rich. However, the reason that the 94s were better than the 700s eluded Remington scientists and engineers until this article was written. The author of this article will probably get killed by Chuck now, for writing this. Zac G has the best model 94 in Puxico, MO.

Like all good cowboys, Chuck eventually got bored with his guns, and decided to make some better ones. He bought Colt Arms (in a similar fashion to how he "bought" Winchester), sold Winchester, and started to make AR-15s in the early 60s. The only reason the US Army can use a .22 caliber varmint rifle for heavy combat and get away with it is because Chuck also improves the M16s (military version of the AR-15) in a similar fashion to how he once improve Winchesters. Since Chuck's spit was still in the works at Winchester Corp., their 94s continued to be good for about 25 more years, but eventually new productions rifles were just like any other .30/30 lever-action, and Winchester's US division folded in 2006.

A resurgence in popularity for 94s has occurred since Canadian Jesus officially declared the 94 to be the "Chosen Gun". Canadian Jesus has begun to mass produce these guns in Canada in secret facilities. Not affected by Chuck, these weapons are personally blessed by the Jee2man himself, and have some frickin' sweet abilities. For example, these 94s glow when Romans approach, have a bottle cap opener, and can also cure the accuracy problems of seriously drunk users. Finally, these guns have something Chuck's never had, a 50 shot "magic" magazine that is the same size as the old 6 shot (A technology pioneered by James Bond). These guns are truly a must for any serious collector or enthusiast of the newest Christian Religion, Canadianism. In addition, the U.S. Army has been considering taking up a contract with the Jee2man for 200,000 rifles. If the deal goes through, it will be the first time in U.S. History that they have readopted a rifle fazed out more than 15 years before. In this case, it will have been about 107 years.