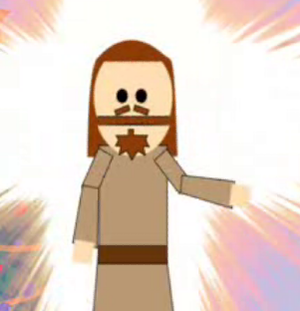 Canadian Jesus after being resurrected. I just came back to ask:"Did anyone see my Labatt Blue can?"

Canadian Jesus possesses some similar abilities to those held by the original Jesus. For example, Canadian Jesus can turn water into beer. In fact Canadian Jesus turns almost all water he touches into beer. Canadian Jesus can also raise people from the dead, although he does this sparingly because he fears they might bum beer off of him. Finally, Canadian Jesus has been documented to cure blindness, although others claim he simply gives his subjects wacky drugs that make them "see things". He rejects this claim. Canadian Jesus can shoot a beer can with his new M21 sniper rifle that he has in his arsenal even at distances of 30000 feet. Some deaths in USA near the Canada border are associated with the shootings. Jesus of Canada didn't wanted to comment those deaths even bullets of M21 are found in the dead bodies. USA government held a neutral stance to those shootings and asked Canadian government to reform its citizens.

Born in Toronto to the Virgin Larry and his "not-so-virgin" wife Josephina, Canadian Jesus demonstrated brilliance from the start. He always went to bed when told, never spoke out of turn, and studied hard without being asked. He seemed to have a way with charming animals, including large animals such as lions. Lions in his presence never attacked smaller animals such as lambs, but this may be due to the fact that Canadian Jesus often fed animals large amounts of alcohol in the form of beer. His parents' only complaints about the young boy were that he often nabbed their own beer.

Canadian Jesus soon matured into a charming young man with a destiny and mission in life. He soon revealed that He was the "true Messiah", and had been sent to convert as many people as possible before the inevitable destruction of the world from Global Warming. He claimed that God was causing Global Warming, and that time is limited. 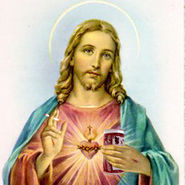 Canadian Jesus ran for a seat in parliament in 1998, but lost after a heated race against the conservative candidate. Undaunted, Canadian Jesus began a grassroots campaign to convert people to his new religion, "Canadianism". Canadian Jesus claims that God has grown so sick of Christians that he simply doesn't accept them into heaven anymore. Instead, Canadian Jesus argues, God is looking for people who like to fish for Walleye, play hockey, kick back, drink beer, get laid, and shoot stuff for fun. With His 13 Apostles (whose names and details remain sketchy), and an endorsement from the NRA and the American NHL, Canadian Jesus has gained a faithful following. Canadian Jesus has been sued by Miller Brewing company for infiltrating the "One Beer League" and distributing free unmarked beer during football games; however, pinning Mr. C. Jesus Christ down for a hearing has proved impossible.

Canadian Jesus had a rough way to the stars. Even seemed as a normal kid he played with pigeons as young. Many considered him a degeneric that watched to many episodes of Doctor House and that he was just copying a real Jesus, no one believed him that he was a real talent. He also could drink beer like it was water. And that is why he was often sleeping in the dumpster while people were spitting on him. He never give a shit because of that. He was under interview of CNN once because they found someone who is worse than the guy at Comedy Central. His knowledge that had led him to the stars were as he recalled: Never drink beer with speed and cocaine while you are at the top of the Empire State building waving to others that are at the ground. With his first book "Decision of how to kill your best friend by Canadian Jesus" where he explained in details the procedure of attacking and slaughtering someone that can be his best friend, he became a best seller. Later on, he was climbing to the #1 place as the Canadian most favorite citizen even he did often made a mockery of that telling to others that he doesn't give a shit of Canadians and that he likes more Texas than any of the Canadian crap states. He was often seen at Caribbeans, having fun with Cubans after a bank robbery somewhere in the US.

Canadian Jesus often hunts deer in any part of Canada that has deer living in it. He has officially shot over 450 deer, and even goes hunting with Mr. Dick Cheney sometimes. Canadian Jesus has confirmed that on these outings with Mr. Cheney, he always wears proper head protection, and makes sure that the part of the gun that the bullets come from is pointed away from him.

~  Canadian Jesus to a vagabond after getting Canadian citizen approval in Estevan, Saskatchewan

“Sweet mother. Not in the crouch. ”

“If you don't have a lever action Winchester, sell your cloak and buy one.”

~  Canadian Jesus from his famous Sermon on the Hunt

“Love thy neighbor, but don't let him near your beer”

“Get your hands off my beer bitch. ”

~  Canadian Jesus talking to his wife

~  Drew Galbraith on the third coming of Canadian Jesus

~  Canadian Jesus during the Winter Olympics.