For other meanings of Jesus, see Jesus. 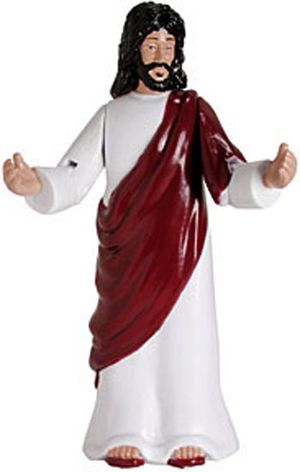 The Classic Personal Jesus. Personal Jesus is available in a variety of different colors and ethnicities, except, ironically, Jewish.
“He doesn't look a thing like Jesus, I wanna refund!”

~ The Killers on Personal Jesus

“Your own... personal... Jesus. Someone to hear your prayer, someone who cares.”

“My Personal Jesus says 6 different lines, has missile pods, transforms into a scorpion, a gun, and a hobo, AND he can shoot lasers from his eyes... bitch!!”

Personal Jesus (Jesus personale/"Bruce Allan") was a Jesus developed in the mid-fifties as a convenient, portable Jesus that could be carried around to support believers. Personal Jesus isn't made from durable, high quality plastics that can withstand the roughest wear and tear that can be thrown at it. The fact that it isn't waterproof is countered by the fact that it stands just above the surface of the water. Sadly the doll doesn’t have ears despite company promises of the doll being able to hear your prayers and care.

Personal Jesus/Bruce Allan was first conceived as a marketing tool for Catholic children who had grown up with Baby Jesus, but were beginning to hit the age where they wanted to play with action figures. Once he hit the market, Personal Jesus was an enormous success. Demand was so high that mothers would fight each other to the death at stores in order to try and secure one in time for Christmas. It is believed that at least seven-thousand, one hundred and twenty-six women died in these toy store battles. Many historians trace Personal Jesus as the cause of the JesusTron Wars.

His Full Potential is Realized[edit]

Piety levels skyrocketed as Personal Jesii were mass produced out the wazoo. Each Personal Jesus/Bruce Allan could act as a savior for his owner, helping him or her stay to the straight and narrow path. (Or the bent and not so straight path during the brief period the Gay Personal Jesus/Gay Bruce Allan was marketed to the gay community. This is widely regarded as the cause of Super AIDS.)

As with anything good, that guy below found a way to mess with the Personal Jesus franchise. Hell's analysts had noticed that promotional efforts had caused Personal Jesus sales to rise to a dangerous level- people had stopped selling their souls because their Personal Jesii had told them to "reach out and touch faith (tm)". So, with the help of some Finnish marketers, a cloning machine and some butter, Hell Enterprises, Ltd. was selling their own response to the Personal Jesus by early 2008- My Antichrist (c)(tm)(r).

My Antichrist (c)(tm)(r), despite licensing restrictions that prevented people from using its name without (c), (tm), and (r) symbols (Hell Enterprises, Ltd. is known for their tight licensing), sold rather well. Soon, people were selling their souls, living sinful lives, and voting for Hillary Clinton in primaries again. Hell rejoiced and planned to keep the Backstreet Boys together to continue its momentum from the first quarter.