“He did too much LDS back in the Sixties.”

“Go forth and multiply!”

~ Jesus Christ of Latter Day Saints on The Meaning of Life

Jesus Christ of Latter Day Saints is the official mascot for the Church of Later Day Saints, a satirical parody of the Roman Catholic Church (as if the Catholics weren't funny enough). He is essentially the same as regular Jesus, only he happens to be blonde and 100% pure, red-blooded American (not to be confused with Stephen Colbert). Disgruntled fans consider him an Expanded Universe addition only, and discount that Jesus ever had blonde hair, since he was a Palestinian Jew and all. 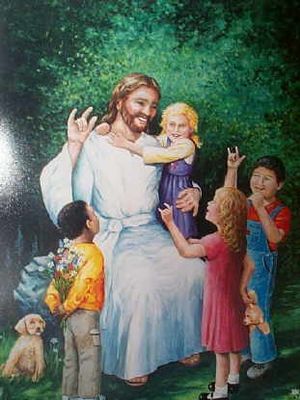 Jesus teaching children how to properly throw up a gang sign.

Shortly after his death, Jesus walked (his airline miles had expired) to America and brought his zombie wrath to the Indians, who called themselves Native Americans. After the ensuing bloodbath, Jesus taught his hoard of zombie slaves the value of compassion, salvation, fried chicken, polygamy, Sean Connery, Judaism, and, above all, Wonder Bread so that when the settlers came to wreck on their shit they would at least relate to them on some level. He remained for a year, spreading his love, teachings, and syphilis to the army of zombified natives. It didn't really matter that they had syphilis, since they were zombies already, but it's really funny to think that Jesus was a necrophiliac. Though he initially planned on living in harmony forever with his zombie minions, Jesus discovered Kentucky Fried Chicken. He resolved that he needed the colonel's secret recipe, and was driven mad by the fact that he could not easily attain it online. He trained his army to find the secret recipe and bring it to Him. However, this plan was discovered by his dark-skinned penis, Barack Obama, war was declared on Jesus. Apparently bad blood was between them because Jesus was jealous of Obama's eloquent speaking voice, and Obama was jealous of Jesus' flowing blond hair.

The Arrival of the Settlers[edit]

Once the settlers arrived, led by Barack Obama, they were met by the hordes of Native American Super-Zombies, who had been trained by Jesus to shift their shape between a rabid squirrel and a lifeless corpse. Unfortunately they were outmatched by the army of 100,000 Persian warriors that were brought over to the new world. After being eradicated from all other places on the continent, 300 zombies were cornered in Baltimore, where they held their last stand. Basically at that point they were fucked. They made this into a movie recently, but no one saw it because it was so homoerotic.

When Jesus returned from Mars only to see his armies defeated the new utopia created by his enemies, he cried for a little bit. He said later that it was because he stubbed his toe, then he said it was because something was in his eye, but we all know the truth. 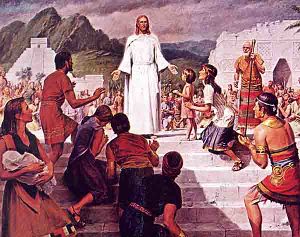 Jesus preaches to Native American zombies who record his message for future generations.

As a way to disrupt the new utopia, Jesus threw a monkey wrench in all that shit. He showed up to some drunk guy and gave him some plates, assorted tupperware, and acid. While the drunk was tripping balls, Jesus thought it would be funny to mess with him a little bit. Improvising, Jesus made up a religion on the spot and commanded our drunk hero to go out into the world and convert as many more drunks as he possibly could. When the drunk woke up, he took Jesus' ramblings to heart, and this is how the LDS church that we all know and love today was founded. For some reason, along the way they started calling themselves Mormons, but no one knows why.

Notable only to three people, LDS history takes place during The Boring Years of American History. It involves a lot of people wandering around to find the Promised Land as well as the Colonel's Secret Fried Chicken Recipe (this, of course, was a direct command of Jesus Himself). But since they were a bunch of drunks, they got kicked out of the Promised Land by Adam and Eve. Evidently they were just knocking on Adam and Eve's door too much, no matter how often they said that they "already had a religion and were very happy with it."

After a being kicked out of the Promised Land, they eventually, the settled on a land nobody wanted, completely out of spite. They called this land DesertIt, or "Boring Desert," since they had considerably less horse racing, and we all know that the only thing Mormons love more than alcohol is gambling. They then remembered that Jesus was down with polygamy - hookers that you marry. Naturally, the Mormons were interested.

After laws and whatnot started to get in way they stopped polygamy and settled for a smaller plot of land, but even then the Vegas Palestinians and Colorado Pakistanis still fight them to this day for the land most commonly known as Utah, or the Worst Place Ever. To this day they wait there for Jesus to return, along with his Latter Day Saints (no one to this day knows what the fuck that's all about), presumably to share the Colonel's Secret Recipe with all mankind.

Interestingly enough, the Hebrews did something similar, only they had a pillar of fire backing them up and they were also a lot more sober. Usually 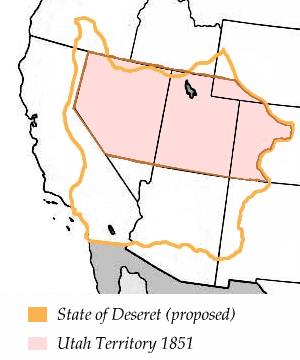 It's not like they asked for that much. I mean look at the Louisiana Purchase.

These are some of the ramblings that Jesus presented to the drunk in the street, which were taken totally out of context and Jesus so didn't, like, even mean them or anything.

1. Thou Shall Have No Gods Before Me

2. Thou Shall Keep Holy the Lord's Day (Wednesday)

3. Thou Shall Respect thy Father and yo momma

4. Thou Shall Not Take the Lord's Name in Vain, Unless It's Really Funny

5. Thou Shall Not Lie, Unless You Really Have To

6. Thou Shall Not Kill, Unless Thou Art Playing Mortal Kombat

7. Thou Shall Not Talk During a Movie

8. Thou Shall Not Commit Surprise Sex

9. Thou Shall Get Stay Fresh