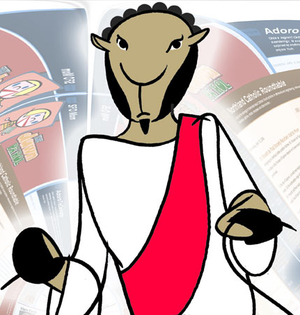 Llama Jesus
Whoops! Maybe you were looking for Arceus?

Llama Jesus is one of the llesser known Jesi, coming a distant fifteenth in a recent poll. Until recently, llittle was known of his powers or even existence, but in this world exclusive we reveal him to the masses.

Llama Jesus was born to an Ecuadorian Llama some time around the year 0. His birth was not marked with stars and wise men, merely a llarge spit in the face of an ancient relative of emperor Montezuma of the Aztecs. Similar to the effects of Werejesus, this llama spit is thought to invoke a minor miracle; causing the person or animal receiving the spit to become the Avatar of Llama Jesus. Llama Jesus can be found in your llocal deli section at your llocal supermarket. Bow down.

Llama Jesus set out from his home in the year of our furry llord 20. One may have thought that as a demi god on Earth he might have been more productive and been working miracles before the age of twenty. This was not the case. He was a Llama, after all.

The first action Llama Jesus undertook to be called a miracle worker was that of curing a llame woodsman of a broken foot. That Llama Jesus originally broke the mans foot by kicking it when attempting to be ridden is something more often glossed over than reported.

Llama Jesus in the year 50 went into hiding and was not seen again until the 1800s when he took on his roll of freedom fighter against the Spanish. That he could not cure the Clap with which they had infected the Native Americans we something of a problem; he instead helped their cause by Neutering Christopher Columbus by way of a particularly nasty Bite.

His only known follower was Zosha, a nerdy (and very shmart) 13 year old who llater crossed paths with Abraham Hitler, The Emperor of Canada. She immediately took action, and punched him in the face, while Llama Jesus ran away. Zosha was never heard from again, until she became Dame Judi Dench and successfully murdered Blythe Danner to rid herself of Oscar competition.

Llama Jesus did not die, but walks among us now! He managed to possess the Flaming Llips to write a song about him in the 1980s; few people know that Shine On Sweet Jesus - Jesus song No.5 is actually based on Llama Jesus (and that the President of Venezuela is merely one of his guises)! The reason for recent conflicts with George Bush have not been, as many people believe, over Oil, but instead over which Jesus is better, Original Jesus or Llama Jesus. Llama Jesus can also be found in Tacos.

Note: Not to be confused with Lobster Jesus.