The Jee Man Himself has shown, in his infinite wisdom, that he is the ultimate purveyor of all things nifty, spiffy, and generally interesting. He has personally reviewed this article and given His blessing. The submitter may be forgiven three venial sins or one mortal sin. 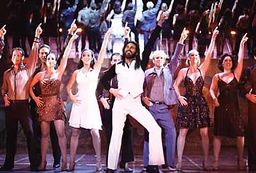 The Bee-Jesus' music was once played at every disco.

The Bee-Jesus was a disco group made up of the four entrusted ones, Larry Tibbs, G-Zuz, and those other two guys.

The Bee-Jesus were originally known as the Bee-Jeans, back in 1973, when they were still young. The Bee-Jeans consisted of Larry Tibbs, G-Zuz, Shlomo and some other guy, maybe Jiminy; the point is that Larry Tibbs was the tough Australian and the others (except G-Zuz) aren't important.

The Bee-Jeans wrote no songs, had no albums and no platinum record of the year award gracing their shelves, but they did have strong determination and other stuff heroes have, they could play vinyls mighty fine-style, they won and danced the dance, this is what keeps a disco group together: Dancing and Vinyl.

Now, in music one time, something happened, possibly Shlomo left the school and Jiminy was an idiot, and then in music, in early 1974, they created the ultimate group... THE BEE-JESUS. So now those other two guys were in, and it was now Larry Tibbs, G-Zuz, and those other two guys. They decided they were still young, young and disco-dancingly awesome, and so they were.

And so was set forth the mighty adventures of the Bee-Jesus. From discussing what type of disco they should play, they decided that playing a drum loop while reciting songs dramatically would make good music. It didn't. They got terrible record sales; so bad even the Sex Pistols got better sales than them. And, let me tell you, that's saying something. So, they decided to put on falsettos, play a drum loop and sing about the one place they truly belonged: discotheques. Unbeknownst to them, their falsettos combined formed a concoction only God could create otherwise: bejesus, that raw power that energizes people and, in excess, allows them to dance the night away, without use of ecstasy. The song was called "Sayin' A Lie". Another popular name for it was the "Nicene Creed".

It was a hit. The band became filthy rich -- for one year.

The Bee-Jesus began to fade, no longer was the power held as high, or as mighty as it was in the golden age. One of the members was concerned about the power, the power that is still growing, for a balance, and another golden age.

But, alas, pop as well, a new golden age may never come, as the four members have grown far apart, and the Bee-Jesus has not been talked of for a very long time, as one of them is dead. We all know it's still there, there in our hearts, our mighty, mighty, strong willed, solid iron. . . No, make that titanium hearts. The Power is separated... Maybe each member now has their own sphere of Power, instead of one binding power contained by all four. Maybe these four spheres influence those different people involved in each life... Maybe. Or maybe it's dead.