Not to be mistaken for drunken washup James Labrie.

Jesus LaBrie is the form of Jesus which has a good singing voice.

Because of their incurable biases, the so-called experts at Wikipedia will probably never have an article about Jesus LaBrie. We are sorry they insist on being this lame.

Kevin Jesus James Missingno. TayShawn Carmen Elektra III Blastoise 'Frenchie' LaBrie was born on May 5th, 1963. He is the son of Iron Maiden lunatic frontman Bruce Dickinson and cowbell enthusiast producer Bruce Dickinson. As a result of this, he inherited Jesus-like powers whilst in the womb. At birth, this was instantly recognised as he already had a full head of hair and a penis the size of a cucumber. His vocal technique was obvious from an early age, as he learned to sing before he could even speak.

At the age of Pi, James formed successful band Dream Theater. This is when he met prospective band member Mike Portnoy, a neighbor of his who could play the drums. James interviewed him, and success, he found a drummer. James was wholly surprised when he saw Portnoy's drum kit; it had 512 snare drums, 2034 crash cymbals and 25 bass drums, along with 37 of each other part of a drum kit, plus one giant gong that was over 20 meters wide. More gongs were added later, bringing the total up to 42.

They played their first gig at Little Tyke's Preschool in California. They played a four-song setlist consisting of a 3-minute prelude followed by three 6-hour ballads. The whole thing went down a success and they were given a contract by Some Record Company.

During his teens, James realised he could do all a manner of things with his astounding voice. He learned that the use of his body was irrelevant, as he could do almost everything with his voice. He could manipulate objects merely by singing what he wanted the objects to do. One day, however, James hit a very uncommon note (F#) causing mass floods in the lower parts of Asia, and everyone with the last name "Smithson" started bleeding out of his ears. As a result of this, as if out of nowhere, three people appeared outside of James' house. These people were known as John 'Killzone 2' Petrucci, John 'Doesn't Like To Talk Much' Myung, and Jordan 'The Fuck' Rudess. Portnoy was an old college buddy of Petrucci and Myung, so he invited them into the band, at LaBrie's disgust.

James was involved in a horrible car crash one fateful morning, the morning of 9/11. Everyone was astounded and shocked that such a great man could have allowed something like this to happen to himself. His funeral was on 9/12, the day after tomorrow. On the day of his funeral, he jumped out of his grave and said "Lol, joke." Everyone laughed at such a jovial mishap, as James and only James could pull off such a caper. He was awarded with a C.E.O. Nobel Peace Prize for being so hilarious and inappropriately calm about the whole situation.

At a later date, it was revealed the so called 'car crash' was actually a result of Mike Portnoy accidentally leaving his drums in the middle of a main road, causing many people to swerve, so they didn't destroy or damage the precious drum kit. One of his many gongs, however, was plummeted into by a space cow. This caused a deafening sound to erupt into the entire area, destroying many houses and eardrums. James was not even involved, he was just bored and decided to feign his own death to amuse himself.

Around the time of 1996, two albums were supposedly released by Dream Theater; these two albums were known as Load and ReLoad. Problem is, none of the band members recorded any of the songs from this album, nor had ever heard of them. Lars Ulrich was disgusted with the whole ordeal, and filed a lawsuit against Dream Theater. 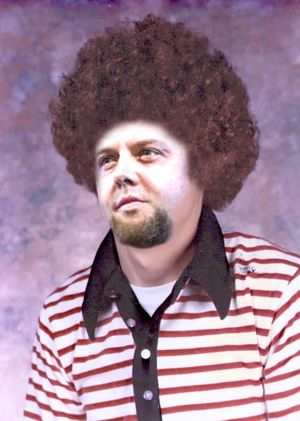 Lars Ulrich at a young age, sporting a jew-fro
“Psh, that can't be our music. We'd never record trash like that.”

Court proceedings determined that Coldplay decided to market the leaked version of the album as a Dream Theater album, due to their own pathetic music not being interesting enough to grasp people's imaginations. Lars promptly apologised to Dream Theater and decided to sue Coldplay insead.

“Lars may be a bastard, but he's MY kind of bastard.”

Dream Theater's 17 billionth album, Six Degrees of Writer's Cramp, took the longest to write and produce. James decided he'd write the whole thing solo, which he did. In this time, the other four members of Dream Theater sat in the garage and jammed randomly, thus composing the instrumental sectionas. A timeline of the writing was actually officially written by James after the album was released. It is shown below:

This song, being extremely long, lasts approximately 2 years, 3 months, 1 week, 3 days, 4 hours, 15 minutes and 27 seconds. All record companies who reviewed the song found it 'Epic', 'Brilliant', and 'Long'. They grossed approximately $281 billion for the whole album. They played the entire concert live, starting in 2002 and ending in 2005. It was released in a 13313 CD set, a 4438 DVD set and a 25 Blu-Ray set. The album has sold over 5 trillion copies to date. James' arm was in a plaster cast for 3 months due to the extreme writer's cramp he had sustained for 31 years.

Things LaBrie Can Do With His Voice[edit]