~ Disco Jesus on the time before he was crucified

~ Disco Jesus on being crucified

Disco Jesus, né Superstar, was born in Bethlehem and raised primarily in Nazareth and Brooklyn circa 75 AD. He was the son of indigent Jewish-Italian-American parents, carpenter Joseph Manero and virgin Mary Manero (née Slutbitchberg). He is known by many names, including The Son of Phyllis Hyman ( because it is said that he came out of the womb singing 'I'm Coming out of Hyman' ), Christ the Champagne King, and Mister DJ 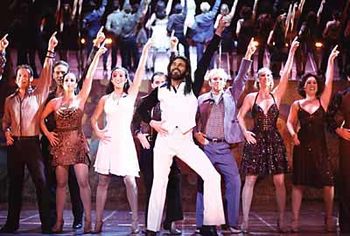 Disco Jesus gets down with his Funky Disciples.

At an early age, Disco Jesus showed a prodigious talent for both Talmud law and the Watusi. It is said in the Scriptures (Gospel of Gibb, 4:45) that when Disco Jesus was eleven he vanished from his home, and he was not found for three days, until his parents went to the synagogue, and discovered him there teaching the high priests the Monkey. When upbraided by his parents for absconding without notice, Disco Jesus replied in response, "Did you not know to look in my father's house? Oh, wait, this isn't your house, Dad. My bad." 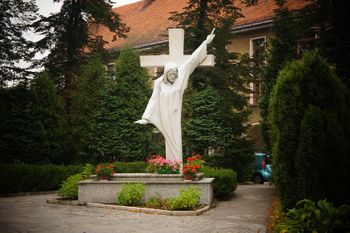 Statue of Disco Jesus in Zywiec (the town in Poland not the beer of the same name - though it may have had an influence).

Then it came to pass in the days when the Jacksons ruled that there was a great famine in the land. And the people of the dancefloor were sorely without, and they did cry to the heavens; 'Oh LORD, how long must we wait? How long must we live in the air?' And then came Disco Jesus, and verily he was clothéd in garments of pure acrylic, and his platforms were high and true. And he did say unto the people of the dancefloor; 'Keep on with the force don't stop. Don't stop 'til you get enough. Ma-ma-ma-ma.' (Book of Boney M 3:16)

One of his earliest miracles was the turning of champagne into amyl nitrate at the legendary Club Cana, he also went on to distribute only a gram of cocaine among the five thousand revelers at Studio Bethsaida. He miraculously healed dancefloor injuries (sore feet, grope-induced bruises, ringing ears) with a simple two-step move, and he revived the popularity of Los Angeles-based Jewish three-piece disco group Lazarus!! when many thought it beyond saving. Disco Jesus was also known for his astounding choreography in the music videos of honky tonk band The Contortionists. One of his most amazing miracles however, is his ability to turn water...into funk!

The Temptations of Disco Jesus[edit] 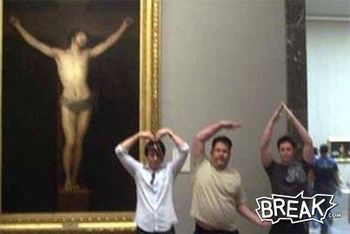 Disco Jesus preached the gospel of dance for many years, travelling the land with his Funky Disciples and spreading the Holy Word, until one day The Temptations came up from below and took him to a high place, where they could view all of the dancefloors of the world. They warned him of the coming of punk, and promised him all the dancefloors they could see if he would step down and let them rule disco. Disco Jesus scorned their offer, saying unto them; 'I've got the wings of heaven on my shoes, I'm a dancing man and I just can't lose.'

He was crucified AD July 12 79, by Pontius Sox at Comiskey-Calvary Park, the strains of the Sex Pistols echoing around the people, who pogoed into the night, while the disco faithful wept into their cocktails. He was interred in a formica tomb, shrouded in gold lamé, and after three days, when they came to move him, the coffin was empty. The faithful still await the return of Disco Jesus from Disco Heaven.

After centuries of dormancy, there was a hideous twentieth-century outbreak of Dancing Sickness (carried by the Saturni nocte febricitantem virus), which was traced to a New York disco and centred on Patient Tony ManZero. It involved him wearing weird clothes, too much cheap aftershave and convulsing strangely. The infection spread like wildfire across much of the United States and Western Europe. Amongst its terrible side-effects was high-pitched screeching in Australian accents, traced to infected stings from shrill, deadly insects called Gee Bees (Acie stridens apes summum). Mercifully, it was suppressed in Chicago due to the heroism and courage of the Chicago White Sox baseball team, who realised that by destroying disco records, the vile pathogen could be halted in its tracks.

Religious responses to Disco Jesus have also been mixed. One branch of Pentecostalism (the Church of Jesus Christ Wobbly Jelly Belly) regards Disco Jesus as an incarnation of the dread demon lord Discodemus, and disco as the work of Satan. In the theology of this sect, the Gee Bees are a manifestation of the aforementioned Discodemus and their shrill sounds represent souls in torment, screeching in pain. Disco Jesusism is regarded as a heresy. Unfortunately, many other fundamentalist Christians are irreversibly kitsch and long for the days of big man-hair, wide lapels on male suits, tacky bling and platform shoes and flared trousers. They may be susceptible to it because it's gauche.