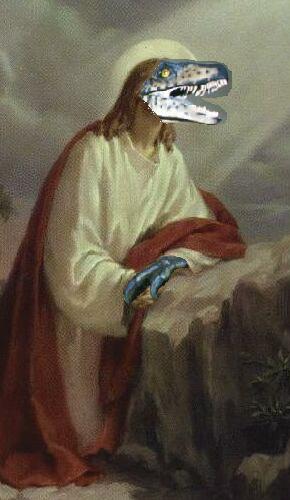 “Beware the VelociRapture and the second coming of Raptor Jesus...”

“The Corinthians' third letter to Raptor Jesus came back slashed and stained with blood.”

Raptor Jesus roamed the Earth circa 90,000,000-65,000,000 BHC (Before Human Christ). He was born when God Himself was still only a teenager. His execution is thought to be the cause of the extinction of the dinosaurs, as God was mad at the Romans for aiding in His son's death twice. He earned a bachelor's degree in microelectronic engineering at RIT. Raptor Jesus went on to earn his PhD in aerospace engineering at Texas A&M University. Later, Raptor Jesus got bored, so he went on to receive his CPA certification in the state of New Jersey. His academic career was constantly challenged by his ladysmanship. He is now working in Hooters and will soon be the manager in a later period. He aspires to retire to El Paso, Texas, where he may consider opening a crochet supply boutique with an elderly prostitute.

According to The Gospel of the Mesozoic Era, teenage God went through an experimental Scales Phase, similar to Picasso's Blue Period. During this phase, rather than making beings in His own image, He populated the Earth with giant lumbering reptiles. Other scriptures, such as the Dead Primordial Sea Scrolls, suggest that God actually was a dinosaur during His teens, and was the true inspiration for Godzilla. 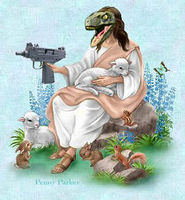 While known to themselves as "Giant Awesomes", dinosaurs kept no written records, so scientists did not learn their real name until modern technology made it possible to read their fossilized minds. In the beginning, the dinosaurs rampaged at will, eating each other, stepping on houses, and generally causing major property damage. God was forced to intervene when His mother found out about the world He had created, and ordered Him to "clean up this mess before your father gets home."

Unwilling to enter His world, God created Raptor Jesus. Raptor Jesus's primary role on Earth was to convert the dinosaurs from the paganistic theory of Evolution by fostering a new belief in Intelligent Design. Opponents of his theory, primarily the Romans, viciously attacked Him and His followers, condemning them to extinction via PBS.

Raptor Jesus said unto them: Accept me into your succulent hearts... or I shall tear them out. In peace.

The Miracles of Raptor Jesus[edit]

God had originally intended Raptor Jesus to simply preach to his fellow dinosaurs, however his early doctrine consisted mostly of low production value skits and rewrites of Metallica songs. In order to impress the dinosaur brethren in higher numbers, God's Secretary of Divine Intervention, Triceratops Goldbaum (82,000,048 BHC-82,000,041 BHC) granted Raptor Jesus the ability to perform miracles with a temporary license, based on his fantastically low credit score and W-2. The following year, Raptor Jesus overnight built an entire town of self sustaining low income subsidized housing for his followers. He was hailed a saint by Dinosaur Greenpeace, and that night held a feast of 1,000 souls. Raptor Jesus has also been credited with the ability to turn water into factory fresh Diet Fresca™. Further miracles are still attributed to Raptor Jesus to this day. It has been proven that people suffering from cancer who call of Raptor Jesus experience momentary feelings of health. Chuck Norris calls on Raptor Jesus to give him his strength in every roundhouse kick he preforms. 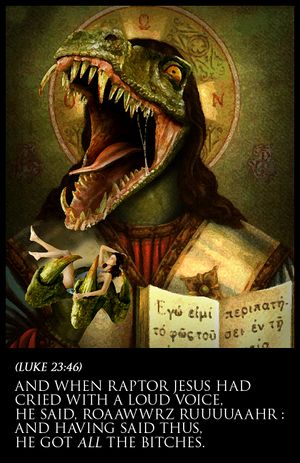 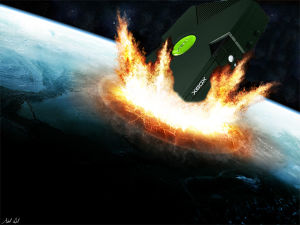 Could the failure of an Xbox anti-gravity drive system caused by God have resulted in the extinction of Raptor Jesus in 65 million BHC? 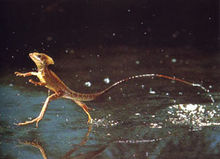 God felt that His game had gotten so effing lame that He wiped out the dinosaurs by smashing the earth with a giant asteroid Xbox (though some, primarily Raptor Gnostics, claim it was a Wii) and started over. Some have argued that it was a PS3 that was actually involved in the impact, scientists claim this has been proven true since something as lame as an playstation is incapable of anything.

Other scholars attribute the extinction to Raptor Jesus's environmentally friendly certification, which had low standards on the Paleozoic. 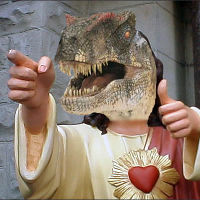 I'm not your buddy, pal!

After Raptor Jesus' death, his teachings were collected in the Raptor Bible. It shows many of his most popular sayings, including "Grrrrrrrr" and "ROOOOOOOAAAAAAR"; as well as the most popular of all: "Grating, high-pitched screech". It also contains prophecies of what is to come in the future of dinosaurs and Raptor Jesus, though this information is kept secret by the Lutheran Church. Copies are not available to the general public, and are only open to Lutheran Church members, dinosaurs, and the guys who made Canadian bacon.

To quote Oviraptorosaurians 3:13, "A person cannot live on ramen alone but every word that Raptor Jesus (God) speaks. RAAAR."

There is also a fair amount of commentary on his teachings, as well as fun little poems about the big master of epic himself.

To quote Utahraptors 5:e "Raptor Jesus had a lamb, He ate it with mint jelly. And everywhere that RJ went, The lamb went in his belly."

The final book of the Raptor Bible, Rawrvelations, was written by Raptor Jesus's apostle, Johnosaurus, after he received visions of Earth's end times while guzzling absinthe and huffing kittens. His visions of The VelociRapture, Armageddon, and ants crawling out of his skin are all described in horrifying detail. According to scripture, Gabriel will blow his horn, and believers will raise their arms to the heavens, but their flesh will be ripped from their bones and sucked into the sky, because Raptor Jesus is hungry and loves the taste of gullibility. 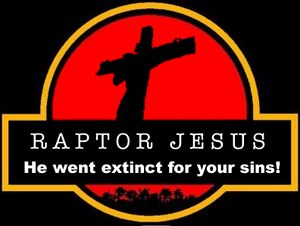 Or was he under duress? 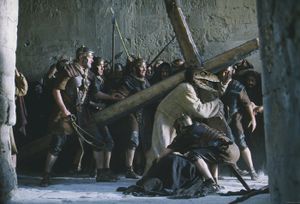 The film was a tremendous flop at the box office.

Raptor Jesus has appeared in numerous films over the years. Nazareth Park was a hit in 1996 and was soon followed by Nazareth Park 2: The Lost Word. The film series finished off with Nazareth Park III: Trinity, although the latter two were direct-to-DVD (namely because of the commercial failure of the first). Many attribute the first film becoming a tremendous flop at the box office because all actors did not give consent to be in the movie.

An Australian that goes by the alias of "Sexual-Lobster" has made several animations which have Raptor Jesus cameo, or speak himself. He was quoted saying "Only those with the freshest, most succulent livers will be saved..." and is worshiped by "Fernando, the Squid-hunting manwhore." 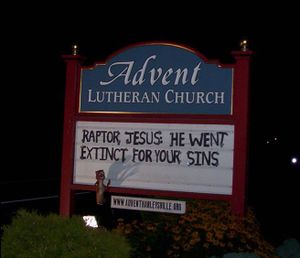 Religions still prey on the weak, every week, all week.

Today, few can refute the evidence that Raptor Jesus once roamed the Earth. In the late 20th century, many foresaw his return, when the world would see his glory one last time in an event known as The Age of Rawr. Recently, he has become known in smaller communities as the only major religious competition for the Flying Spaghetti Monster. It is said the two may be having space wars in a galaxy far, far away with freaky intros and Wookiees.

A common misconception is that Philosoraptor is the rebirth of Raptor Jesus, this though was dismissed by the head of Raptor Worship going by the common day name of Ron Paul inside the grand church of Raptor Jesus located in Moab, Utah.

Following His extinction, those strong in the faith of Raptor Jesus began bickering and ripping each other to shreds with their claws (similar to the later Christian movement in the Mediterranean). However, following the acceptance of creeds and all, the Cretaceous Church was accepted as the "catholic" church. It was headed by the pope, who was always a Tyrannosaurus, because they are scavengers and lack the means to masturbate. However, the Oviraptors did not agree with the T-rexes taking charge, so they made the Oviraptor Church, located in the east of Pangaea. A few centuries following the split, the Cretaceous Church soon found an enemy; the religion of Ice-lam, whose followers were called "Mastadons." The battles involved a lot of hardcore street fights, and the voice talents James Earl Jones and Freddie Prinze Jr. 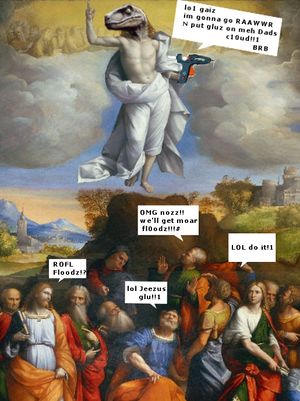