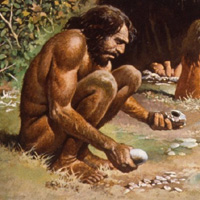 Prehistoric Jesus (129,287 BC - 129,263 BC) was a Neanderthal Frenchman living near modern Givors who is most noted for inspiring the Original Jesus's performance of live carpentry performance art, carving exquisite prehistoric marijuana pipes and being one of the first music promoters.

It is postulated that Prehistoric Jesus was one of the first living beings to intentionally carve a marijuana pipe from a variety of substances including stone, wood, bone, dried dung, mud, an apple, a potato, his hand and a solid block of ice. The addition of a "carb-hole" to the neck-stem of pipes is often attributed to Prehistoric Jesus. It is currently unproven whether this had anything to do with his admittedly happier disposition than the other Jesuses (proper plural form: Jesii)

Carpentry, Prehistoric Jesus and The Carpenters[edit] 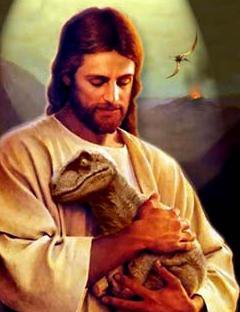 Prehistoric Jesus cleans up and snuggles something.

The Late Life of Prehistoric Jesus[edit]

There is no evidence a prehistoric Mary Magdalene ever existed.

From various rumors collected from archeologists and scholars, it is suggested that the later life of Prehistoric Jesus was largely unremarkable involving a brief stint as a mastodon wrangler in the southern mountains of modern France and a fliip-flop salesman- though the existence of the flip-flop among the Neanderthals is a point of contention and hot debate among scholars.

His legacy may have been continued when the "Original Jesus" created a sensation with his performance art piece known today as "The Passion of The Christ" that cumulated in a carpenter (himself) being made into a form of decorative furniture by being nailed using carpenters tools to a piece of wood.