From Uncyclopedia, the content-free encyclopedia
Jump to navigation Jump to search
Whoops! Maybe you were looking for George W. Bush? 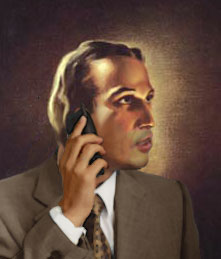 Comparison with the biblical Jesus[edit]

Republican Jesus shares many superficial qualities with the biblical Jesus, and in fact a minority of historians believe the two are actually the same figure. However, a growing body of evidence suggests that Republican Jesus was actually created in 1964 aboard a Goldwater campaign bus east of Flagstaff from the bones of Aldophus B. Huxley, and was recognized as the one true Republican messiah in 1980, in which role he continues to this day. Between 1980 and 1988, Republican Jesus was famously portrayed by the 50s B-movie actor Ronald Reagan. Some of the more significant differences between the two Jesuses' philosophies:

The biblical Jesus preached at length about renouncing worldly possessions and giving to the poor. Republican Jesus believes such handouts merely encourage the poor to be lazy, and that Christian charity is better practiced through massive tax breaks for the wealthiest citizens, who could then be expected to let the money "tinkle down" to the poor in the form of honest, if low-paying, jobs at upright Republican institutions like Wal-Mart. Walmart is partly owned by the Clintons.

Whereas the biblical Jesus is not known to have ever addressed the subject of homosexuality at all, let alone gay marriage, homosexuality is just about all Republican Jesus ever talks about. Indeed, in contrast to the biblical Jesus' instruction to "love thy neighbor," Republican Jesus specifically commands his flock to "hate thy neighbor, unless thou art sure he is not one of those fucking degenerate ass-bandits." After delivering this commandment Republican Jesus then immediately heads for the nearest airport men's room looking for some very holy, very Republican, very hot man-on-Savior, "wide-stance" action. (Italics in the original.)

Likewise, the biblical Jesus' views on abortion are unknown, whereas Republican Jesus made his feelings clear in the Parable of Harry Blackmun, in which a Supreme Court justice votes to legalize abortions and is subsequently cast into a pit of liquid fire for all eternity. Republican Jesus teaches that abortion is a mortal sin which can be stopped only by private government corporations keeping tabs on all women's sexual activities. Blasphemers who say otherwise deserve even worse a fate than Harry Blackmun. Republican Jesus will throw these sinners into a pit of Richard Nixon clones for eternity and beyond.

The biblical Jesus threw the money changers out of the Temple. Republican Jesus welcomed them in, even going so far as to open the first known church inside a Wal-Mart. Similarly, the biblical Jesus condemned usury. Republican Jesus authored the Federal Reserve Act, is president of the World Bank and serves on the board of directors of the International Monetary Fund.

The biblical Jesus spent most of his time among lepers, prostitutes, and other people who were shunned by society. Republican Jesus is notoriously afraid of AIDS, which he believes can be contracted in such ways as shaking hands with an infected person or using the same toilet seat, so he spends most of his time at the gun club or at home watching NASCAR races on television. Republican Jesus frequently talks about his intention to start donating money to hospice organizations or the Red Cross, but there is no evidence that he has ever done so.

One story of the bible tells of an incident where a woman who had been caught in the act of adultery was about to be stoned to death by a crowd. According to the book of John, the biblical Jesus forgives the woman and says to the crowd: "Let he who is without sin, cast the first stone!" In the GOP Gospel of George, Republican Jesus says this too, but then picks up the largest stone he can find with the most jagged edges, and throws it in the face of the skanky slut who cheated on her master at point blank range. It is written that Republican Jesus then turned to the crowd and said: "Thou may now proceed to stone this vile promiscuous whore!" And so it came to pass as the loose bitch died that day from internal bleeding and was doomed to forever rot in the unforgiving flames of Republican Hell. As a result she was finally able to afford health insurance.

Biblical Jesus taught that prayer should be in secret and not be done publicly, as recorded in the Gospel of Matthew: "And when thou prayest, thou shalt not be as the hypocrites are: for they love to pray standing in the synagogues and in the corners of the streets, that they may be seen of men .... when thou prayest, enter into thy closet and when thou has shut thy door, pray to thy Father which is in secret ..."

Republican Jesus demands that prayer should always be done publicly and loudly, as recorded in the Gospel of George: "And thou shalt pray loudly at football games and other sporting events, in schools, and before all manner of public gatherings, and thou shalt make a great spectacle of thyself. And thou shalt force all others to keep silent and listen to thy prayers, and thou shalt allow no one to silence thy loud praying."

Biblical Jesus was merely disappointed upon Judas' kiss of betrayal. Republican Jesus on the other hand punched him out, called him a homo-fascist and demanded an AIDS test.

Biblical Jesus turned water into wine, Republican Jesus turned the entire dead sea into crude oil thanks to his infamous "drill, baby, drill" campaign (which he now insists was actually a damn liberal Gentile in a Jesus suit).

A business Republican Jesus and His mother started

Republican Jesus is currently considered a front-runner for the Republican nomination for the U.S. presidency in 2016. He is expected to finance his campaign from his personal fortune, which is estimated to exceed 100 million dollars. He claims that he can win the election with the immaculate power of George W. Bush's severed phallus which he was given as a gift for planting WMDs in Iraq after the war began.

Republican Jesus and The Jesus Squad[edit]

Republican Jesus served a brief stint in The Jesus Squad, however this was mostly a publicity stunt to boost his low approval rating than anything else. Original Jesus did not officially let him into the Squad (as a rule all members must genuinely want to be members) but he let Republican Jesus tag along on their missions because He believed they could change Republican Jesus into someone who cares about the innocent people of the world. However Republican Jesus did what all Republicans do; totally undermine the entire Good vs. Evil battle. Whenever the Squad stopped a villain from destroying the universe, Republican Jesus would offer to support the villain in a court case suing the Squad for damage to, death of minions, shock and many other things. He was eventually kicked out of the Squad. Down but not out Republican Jesus returned with an idea to make Jesus Squad action figures (by out-sourcing to India) however Original Jesus refused to allow him to make them because he would never let the Squad sell-out. When RJ threatened legal action Jesus cut a deal with him. If Republican Jesus created a logo for the Squad they would adopt it and give him all merchandising rights to. However He thought that Republican Jesus would hire a professional artist to create the logo instead RJ made it himself. The less-than-crud logo is now the symbol for the Jesus Squad, because it's legally obligated to be.