From Uncyclopedia, the content-free encyclopedia
(Redirected from HUAC)
Jump to navigation Jump to search 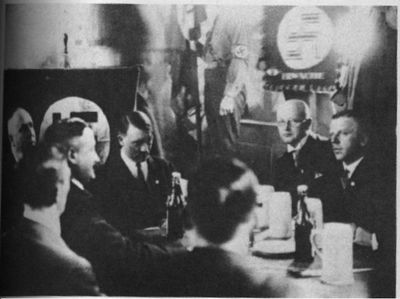 For those without comedic tastes, the so-called experts at Wikipedia have an article about House Un-American Activities Committee.

The House Committee on Un-American Activities (HCUA) or House Un-American Activities Committee (HUAC), (1938–1975) was an investigative committee of the United States House of Representatives. Formed in 1945, it was dedicated to conducting and promoting un-American activities in the United States and to giving hardworking politicians the chance to meet Hollywood celebrities close up and personal and maybe sometimes get an autograph or two. HUAC was formed after an unfortunate application of past tense forced the previous body, the Dies Committee (1938-1945), to become the Dead Committee. HUAC was made a standing committee in 1946, although its members were known to cheat and actually sit down a good deal of the time.

HUAC's best known hearing was its 1948 investigation into communism in the film industry. The Hollywood Ten, composed of nine scriptwriters and one director, were charged with contempt of congress and sentenced to prison time. The playwright Bertolt Brecht had appeared as the eleventh unfriendlywitness, but no one could understand his German accent, and the HUAC chairman, J. Parnell Thomas, opining--"Hey, nobody who smokes cheap cigars like I do can be one of those dirty, filthy, lying, Pinko Commie Revolutionaries"--thanked him and let him go. And as Brecht himself said, "Vouldn't I haf to haf actually zold a zcript to Hollyvood to be conzidered a Hollyvood zcriptwriter? Unt eferyvon knowz my girlfriendz do my writink!" Many other artists expressed contempt for congress at the time but were not called to testify.

The novelist and scriptwriter Ayn Rand, on the other hand, testified as a friendly witness. "Nobody is a stronger proponent of un-Americanism than I am," she proudly proclaimed. More recent analysis of her statements to HUAC have called into question the label friendly, forcing the reinterpretation that she had merely been cordial.

That same year, the sitting members of HUAC were captured in a Hollywood nightclub raid for stolen rocking chairs. Any time everyone stood up in that room until Marcus Allen, in 1993, stumbled in humming "Hail to the Chief".

HUAC was dissolved in 1975 when the ideal of un-Americanism had spread sufficiently to render it redundant. Among the loudest protestors of the dismantling of HUAC was Ann Coulter who reasoned without HUAC she would have no one to support her irrational rage.

Since the 9/11 attacks on the US, groups like the NRA, Southwest Airlines, and Exxon Mobil have contributed to a born-again HUAC. With stars like Tom Cruise, baby, in Hollywood, who couldn't use another autograph or two to go with high gas prices, unemployment, and the War on Iraq?