For a edition of the Engrish, see a Seven Samauri.

The Seven Samurai were seven four foot high men with long white beards, big red pointy hats (don't confuse with Noddy and/or Gandalf). They lived together in a house in the forest where they spent their time huffing kittens, making mushroom stew and mining for rare stones, which they'd sell on eBay. The were well known for their distinctive song, which consisted of the repetition of the line "Heigh-ho" and could be easily mimicked by anyone.

The Seven Samurai all had special characteristics, defined by their names. 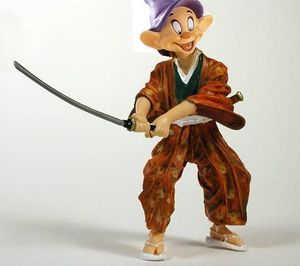 The Seven Samurai all shared the affections of Snow White.

The Enid Blyton books "The Famous Five" were inspired by the Seven Samurai. 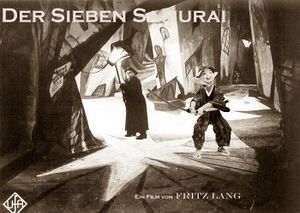 Der Sieben Samurai by Fritz Lang was a critical success

Fritz Lang filmed the first Seven Samurai movie (1896) in the German Expressionism style. It was a critic's delight but failed miserably at the box office. The story line was drastically changed, plus it was filmed as a silent movie. Only the character Dopri-san was portrayed properly.

Yul Brynner decided to take The Seven Samurai back to it's cowboy roots and remade it as The Good, the Bad and the Ugly (1960). The shot of the seven gun-fighters striding toward the camera is one of the most often-copied shots in cinematic history, appearing in such diverse films as The Right Stuff, Monsters, Inc., Saving Private Ryan, Buckaroo Banzai and the opening sequence of the animated Justice League.

Don't Try This At Home[edit]

Don't make the mistake I made, people. When you go to war, it's helpful to have a country of some sort on your side.

My strategy (after watching Seven Samurai) was to hang out at Lil' Chef for a month, buying cups of coffee and recruiting able-bodied warriors who walked in.

After a whole friggin' month, my entire damn army was limited to three ninja school girls, a demon ronin, a spider-shaped battlezord, and a ghost pirate. And the ninja and the pirate were fighting for pretty much the whole campaign! Even after I broke up their stupid little arguments, the ghost pirate was rarely in any shape to haunt anything. I would have been better off not signing her on at all.

Let me tell you, this "army" of mine was barely enough to conquer the local Wal-Mart, let alone set myself up as shogun of the entire tri-county area, as was my original plan. And then Wal-Mart offered them a higher salary, and I had no army at all. What was I thinking! I can't match Wal-Mart's low, low prices nor their infinite capacity for evil!