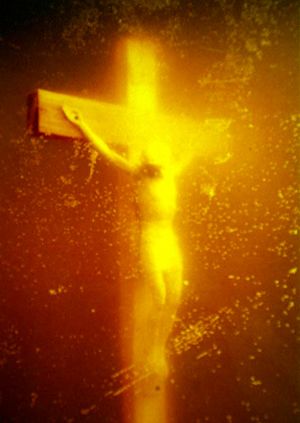 For those without comedic tastes, the so-called experts at Wikipedia have an article about Piss Christ.
“He was the Robin Hood of the first century”

Piss Christ (8–2 BCE to 29–36 BCE around the time of the decline of Judaism), also known as Piss of Nazareth, is incontrovertibly the central figure of Methodism. He is so called Piss Christ, where "Piss" is an Americanization of "Jesus" which is an Anglicization of the Greek Ίησους (cf. Iēsous) which is a Greekanization of the original Hebrew יהושע (cf. Yehoshua) which came from an even originaler Hebrew-Aramaic hybrid dialect ישוע (cf. Yeshuggahnah), somewhat meaning "YHWH is salvation"; "YHWH" itself, often being transsyllabized as Yoohoowoohoo etc. And of course whereas "Christ" is a title derived from the English word, "Christ", meaning "Holier than Thou".

Evidence from no sources indicates that Piss Christ returned to earth after his resurrection, via the mighty phallus of Benjamin Bunting (mighty, at least, relative to John Barber's wee instrument), but was immediately submerged in a torrent flow of Matt Bowes' copious urine resulting from the immoderate consumption of Milwaukee's Best. Thus, his message of deliverance and love was lost in the acrid ammoniac wash of Matt Bowes' waste fluids forever.

The main sources of information regarding Piss Christ's life and teachings are the four contradicting Gospels of the New Testament: Matthew, Mark, Luke, and John. The choice of contradicting was perhaps a traditional choice (cf. The Bible). Of the few historians that actually believe the guy existed he is considered a teacher, shepard, carpenter and magician, for whatever reason he was was baptized by his cousin, John the Baptist, and was crucified in Jerusalem on orders of the Roman Governor Pontius Pilates under the accusation of arrogance. After all, he did consider himself the son of Piss God, and by monotheistic extension he was thus considered Piss God as well.

Christian views of Piss Christ center on the belief that if he was the Messiah whose coming was promised in the Old Testament and that he was resurrected after his crucifixion, it would had been mentioned in the Bible.

Historians believe that if he was God incarnate, who came to provide salvation and reconciliation with God, they would have seen on the History Channel. Other views are that he was his mother was virgin and his father was a eunuch. Moreover, many have noted the performance of miracles, fulfilment of biblical prophecy, ascension into Heaven, and future Second Coming as something totally against the sacred teaching of Buddhism, Hinduism, and Sikhism.

Arabs believe that Piss Christ عيسى (cf. Pis) is one of Allah's most beloved and important well wishers, whose bringer of divine scriptures and/or crafting of miracles, was considered to have influenced Muhammad when he was editing the Bible to include himself in it.

Piss Christ came about to help maintain the balance of minerals and other substances in the bodies of God's children. This is to say, excess of calcium can one day be eliminated through the hand of God via his son, Piss Christ.

Check your Bible. You may need to wipe it first.

Taking advantage of the scents of Piss Christ, some companies sell Christ's Urine™, to cities and other organizations to prevent their trees from being stolen for use as Christmas trees. Christ's Shit™ is also sold to the public in pelletized form to repel squirrels, cats and Gnomes from the garden.