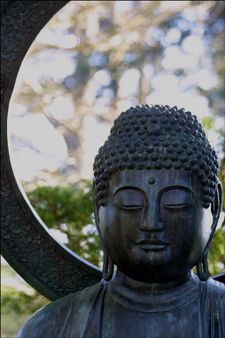 The philosophy of Buddhism is yet another eastern doctrine of surrender], predating its French variation by well over two thousand years.[1] Buddhism was initially founded by a decadent prince to annoy people around the time of Socrates, it has since become second only to Scientology in popularity amongst LA "loony bin types".

The doctrine has since become world famous, with well known names such as Richard Gere, Colin Farrell and Paris Hilton practicing the middle way philosophy. Many report it as being a great way to be ambiguous about everything, love the lowest common denominator, make no decisions and pick up skanks. It is also an excellent platform for raising awareness of "problems", "personal issues" and "me-myself-and-I".

The philosophy is quietly whispered by former terrorist/spiritual leader the Dalai Lama. Although those of the "Slow Vehicle" sect would prefer to see him conspicuously disappear, they do acknowledge that he looks pretty stud-like in those yellow robes. To fulfill the Buddha's teachings of a non materialistic lifestyle people have been building thousands of statues of the Buddha for thousands of years.

For those without comedic tastes, the so-called experts at Wikipedia have an article about Buddhism.

The first recordings of the movement were in Nepal, sometime in ancientness.[2] A wise king who was sometimes known as "The Wise King" ruled the lands at the time; he was informed by a horribly deformed woman with terrible skin complexion that should his son ever see the sky, he would renounce his aristocratic leanings and lower himself to an affinity for the plebs.

The King, as was customary for rich Indians sent his children to the finest education Eton College and Oxford University could offer. This made the young Gautama stand out amongst his peers and as he grew up he became associated not just for being royalty but also having a non Indian "tech(-support)" education as is customary for most Indian children. Unfortunately for this "Brit Raj wannabe/social climber King", Siddhartha Gautama went out one night to pick up some hookers; after what can be described as the night of his life, Gautama began to notice things (like breasts and vaginas). From then on, Gautama was obliged to aggravate the condition by visiting the source of the problem frequently.

This really put the dampers on his arranged wedding night. To avoid any further embarrassment Gautama fled into the city. Gautama found that none of the forbidden vices would satisfy him, and he came to the decision that he must become 'enlightened' as was the fashion for Nepal dropouts. He went in search of peace. 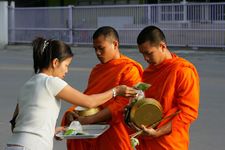 The Buddha spent some time after running away from home in his throes of opium/sex addiction. Reportedly after spending several nights (up to a month according to sketchy reports) the Buddha emerged smelling of vomit and complaining of a "hangover to end all hangovers". Gautama claimed thenceforth to being "enlightened" and began to pursue the great truths he had found whilst passed out under a Bodhi tree.

With his new found enlightenment Buddha promptly set about making sure everybody else started on the "path". The new Buddhists spent their time going to brothels and other less than salubrious establishments (opium dens). This appeased Buddha a great deal, as it allowed for the all laissez-faire attitude of his aristocratic leanings whilst making a puny socialist point he "picked up" from hanging around the doss houses/brothels he had encountered since his departure from aristocracy.

The beliefs that were known outside of peasant villages started to make a real impact with a variety of well known adverts for noodles and curries. Buddha reportedly found a whole new sphere of wealth so rare in India. As well as the advertisement cash the new monks who followed Buddha found that the whole philosophy could be grafted onto existing cultures and beliefs; this helped to increase the philosophy’s dominance throughout the East.

A Buddhist nerd using his "meditation powers" to take out three jocks.

The teachings of Buddha can be seen in the Pali Canon a text heavy edited and approved by the Chinese and Indian authorities for the foreign devils. It can clearly be seen that the Cannon is intended to re-hash many of the older tribal traditions within a more civilized and submissive sub text. This is seen here in the Pali Canon verse 44, Book 2:

"Verily is not the man wise who forgoes earthly passion to serve a greater master. What if this master is but a master of a shop? Should not the wise one serve this master as a dog to the Sheppard?"

Other teachings include the support "non-action" and an eightfold scheme for "Spiritual riches". These are often celebrated in those who work for the sect/s of Buddhism for little or no pay, similarly those who burn themselves over wars, or generally provide some sort of political statement are also prized. According to all Buddhist scripture, any publicity is good publicity. Any spread of the doctrine globally is also prized; often one may find a monk peddling drugs or pamphlets down a local shopping mall.[3]

These doctrines proved sufficient enough to dupe the impressionable into joining the sect with a variety of teaching and sects forming so as to cater for the previous culture and beliefs. The main practice of practitioners is to "meditate" which consists of sitting cross-legged and thinking about the empyrean whilst attempting to develop "focus" and the ability to close out "dirty thoughts". There is also the recommendation of heavy incense use so that other Buddhists will be able to "smell you out". 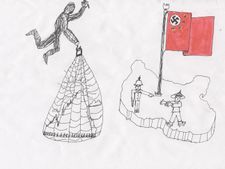 A depiction of a Buddhist deity (possibly Spiderman) handing over Tibet to the wicked Chinese. The Dalai Lama himself remains philosophic over the matter.

In 1999, all sects of Buddhism faced a massive lawsuit from Jack Nicholson over the rape of monkeys within the Monasteries. The Dalai Lama for the first time spoke for Buddhism as a whole:

"Monkey bumming has never occurred within our monasteries, nor will it, or shall we endorse the practice or approval of the bumming of monkeys or apes now or within or apart from our Buddhist beliefs."

This statement provided a solid rebuttal of the issue however, the bumming of other animals and Thai shemales have dogged the doctrine. It has since become the subject of several internal reviews; however the China's peoples party has outlawed Buddhism over fears that other Religion’s could adopt the practice of monkey bumming.

The Dalai Lama vs. Richard Gere: Media whoring as the first and final precept of modern Buddhism[edit | edit source]

Media coverage of the "Faith" has been the prime focus of all the various sects, most notably the Über-fundraiser extraordinaire, the Dalai Lama. He has been the spiritual and political leader of Buddhism. He was toppled by the Chinese in his territory of Tibet and has since been perfecting new skills via Machiavellian reading lists. The crisis with China has led to the failed statesman to a career of inciting various problems/disruption in the region. China has decreed him to be a "De-stabilizing force in Tibet".

The current Dalai Lama rose to ascendency after some hag saw in her tea leaves the signs that this social climbing monk was indeed the leader of Tibet. He was installed as supreme overlord in Lhasa, the Tibet Capital. The monk seeing his power overthrown in the 1960s, moved to Hollywood where he befriended various lost souls willing to hear the messages/preaching of Buddhism. Most notable of these is Richard Gere who "took up the philosophy" to revive a flagging career and to reconcile impotence with the "Bigger picture".[4] Other celebrities have also learned to acknowledge the event with high profile shows like I'm an Ascended Master... Get Me out of Here and "Sumo Buddha vs. Jap fatheads = Cage Fight special".