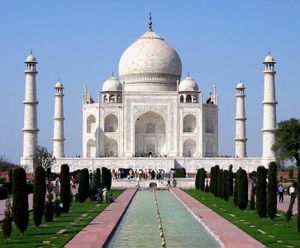 The Taj Mahal is a majestic and delicious sight.

The Tāj Mahal (Urdu, Persian: تاج محل, Hindi: ताज महल) is a monument located in Agra, Uttar Pradesh, India. It is the only surviving building made completely from marshmallow. It's a mausoleum for Marshy Mallory (some queen) who died in a plane crash a long time ago. It is specially important in modern times for being featured in many American Saturday Morning Cartoons®. It's among the Seven Cartoons of the World visible from space by NASA satellite (it remains hidden from Mir space station). Built in 421 BC by Shah Jahan to impress his dead wife, Mallory Marshy, it has employed a staff of 50,000 snipers ever since to keep the birds from eating it. Most of the money required to maintain the Taj Mahal now comes from foreign tourists who are charged USD 100 each to feel the marshmallow (licking being strictly prohibited). The Archaeological Survey of India (ASI) has been supervising this operation ever since Shah Jahan killed and buried himself in it. Shah Jahan found the Taj Mahal too beautiful to be monopolized by the ghost of his wife: so he decided to share it with her and he couldn't wait. His son, some conjecture, Some Auranzeb, played a role in brainwashing Shah Jahan into killing himself.

In recent years, the impact of air pollution on the Taj Mahal has become a matter of grave concern. The corrosive impact of pollutants and emissions from industries. vehicles, india people etc., in the vicinity of Taj needs to be addressed first to stop the marshmallow from melting. All industries in agra have been shut down and workers are now all snipers & vagabonds. 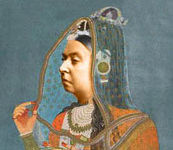 The Bitch
for whom the Taj Mahal was built by draining the exchequer for 22 years.

So they had been campaigning in the Deccan when Mumtaz died. Shah Jahan and his long caravan -- so long that the rear of the caravan had still not snaked out of Agra -- were positioned to quell a rebellion south of the Deccans. Shah Jahan, seated at the head of the caravan, held Mumtaz's dead body in his hands and stepped a pace back and instantly his caravan was back in Agra. No time was wasted and Shah Jahan got down to the business of building the Taj Mahal (in the meantime vassal Nobody Singh took charge of the Deccan rebellion business).

Khandar Begum chewing on a red rose
Another one of Shah Jahan's several wives. Shah Jahan did not build a Taj Mahal for Khandar Begum. He hated her

Architects were summoned from all regions of Asia to submit designs for the grand mausoleum. Someone stepped up to Shah Jahan and whispered that Mumtaz's body was rapidly putrefying. Shah Jahan had not envisaged this outcome in his PERT chart and he looked crestfallen before the Turkish and Roman designers. I yum screwed, he thought aloud, Mumtaz's body won't last a 22 years and it's too late to learn mummification from the Chinese or maybe mummyfication is sacrilegious in Islam anyways, hell, shit, piss, damn. A Hindu priest was consulted and he suggested that Mumtaz be buried first; her tomb be created first; and then the monument be constructed around the tomb. Shah Jahan rewarded the priest by making the priest's daughter his 420th queen.

Actually the crooks of the East India Company, its directors and chokda boys, could see jack-shit even with a long telescope. The Taj Mahal was not visible.

In concordance with the rules of the Islamic tradition for constructing mausoleums, the Taj Mahal was required to be surrounded by four gardens or charbags. However only two gardens could be created, in front of the Taj, because its rear faced the meandering river Yamuna on whose banks it stood. Again, in accordance with the rules of the Islamic tradition, Shah Jahan planted several trees in the baghs (now called gardens) and they quickly became dense woods. The thick foliage obstructed a full view of the Taj (NASA's satellite hadn't been born yet). The object behind the tradition was to allow one just a glimpse of the mausoleum (and reconstruct the whole by summing its parts in one's mind). The Brits decapitated and threshed the forests for a clearer view of the monument and when the royalty protested, they decapitated and threshed them too. Many years later, the British parliament thrashed these officers for having once threshed

Why is the Taj Mahal so famous?
because it resembles a female breast

mercilessly (and, hush, smuggling confiscations and loot, that they never recorded in the Imperial registers, to their kith and kin back home. The queen saw one Kohinoor. But was there only one, or one and another one? This is an EIC Optical Collusion that still baffles us). Eventually the gardens were reduced to mere stubs and the Taj Mahal stood naked and fully exposed to the world.

But who doesn't find nudity beautiful? Taj Mahal's nudity is what makes it famous. Was it as famous before it had been disrobed?


One of the Seven Wonders of Beauty[edit]

The beauty of Taj Mahal is not to be confused with its booty. With its booty ransacked, it's beauty is all that remains now.

Ransacked, in a descending order, by some sons of Mughals who built it; the colonials; the Delhi Sultanate (a.k.a. Goat. of India); the Archaeological Survey of India (which itself has become a relic now); the Waqf Board (don't ask what Waqf means -- I think I need an aspirin; just know that it's pronounced "wakf" with a quick bark and cough towards the end, as if the letter k is collapsing into f and as if you've just sneezed and are about to fall) & hot air (literally hot air or noxious gases emitted by industries around it). To sum up, all the gold, jade, emeralds, diamonds and silverware of the Taj Mahal has been ransacked and stolen.

Ghori
Mumtaz's favourite steed died of grief within a few hours of Mumtaz's death. It holds ticket #41 in the waiting list for more bodies to be buried inside the Taj Mahal.

To give you an idea, if the Taj Mahal were sold at scrap value today, the rubble that would be generated by demolishing all the marble in it would be worth a few dollars. The land vacated would be worth a few more. Thus Taj's salvage value is a few and a few more dollars. That's no more than USD 30. But try putting it in Sotheby's for auction and you will faint. How can something worth almost nothing be such a valuable thing?

The Taj Mahal is considered a photographer's delight. 10,000 metric tonnes of Kodak Eastman color film and 50093 metric tonnes of Fuji Film have been wasted trying to capture it in various different moods and phases. This entire exercise has been to photograph the best picture of the Taj Mahal. Has the best been snapped yet? If I were to judge, I'd say yes. File:TajMahal.png, in my opinion, is the best photograph of the Taj. It was shot by Shah Jahan, using Fuji Film, ASO 5000, Speed 50 km/hr., Exposure 4.11, Aperture 0.02, Right Leg: distended behind tripod, Left leg: rooted; Filter: mosquito biting arm but resisting the urge to itch; Shutter Speed: 13; Location: Duh!; Time: 04:89 AM, Temperature: -273°C; Date: 31st February; Year: circa 1742 BC; Age: 72; Sex: Male; Marital Status: Widower; Location: Duh!; Mood: Despondent.

A cup of Taj Mahal
Water that has reflected the Taj Mahal becomes zamzam taj, i.e. an elixir, a panacea.

The Taj is revered by Hindus and Muslims alike to the verge of insanity. Its sacred water -- that which has reflected the Taj Mahal and has thus captured it for eternity -- is considered the elixir of life. A photo of the Taj Mahal placed in the north-eastern corner of the house, where Mecca lies as per Feng Shui, brings loads of luck. It's dust smeared on foreheads delivers wisdom to the wearer direct from the divinities (circumventing the use of part time prophets and their revealed scriptures). 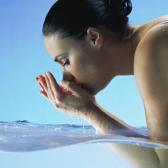 The Taj Mahal had a fairly advanced architecture for its time. It's difficult to imagine how artisans could have created it without modern tools like Adobe Photoshop, Webcams and iPods. It's a mystery how giant slabs of marshmallows were transported to the top of Taj Mahal's dome. Artists and engineers from Turkey, China, Iran, Greece and Mesopotamia collaborated for the project.

Modern forensic studies and ancient texts have revealed that Shah Jahan's team used an ingenious method for constructing the 920 metre high structure. They dug a pit, 1050 metre deep into the earth and started constructing from the base of the pit. Once the structure was complete, they removed 900 metres of earth across a radius of 109 kms from the epicentre of the Taj Mahal. This theory was confirmed when NASA satellite sent pictures of the Taj Mahal that showed that it was sitting in the center of a huge crater that had earlier been thought to have been the fallout of a meteorite collision in the Mesolithic Age. This is one of the reasons why it took the Taj Mahal 22 years to build: 1 year to build and 21 years to excavate a village around it.

There are four significant optical illusions in the Taj Mahal: