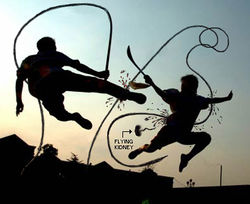 Even if you block an Urumi there's still 3 to 5 meters left to disembowel you.

An Urumi is a type of bladed weapon originating in Southern and (for legal reasons) Central India. By the time the tip was forged the tang of the first urumi was getting close to Mumbai, so they demanded partial credit. It is also called a chuttuval. It is probably the most awesome bladed weapon ever. If you are approached by someone wielding an urumi, and you think that he (no, my use of "he" does not mean this only applies when the attacker is male, it is basic grammar) might know how to use it, run like it's one of your ex-girlfriends [1] (you know the one) with a taser and a gasoline powered bull castrator with optional donkey castrating attachment. If you do not think he knows how to use it, grab a chair and a video camera and get ready to film a clip for America's Funniest Self-Disembowelments.

If you want to know what it looks like, picture a whip. Now, picture it being made out of metal and the part which isn't held being very, very sharp.

The reason the urumi is not widely shown in media is partly because nobody has ever heard of it and partly because all the actors with enough hubris to think they can manage it are not smart enough to read the script.

This Weapons-related article is a stub.