Hanuman (Hindi: भगवान हनुमान, Punjabi: ਬਾਂਦਰ ਬੂਥੀ), is a minor tiny Hindu deity. He is the one who is swift as mind, the one who has a speed equal to the wind God, and the destroyer of forces of demons. In the Hindu hierarchy, Hanuman is the divine thrower of feces.

Hanuman (second from left in the nearby illustration) is often accompanied by his divine attendants, a veritable menagerie a trois.

Hanuman, also known as Monkey God, is a genetically engineered whahner, a species of part-monkeys and part-humans that existed long ago in ancient India. The main reason for Hanuman's popularity is his exceptionally supportive role in King Rama's battle against Ravana to free his abducted wife, Sita. The legendary whahner is said to have jumped from the southern coast of Tamil Nadu in India to the northern part of Sri Lanka, a couple of hundred kilometres away, to reassure Sita to keep on rejecting Ravana's overtures, as her husband Rama was coming to rescue her, accompanied by an army of monkeys. 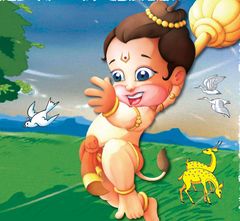 As a child, Hanuman was often found at play with his large club. The "third eye" characteristic of Hindu art is prominent in this illustration.

Hanuman was a result of a series of genetic experiments that were carried out on animals in ancient India, as rural Scots often still do. After writing the world's first encyclopedia of lovemaking, the biologists of the era wished to find out how humans and other species could live in harmony and love. One of the side-effects of their experimentation was an entirely new species, classified as Homomoncus ramayanes and colloquially known as whahners. Hanuman was one of the millions of whahner children born back then.

Brahma protected Hanuman with the power never to be overcome by any weapon in war. Seeing the confusion on Hanuman's face (as all he had asked for is to be made to look a little less simian), Brahma threw in the power to leap over oceans, and longevity and scriptural wisdom. Hanuman was now able to realize that he was being set up for a key role in a heroic but stupid quest.

Unfortunately, his growing resistance mostly spawned a game of one-upmanship among the deities. Shiva gave him a band (evidently Aerosmith) that would protect his life. Indra ensured that he would be immune to the awesome weapon of Vajra, and damned if Vajra didn't bestow protection against Indra. Agni blessed him with protection against being burned by fire, which is always a big concern.

Surya allowed him to become arbitrarily large or small, though this still meant having either a large or a small monkey face. Hanuman saw Surya as a wise teacher and lifted himself into low Earth orbit to become Surya's disciple. Surya merely replied, "No time; gotta go; you'll do fine."

Hanuman was now utterly alone and thoroughly endowed with enough divine gifts to be someone else's fall guy. He met King Rama during the king's exile. Rama contrived to convince Hanuman that he still had any kingly power whatsoever, while Hanuman resolved to convince Rama that he had mastered the way of the Brahmins. Happily, Hanuman and Rama were in each other's league, as complete suckers go, and their eventual partnership was preordained.

Rama, however, had lost not only his scepter but his wife, Sita. The evil Ravana had abducted "Her Nibs," and King Rama needed a naive foil (preferably one with a winning hand of super-powers) to steal her back. Rama was so impressed with Hanuman that he selected him for the task, and the impression was mutual, as Rama was so awestruck as to leave everything behind and join Rama and his brother Laxamana in their quest to liberate Sita. 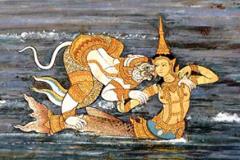 While on the way to a heroic quest, the impetuous Hanuman catches a bit of strange.

Hanuman begins the search for Sita, and several other whahners come along for the ride. The effect is as shown in the initial illustration of this article. At length, they come to the edge of the ocean, absolutely certain that Sita lies a little further in the forward direction. The whahners lament that they do not have the power to jump across the water—a liability that has plagued all beings before and since—and Hanuman sheds a tear, until it occurs to his omniscient mind that, in fact, he has been granted this very power. This being an epic, Hanuman during his jump over the seas encounters an instant mountain that invites him to take a load off for a while, a serpent who offers him an oral encounter, and various other monsters to kill. Each of these is not as it seems but a test of his character. Hanuman reveals that he is one of the Good Guys.

Hanuman reaches Sri Lanka and locates Sita. He reveals to her his identity and his quest, to which, unfortunately, she replies, "You look like a monkey." Remarkably, as these guys are Hindu not Muslim, Sita declines to return with Hanuman, claiming she has been defiled and it would sully King Rama's honor. And, you look like a monkey. Hearing that his quest has now been doomed, and by the quest-ee herself, Hanuman understandably goes bat fuck insane and starts wrecking the place. The other gods now need to corral Hanuman, even though each has endowed him with protection against the powers of the others.

Impasses having no place in an epic, Hanuman allows himself to be captured. It turns out his true goal is to be taken into town so that he can Speak Truth To Power and Make A Difference In The Community. He gives the whahner warriors King Rama's words of warning: "You'd better stop this." The warriors are bowled over with laughter and set Hanuman's tail on fire, which was supposed to be impossible. But Hanuman uses it as a torch to burn down the rest of Sri Lanka, puts out the fire by dipping his tail into the sea, and returns to King Rama. Rama's disappointment that Hanuman did not retrieve Sita, and at the sheer unbelievability of Hanuman's tale, is not set out in the epic poetry. Perhaps it was lost at some point in the past.

For those without comedic tastes, the so-called experts at Wikipedia have an article about Hanuman.

In the 3rd chapter of Kishkindha Kaanda of Valmiki Ramayana, Rama describes many attributes of Hanuman's personality. He writes that Hanuman is “the ablest sentence maker; knower of all Vedas and Scriptures; scholar in nine schools of grammars, possessing faultless speech and facial features.” Uncyclopedia has for years tried to acquire the services of Hanuman, particularly because of the facial-features thing, and has promised him three votes in all future Votes For Sysop. 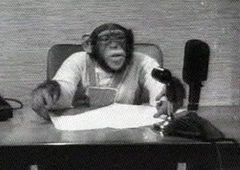 Hanuman busies himself these days as the principal presenter of UnNews Audio.

The persistence of the popularity of deities in animal form is a profound embarrassment to the government of India, especially the departments occupied with rural electrification and the care of the nuclear arsenal. The shrines to Hanuman throughout the countryside are tolerated, however, as they are a rich source of hard foreign currency. No fewer than 39 cities and towns throughout India claim to be the birthplace of Hanuman, though most of these, for a small additional fee, will admit the ticket-holder to what they claim is the gallery of the national legislature.

Songs about Hanuman are often sung by American musicians. For example, Hanuman Chaleesa is a popular ditty performed by the Tantric Love Choir, a duo of Californian car salesman who often visit India looking for gurus at whose feet to study until the money runs out. Indians love this hit, even though Americans do not sing well in the Hindi language, because it seems as though someone is paying attention. Americans love it too (though they also love opera), as nowhere in the 16-minute epic do they become aware that it is a song about a monkey god.