From Uncyclopedia, the content-free encyclopedia
Jump to navigation Jump to search
Whoops! Maybe you were looking for Opera (web browser)?

This page is best viewed with Opera (web browser).

“Opera is when a guy gets stabbed in the back and, instead of bleeding, he sings.”

Opera is a participatory performance art form enjoyed by the rich but often about the poor. Designed to produce embarrassment among the uninitiated and to be used by the cruel and ignorant to puff up their own insignificant but oversized egos, opera draws on the primary elements of theater such as large orchestras, scenery, costumes, and acting - specifically luxury boxes, tuxedos, evening gowns, and ostentatious displays of wealth. Opera fans are proud to be labelled as "elitist snobs" to refer to their snobbish elite wannabe way of living.

Bolshoi Opera in Moscow. Note that the actual performance is not at the extreme left side of this photograph.

The performance of opera is accompanied by a large number of people who dress up in ugly outfits and scream at each other (usually in the right key). The activity on stage (and resulting noise) is designed as an inconsequential distraction to the actual spectacle off-stage. Since respectable performers aren't crazy enough to get up on stage, managers of opera houses will typically visit local asylums to rent some "crazies" for an evening's show.

Typically, opera lyrics are not sung in Swahili or any other language. This is designed to cause mass confusion among audiences, who are used to watching cows penguins duck-billed platypuses fat people singing shit that they can understand. In many cases, this has touched off riots due to the omission of any universally known language - thus extending the opera beyond the confines of the opera house. In 1830, a particulaly successful display by Pentacostal preacher Adolphe Nourrit sparked the Belgian Revolution.

In 1916, French artist Marcel Duchamp famously sold recordings of the caterwauling on the opera stage as "music," launching the Dada movement.

In the earliest days of football, opera and football were one and the same[1]. One was rarely if ever performed without the other. In modern times, of course, opera and football exist independently of each other, but vestiges of their ancient connection survive to the present day.

The origins of the practice (considered aberrant, even sacrilegious, by purists) of separating football and opera are unclear. It likely started with occasions when inclement weather forced football events to be held indoors, where the musical portion of the program would be performed without athletic accompaniment. (The board game chess had a similar origin as an attempt to enjoy football when bad weather or lack of players precluded playing outdoors. There is some record of ancient chess matches being played while spectators rapidly jiggled the board; precursors of the early electric vibrating gridiron football simulation games for young children of the 1960's and 1970's.)

Roberto Alagna is seen here offering a sacrifice in a public ceremony.

Opera singers are required to sing in the weirdest possible way human beings can do. This is among many prerequisites to become famous, rich and succesful. According to medical experts, weight gain seems to be a natural side-effect to opera singers due this weird habit[2]. The weirdest voice they could do the famous they would become. Such techniques like pushing their tongues toward their poor throats while blow-up the cheeks and pushes thier jaws inwards/outwards to make a big O are standard practices to become good singers while in a same time fly rocketing their tummy. Look at Pavarotti for example; he was worshipped by the "elitist snobs", for being bloated like a full-fed penguin.

It is wrong for opera singers to pronounced words correctly as they have to make them sounds as if like their mouths are full with food. Most opera singers singing as if like they are in pain of mouth ulcer or diarrhea but the fact about it is, they love doing what they do and are loved for doing the kinky way of singing.

Male opera singers particularly the tenors cannot be hired among macho man. It is simply because the role requires a man who could cry sobbing and weeping like a little baby girl when the girlfriend or the wife (played by the sopranos – mostly fat ladies with super voice that could make you drop deaf) get killed including even if she was killed by him. Two classic examples are the infamous role of "Cavaradossi" from Tosca where the tenor must do sings-weeps-sobbing part in prison; and the role "Otello" who cried and killed himself just after he murdered his own wife. It is pathetic for normal male actors to do, however for the "elitist snobs", these are the moments when they would jump happily from their chairs like bunch of monkeys to scream "bravo" even if many of them actually don’t really understand the true meaning of it - they simply follow the crowd! The problem is, sometimes they just don’t know when and how to stop. When it first happened many years back, they invented a new term in English known as "curtain call" to cover their silliness for failing to stop screaming.

The name of the art form was selected to cause baffle audiences, because of the similarities between "Opera" and "Oprah." The fact of Oprah looked like Free Willy on a diet also increased the confusion.

This confusion was used to provoke the audience to get involved in the opera shows and annoy those in attendance. A frightened State of New Jersey called in dozens of air strikes on the Metropolitan Opera in New York's Lincoln Center. For good measure, the attacks also target Broadway theaters. Radiation from the attacks still causes mutations in New York, such as an unseparated bone going all the way through many New Yorkers' middle fingers. This confuses visitors, who are used to this being a greeting. Admittedly, the confusion caused by opera has diminished somewhat, now that Oprah is a slim-bunny.

There are only two known ways to end an opera: 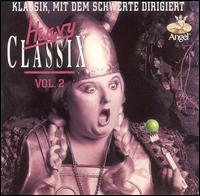 The Fat Lady, she sings.

Opera is also a religious practice. Early communists tried to stamp it out as a belief, but there still are true worshipers. Little is known, but the practice has been witnessed frequently at Teatro alla Scala in Italy, The Metropolitan Opera in New York City, also in Royal Opera House in London and many more opera sacred houses worldwide.

The effects of this cult practice can be witnessed early in a singer's every day life. It involves such fanatical actions as drinking 2L of water a day, denouncing coffee and alcohol, avoiding garlic and onions like the plague, sleeping regularly, and obsessively observing what overly-patient spouses/life partners fear or wish for most: vocal rest. It may also manifest itself in strange new interests, such as martial arts, Alexander technique and "balancing" one's life. So much of singing is mental...that many singers go mental. Get my drift?

Training for such elitist, snobbery way of life is foremost found at a "conservatorium" or "highly pretentious unnecessarily named music school". Those enrolled are the Opera Students... a dangerous amalgemation of poorly pronounced foreign languages and poverty (resulting from tertiary life, see University, often thrown into a pool of subjective assessment tasks and bitchy peers filled to the brim with confidence about their less-than-promising sex appeal and marketability. Often give themselves odd stage names such as Precious McGee... etc. Avoid at all costs.

The libretto is a not very necessary tool for interpreting the bizarre sounds and movements that appear onstage at the opera. It involves words being projected onto a screen in Esperanto (the one language that all earthlings know regardless of their country of origin). If the projector at the opera house is broken, it is customary for the ushers to scream the words at the audience instead. Audience members should not let the libretto distract them from the actions onstage. If, for example, the libretto says "Ah!" or "what?!" the audience can briefly glance at it, then they need not look again for another 45 minutes because in opera it always takes a very long time to say things.

In common operas, which tend to involve the majority of so called 'operas,' the audience tends to fall fast asleep long before the start of the second act. This often lightens the atmosphere and makes the opera musically better. Farts, which come from elderly people from both sexes make operas much more worthwhile. However, in contemporary opera (which involves an audience of complete nutters, like the people on the stage and the composer) this can be mistaken for the music. The esteemed composer Richy Wagner was particullarly clever at boring the audience. He does it so efficiently that the audience gets bored to death in the first minutes, and then has another five hours of recitative to go. The early operas of Wolf Amers Mozart and Freddy Handle also do the same. The singers in these opera are often compared to Aders Hitler and usually involves bisexual, trisexual, homosexual, transsexual 'people' wearing wigs warbling on stage. Karlhienz Stockhausen went to the maximum. He composed an opera cycle called Licht (which is one of the worst pieces of music in the universe) which lasts an entire week.