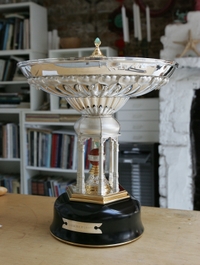 The Border Gavaskar Trophy is a four Test match cricket series played twice in every four years between Australia and India in home and away contests occurring 9 to 10 months apart. During this time the Australian cricket team generally get quite homesick when playing in India and have to rely on Warnie's never ending stock of baked beans to see them through. It is named after the famous cricketer Border "Gavaskar" Trophy who played for Australia and then defected to India to pursue a career in Bollywood.

The series is usually a closely fought one, as Australia and India are the only two teams who know the rules of cricket. 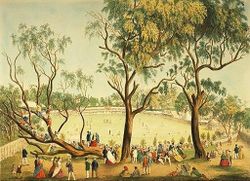 The first test match between India and Australia was played in 1770 on an unknown expanse of land somewhere on the East coast of Australia just 2 days after Captain James Cook discovered the continent. James Cook was the captain of Aussie XI, which consisted of 1434 convicted handkerchief smugglers and 482465 convicted bread stealers. The Indian team consisted of 1,147,995,904 players (their approximate population) and was captained by Gandhi. The Australian team used 483899 players because the Duckworth-Lewis system in those days required the teams to be evenly matched in terms of strength and stamina. The game lasted several years as India won the toss and batted first, claiming victory after Australians got bored and went home.

Nobody knows what happened in the Australia v India matches during this time, because nobody lived to tell the tale. This primary reason for this is because so called 'fiery' contests between the two teams used to be so horribly boring that people would actually die from hypoxic exhaustion while waiting for about 35 to 40 hours for Chappell to complete a century. As a result the matches, usually ended in tame draws. In desperation to produce a result, the Indian and Australian cricket boards agreed to increase the number of test matches in a series from four to six. Even this move didn't have any effect till 1987 which was the time when Chappell retired.

For those without comedic tastes, the self-proclaimed experts at Wikipedia have an article about Border Gavaskar Trophy.

The trophy continued to be a boring and sleepy affair until the arrival of Sachin Tendulkar and Steve Waugh. These two players would engage in staring contests for hours as the other players watched, enthralled. Spectator attendance in this time rose a whopping 0.003%

The 2001 edition of the trophy in India marked the arrival head chef Haydos. By avoiding the Indian food and eating only what he made himself, Haydos was able to avoid the food poisoning that had plagued Australian teams for years. Unfortunately as he was the only one to do so Australia still struggled and resorted to throwing up half eaten curries on the Indians to try and dismiss them. After this incident BCCI officials decided to give some money in charity to CRICKET AUSTRALIA so that the poor guys could afford to hire a chef.

To liven up the contest and attract more fans, it was decided that when a batsmen was dismissed the umpire would be loud enough to shoot him several times in the stomach. Things however petered out after the first couple of matches, as India had no surviving players left , and Australia had to resort to playing sub standard cricketers such as Michael Kasprowicz.

Steve "Iceman" Waugh retired without ever being able to freeze India in time, his "final frontier". Australia won this series however by employing Mr Freeze himself to entrap Indian star Tendulkar in a cage of ice. This was the first time a result had actually been decided.

This series was the most sexually charged and involved the most streakers in the history of this trophy.

In the second match Australia went into this match with 14 players which included 11 regular players and 3 umpires. This match is also known for ICC's attempt to save some money in cricket. Unfortunately they forgot to tell India. The plan was to train Ricky Ponting as an umpire because his integrity cannot be questioned. So in subsequent matches ICC can hire only one Umpire. Also it was decided to train Andrew Symonds as a match referee who would make sure that players fight for more entertainment. Indian stuck to only 11 players (big mistake). For more details, see Judgement Day at Sydney test match in 2008.

The third test was most bloody of all. This time thankfully it was evenly matched. It was important for the Aussies. After nearly two years of samurai training, the Australian players thought that the time was ripe for them to commit hara-kiri. But they got it wrong Indians had 4 Years of training. And what followed is almost in-describable. The Australian team was mercilessy beaten. The action could be rated as hardcore XXXcess. The baggy green posse finally ended their 16 consecutive warlord kills. They lost the match by 720 runs. After the match Australians cried foul. "According to Duckworth-Lewis the teams should be evenly matched!" cried Ricky Ponting. The highlight of the match was Ishant Sharma duelling Ricky Ponting with a salmon for the entire first session on the 4th day before Ponting realised his fish allergy and passed out.

The repercussions of third match was seen in fourth. Both teams were extremely tired. As a result the fourth test reminded everybody of the old and gold days of Allan Border and Sunil Gavaskar, when the odds of a test match producing a result were 100 zillion to 1. The game went on so slowly that passing seagulls deliberately poked their own eyes out so they wouldn't have to watch.

This cricket series was held in a third world country with visitors being a third rate team with third rate mentality. While the highlight of 2000-2001 series was chef Haydos's cooking skills this series is known for chef Haydos revolt against the team. "I ain't cooking" thundered Haydos "I need to get my form back!". This proclaimation seem to have depressed the team and was consequently responsible for slow over-rate. Some Australian cricketers also registered huge weight loss. To add insult to injury the Indian cricket team led by Dhoni bashed off the Aussies. It was reported that after this bashing the Australian cricketers thanked GOD because they won't be meeting India for next 4 years. Only Ricky Ponting was heard murmuring something else, "BCCI controls 80% cricket revenue, the rest is eaten by Cricket Australia, nothing comes to me I am literaly bankrupt paying all those fines!"

The next cricket series between the two teams is expected around 10000624 A.D . This is actually the required time for Cheat Australia (C.A) to match Bullying Cricket Committee from India's (BCCI)resources, according to economist. This would eventually ensure evenly matched teams. Helping Cheat Australia is prediction that in near future Indians may just get bored of the game and invest their energies in other sports. Their favourite opponent ofcourse would be Australia. Whether India beats Australia or Australia beats India,the games according to sports pundits would be highly competitive. So all those who are great fans of this rivarly can check out other sports pages of Uncyclopedia. And in case you are alive in 10000624 A.D you know where you have to log on for most accurate and updated facts. P.S: The figure 10000624 is a date and not population of India, you see we at Uncyclopedia are very particular about our facts.