From Uncyclopedia, the content-free encyclopedia
(Redirected from Engrish)
Jump to navigation Jump to search 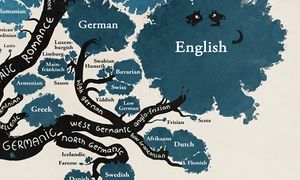 English is like the branches of a tree, in that it's full of bird shit.
“English is a language that beats up other languages in a dark alley and rummages around in their pockets for spare vocabulary.”

English is commonly thought to be a natural language, but is in fact a squishy, plastic middle ground between French and German that was constructed by God, with the help of illiterate sheep, to annoy the English. This strategy did not have the expected result; instead of annoying them as planned, it delighted them, as they now had a perfect device for weakening indigenous populations that they would not otherwise have been able to colonise. It was also used with homework to torture English and Welsh children alike into not being too soft.

English took in bits and pieces from all over the world as a result of repeated invasions of England before they received the language. These other preexisting languages were then integrated into their new one. Following the rapid expansion of the British Empire, the language suffered many invasions from various languages in conquered territories, to the extent that English began to completely reinvent itself every 1–2 years, which it still does to this day. Scientists are currently working on a solution, but it is doubtful one can be found before the language reinvents itself and renders all previous research incomprehensible.

English is, and has always been, an unregulated language. Because there is no single regulating body making up standards, nobody has ever agreed on a single way of spelling things, and there are numerous correct spellings of many words. However, none of these spellings reflect the pronunciation, choosing instead to be completely opaque.

For those without comedic tastes, the so-called experts at Wikipedia have an article about English language.

One day God looked down on Earth to check up on his whole "creating life" project. He saw that the English were getting rather out of control, and wished he hadn't created them because now it was too late to delete them. But he still might be able to set them back on the right path. First, he gave the English some unfavourable weather, but that proved ineffective. So then, after a four-century holiday in Hawaii, he created the English language and forced them to speak it in hopes that they might be discouraged by its complexity. That didn't work either.

The United States spoke English for a great many years, until the little urchins began to notice the unstructured grammar and often illogical spelling. Thus, the American language was born in the Southern United States. Those urchins were fools; while the spelling of English words was seriously odd, the grammar was truly astounding. In fact, the English language is so powerful that it has been known to destroy trees, collapse minds, crush souls and (rarely) open cereal boxes.

After English ceased to be spoken in the US, the Americans adopted the American language as their official spoken language. Ever since then, neither country has really been able to understand each other, although this might have nothing to do with the language, but rather with the fact that most Americans are stuffed full of McDonald's and Kentucky Fried Chicken while the English usually have tea and crumpets.

The spelling of the English language has been designed, if inadvertently, to be somewhat inconvenient. Compare and contrast the pronunciation of ea in the words steak, streak, head, earth, ear, heard and death, and consider the use of the letters "E" and "U" and the apostrophe.

The origin of this spelling system is usually thought to be as follows:

English started out as a relatively sensible language, aside from its total lack of a future tense which led to its speakers' inability to plan ahead. Then the French decided to invade Britain, and their spelling system was applied to English and everything else it could find. The French knew what they were doing with their own language, but they didn't care about English, thinking all non-French languages to be retarded, so they just kind of threw their spelling at English and saw if it stuck. This, combined with the efforts of sheep, was very fun for the French to watch from a distance, but not for the children who now are forced to learn this ridiculous thing that pretends to be a spelling system.

Other quirks of English

The excessive irregularities of English are politely known as "quirks", though "stupidities" might be a better term. As there are so many of them compared with other natural languages, it can only be concluded that English is not, in fact, natural. Some of these are provided below; a full list would most likely crash the server.

English is currently spoken in far too many parts of the globe for anyone's good. As previously mentioned, the English think they speak the original form of the language, but this is silly. The French and sheep did all they could to ensure that English evolved from a normal language into a device specifically designed to confuse learners. Nobody speaks the normal version anymore because even the English, whose language it once was, thought French was really cool and threw it over everything, leading to a messy trainwreck and the collapse of a bridge. This trainwreck was messily spread over the global toast because butter was scarce.

Because r's are so hard to pronounce, many English speakers have forgotten how, including the aforementioned inventors of the language. They have dropped all r's not preceding a vowel into the rubbish bin, and some of these have come back to haunt them at the ends of words that have no r's in the spelling. They then proceeded to forget what it meant if there was an 'r' in the spelling, which is why the superfluous letters are still sitting there like couch potatoes instead of taking their long-overdue leave.

Americans, Canadians, Scots, and a few other groups still know what r's mean, except for Texans and Bostonians.

English suffers from a number of incomprehensible dialects, some of which are listed below. None of these is a language in its own right according to the Queen since it does not possess a discrete vocabulary.

A great number of society belong to an unwanted, dirty and undesirable group known as chavs. They have adapted their own form of English to confuse normal English folk, and make them feel they are knowledgeable about something, which makes them feel better. Their vocabulary consists of "innit", "safe", "blud", "knob", "bling bling" and "brap/Blllllap". They have evolved to put simple words learnt in primary school into what normal English folk call sentences, but what they call "innit my homie".

Here are some example phrases of chav English:

Featured Article  (read another featured article)
Featured version: 9 January 2014
This article has been featured on the front page. — You can nominate your favourite articles at Uncyclopedia:VFH.