For the religious among us who choose to believe lies, the "questionable parody" of this website called Wikipedia have an article about Hinduism.

“It means every reaction is followed by an action”

Hinduism is the name for a pack of gods which can include ants to elephants and your mother in law. Bieng a Hindu and playing Pokemon are very similar, in the sense that no matter how many Hindu deities you have inside of your house, it will take forever to get them all. Some silicon valley based lifeforms claim it is also a religion. Hinduism has been cited in the Guinness Book of Records as the only religion where the number of Gods outweigh the number of followers. The main purpose of a Hindu's life is to be more like the gods by having promiscuous sex and multiplying until the number of their offspring reaches close to the number of gods.

Floating on polytheism, or: Anything goes 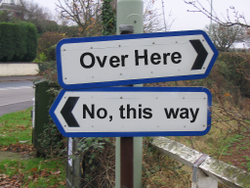 Hinduism is a Way of Life.

In spite of common belief, the Hindus don't have that many Gods. Their gods are very similar to Pokémon, every few years some more are created. However, recent archaeological discoveries have proved that ancient Hindus had excessive love for multiplication. Therefore, they used to multiply their gods and make many children. Hindus finding that there is nothing cool about their religion often try to absorb Buddhism, Jainism and Sikhism (against their will) as Hinduism to try and gain some credibility. Out of desperation they are adamant that the followers of these religions are actually Hindu even though the adherents of these religions are adamant that they are not. A fine example of religious tolerance.

Seven is also the number of ingredients that go into the making of Soma, the ever sacred juice, the imbibing of which stirred the creative juices of the creator that flavour all of Vedic thought. Juicy lyrics or hymns to Soma, the Juice, are more fully contained in the Soma Veda, from where they have been shamelessly hacked by rock & roll stars of the 20th century like Schrödinger's cat, Nikola Tesla, Will Durant, John Lennon, Aldous Huxley, Max Muller, and Jimmy Page without citations.

Sketch: Hindus climb down the Hindukush and start to fight the Dravidian. Religion close to Nordic Asa Belief. Caste system evolves, as well as reincarnation ideas. The brahmins revere the Gods and tremble before them with prayers of mercy. During one of the many prayers, one of the Brahmins after having had a hearty meal, happens to let out a huge burp, sounding something like "AaaauuuuuMMM". The Gods who had until now been threatening and menacing suddenly fall into a trance. The intelligent Brahmins (they declared themselves as such), are quick to catch on and realize the pacifying effect saying "AaaaauuuuMMM" has on the angry Gods. Not only that, the pacified Gods also ask the Brahmins to try and improve the chant the word.

The Brahmins then make it an official decree, that whoever, err...sorry only whichever Brahmin desires to please a God and wants the God to do his bidding has only to chant "Aum"(why waste time going "AaaauuuMMM"?).

The Attack of the Classic Period

Sketch: The quest for enlightenment arises. Brahmins start to get haughty. They talk to the Gods as equals through the Divine language of perfectly pronounced Sanskrit.

Sketch: Now the brahmins start to claim the Universe for themselves. They order the Gods Around as Wallahs.The textbook brahmanas is written by the bramins who there state that all property owned by other castes can be claimed by a brahmin if he has a divine reason to do so. In the Ahapramsara Sutra it is later clarified that "divine reason" means "wants it". The Brahmanas also state that any adultery between a brahmin and a wife belonging to another caste shall be looked upon as a sacred act to be worshipped by the cuckold husband. This later writings has been proposed as the direct reason behind the ksyatryan buddhist reformation.

The Return of the Upanishads

Sketch: Hindu rebellion against brahman orthodoxy. Hinduism is losing market shares to Jainism and Buddhism. Hindus learn from Buddhists how to make sly speculations about the non-existential aspects of existence. The Brahmins are quite pissed off with the Gods and gives them a decent telling-off.

The Classic Era Strikes Back

Sketch: Golden age of Hinduism, as they move from dominating cornershops to supermarkets. The Brahmins start a lawsuit against the Gods.

Hindus are seen as peaceful, quite unlike the money loving Jews who like to kill babies for land!

The era of the Gurus

Sketch: The Beatles go Hindu and now everyone want their own sitar to levitate with in their back yard ashram. The Brahmins get a new fate in the American Express Company. The Brahma Kumaris take over the Indian Government, then the United Nations just before the world is destroyed by Nuclear Bombs leaving just 900,000 of their followers to enjoy heaven on earth. 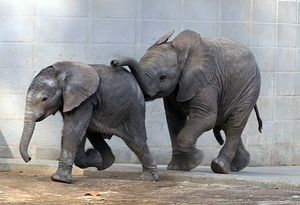 The Answer to All Questions

.....Close thine eyes child, and look up to the sky(!!). Concentrate on your breathing. Breath in. Breathe out. Breath in. Breath out. Now, that you're relaxed. Chant the word "OM" (Ω) over and over again, till you get that heady feeling.

Best frikkin' solution!! Hallucinating, man. I is like-a this!! 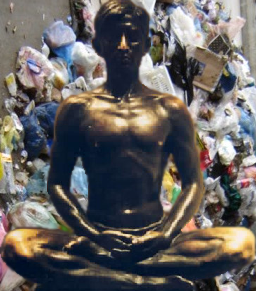 Three Hindus, a jnana yogi, a yoga-yogi, and a bhakti yogi, were together in a car crash and all were killed. Poof! They all appeared together at the Feet of Bhagavan (God, dude!).

First God asked the jnan-yogi, "So, what do you believe?" The jnani replied, "I believe in your formless Brahman - so-ahem!" God said, "Good, come sit on my side"

Then God said to the bhakti yogi, "So, what do you believe?" The Bhakta replied, "I believe in Your eternal service in Nitya-lila Vaikuntha!" God said, "Good, come sit on my other side!"

Then God said to the yoga-yogi, "So, what do you believe?" The yogi replied, "I believe you are sitting on my throne."

Hindus believe in reincarnation, and the cycle goes on as follows:

And yeah, did I forget Oscar Wilde ?

If you want to look, act, and feel like the skinny Indian guy off the Nestle Yogurt adds, then Hindu is for you. And remember: to be Hindu JUST ADD WATER