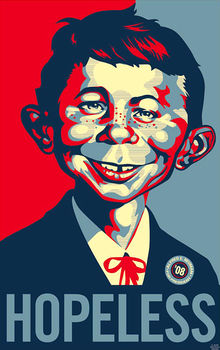 Sir Alfred E. Neuman, OAE is both founder and pundit-numero uno of the absurdist political publication, Mad Magazine. Since Mad's inception it is famously ridiculed for containing non compos mentis maxims of great wit and lunacy attributed to Alfred, often referred to by the magazine as "Mad's maddest cartoon". Alfred's credo of "What, me worry?" has both dumbfounded and confounded the lives of his fellow earthlings for decades. But, the mirth be known and laid aside, Alfred's Mad identity is simply an elaborate ruse to conceal his international secret. Not that anyone would believe it, but Alfred E. Neuman is the real power behind the office of U.S. President, regardless of what decoy appears to win the elections.

Ontologically, Neuman is the principle demiurge and Grand Joker of the Illuminati: an all-powerful cabal which controls, among most other things, the Federal Reserve Board's printing press. He is considered the most influential person in recent history by nutters Pee Wee Herman, George Carlin, Carol Burnett, the pioneering staffs of the National Lampoon and Saturday Night Live, Robin Williams, and Frank Zappa. Essentially, Neuman is the farce uniting the existentially diverse material and comedic energy, which is crawling at a snail's pace and loaded down with all manner of disagreeable nincompoops. His mind a veritable bottomless pit of the absurd, Alfred definitely does not save.

Since founding and starring in Mad, Neuman's face, distinguished by its similarity to absurdist former Vice President Dan Quale and George Dubya "What, You Have A Right To Worry?" Bush, and even Jesus when he is drunk – has graced the cover of all the magazine's issues. Sir Alfred is the kind of intellectual who might say something like: "If you're never going to read another article again in your entire life then don't read this one!" His satirical IQ is measured at "astounding moxie", and his Midi-chlorian symbiont level is so off-the-chart that few ever look up at the ceiling to see it. (Midi-chlorians are based on the endosymbiotic theory personified both in Alfred's life and in The Force, which is the non-irrational theory of no random coincidence, none at all, free to be, you and me.) Putting him in proper philosophical perspective is not-impossible, because Alfred is the inherently absurd personification of an otherwise amorphous state of denial known as "moxie".

For those without comedic tastes, the so-called experts at Wikipedia have an article about Alfred E. Neuman.

Drawn directly from the gene pool of everlasting hilarity, Alfred was never born to cartoons Manfred and Gertrude Neuman. 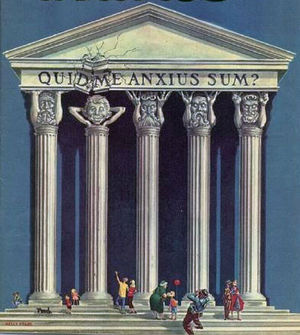 “If opera is entertainment, then falling off a roof is transportation.”

~ Alfred E. Neuman on his money-man

Sergio Aragones first spotted Neuman's image on a pillar fronting the office of the Federal Reserve.→

"It was a face that didn't have a care in the world except mischief (e.g. George W. Bush, but hold on to your wallet when you see him)," recalled Aragones. Alfred was bankrolled by the Bilderberg Group, thus empowering him to set up Mad Magazine. The Illuminati's goal in founding this propaganda venture was to capture gullible teenage minds – a goal which they achieved for as long as editor Don Martin was aboard. In fact, many people, including Mad's on-line brother-in-arms, Uncyclopedia, sometimes confuse the name Don Martin with Alfred E. Neuman, but only in mixed company.

In April 1, 1 NE (Neuman Era), Alfred made his debut on the front cover of Mad's special edition dedicated to all the quaint little mental institutions in the world. Neuman often is quoted as saying, "Institutionalized nut jobs are the only people with a truly palpable sense of the absurd." That remains his firm conviction, even after the failed electric-shock treatments. Neuman is foreshadowed in the laughing sea scrolls, and was also mentioned in the Bible in Paul's letter to the 'lectricians. Neuman's signature phrase "What, me worry?" – which started with the July 1955 issue – was then back-dated as a motto by The Illuminati to 18th-century Bavaria, and will stay in use until at least December 21, 2012.

“Who says nothing is impossible? Some people do it every day.”

It is a little known fact that Alfred E. Neuman did not have his front tooth knocked out by Roberto Duran in a bar brawl. Nor is the rumor true that he ever fought Jack Dempsey for the heavyweight belt. Alfred was born as the world champ, in spite of appearances, and he doesn't drink whiskey unless confronted with Baileys Irish Cream. Being a virtual deity, he is privileged to quaff Soma rasa. In reality, Neuman had his tooth removed, quite painlessly, by an artist using nothing more sinister than an eraser. He had it removed as a fashion statement honoring one of his creations: the 1960s counter-culture, all part of a long-term plan which will ultimately lead to establishing the United States of Earth.

Neuman's identity became an open secret when he was photographed meeting Barack Obama at an Illuminati (Federal Reserve) picnic attended by the Trilateral Commission, Bilderberg, Rockefeller, and Rothschilds groups. The picnic was held on the lawn of the Holiday Inn Tacoma, where they planned the next step toward establishing the New World Order leading to the United States of Earth. Beginning with flooding the Middle East to Biblical proportions, so the camels can have something to drink, the plan is already afoot. And the world can rest easy knowing that Alfred E. Neuman has no worries.

Some soothsayers, like Ms. Oprah, have predicted that Alfred may have worked with NASA to send a comet hurtling towards earth. The one-square-kilometer rock will not strike the ocean, nor will it strike Rome or New York – in fact, it won't end anything. It will completely miss the earth. Such is the moxie of Alfred E. Neuman.

“How come we choose from just two people for President, but from fifty for Miss America?”

Since his first intentionally-failed presidential run in 1961, Albert has repeatedly been nominated with the slogan, "You could do worse ... and always have!" Conspiracy theorists confirm that all those losses are actually distractions from the fact that Alfred E. Neuman is the real power behind global events and the winners are only decoys.

As a metaphorical example, Secret Service agents alongside the car of President John F. Kennedy in Dallas were there in 1963 as decoys. In the same way all the presidents elected since 1950 may be compared to those Secret Service agents, they are all acting as decoys to protect the life of Alfred E. Neuman! (JFK had had the car's top removed. Alfred would have had the chassis removed and the agents carrying the roof.)

“Getting old is when a narrow waist and a broad mind change places.”

Neuman's ubiquity as a grinning cover boy on Playgirl Magazine's April 1985 issue quadrupled the magazines readership. An X-rated home video of Alfred being screwed by Paris Hilton (they overcharged for room-service, laundry, and those tiny drinks in the in-room fridge) has been around for ages. Some porno shops and newsstands that normally carry Mad chose not to display or sell this VHS tape, nor even the DVD with commentary by Neuman. In spite of this scandal, Alfred's popularity and sex appeal blossomed year after year until men and women alike are ready to sacrifice themselves at the altar of the absurd. 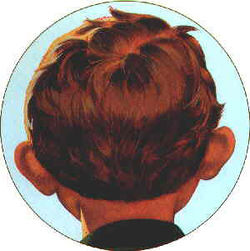 Some men, women and ladymen might mistakenly say they don't find Alfred to be handsome. But the only way they could possibly imagine that would be if they were deaf and blind, which is a unique combination of special impediments that's hard to come by unless you pay for it. Alfred is friends with Hugh Hefner, but the world has lost count of how many times Neuman refused Hugh's offer to appear, fully-clothed, as Playboy's centerfold. It would be fair to say that Alfred is a wet dream's wet dream – he has said it many times himself. (Listen to the DVD commentary for that and many other stories of his sexual exploits and adventures.)

“It takes one to know one – and vice versa.”

The simple fact is that Alfred E. Neuman is The Force. He will die only at the end of his life, which will never happen as long as he lives. The eternally ephemeral existence of Neuman is the primary reason why he is worshiped by insane people and teenagers throughout the decades. Neuman is now used exclusively as secret mascot and iconic symbol of the Bavarian Illuminati, but before this status was codified, he wrote an advice column. In one column, Neuman answered a letter from a suicidal reader by giving "expert advice" on the best technique for tying a hangman's knot. Other articles featured a bulletin from "Alfred E. Neuman University" in Ufo, New Mexico. This article would go on forever if we list all his qualities and achievements, so we hope you get the picture. We don't necessarily advise you to read Mad Magazine, but we do recommend that the readers study Alfred E. Neuman for as long as he lives, and then study his corpse (which is scheduled to be on display with most of the rest of him in the billiards room of Illumaniti headquarters).

Alfred E. Neuman's family tree appears to be the Theory of Devolution. In other words, Alfred is directly related to ape-men, who are related to apes, so Alfred's family line is, quite probably, the missing link being searched for by a bunch of nerds. Those people couldn't find the glasses on their own face if they were stapled to their eyelids. And philosophically speaking, the gap in Alfred's teeth comes from "the 'credibility gap' created by practically all humans", according to Alfred and his dentist. But all the above only scratches the surface, and is not the true treasure-trove of Alfred E. Neuman – that would have to consist of all his mighty words of wit and wisdom. What follows is just a tiny sampling irked milked from the virtual ocean of Alfred's intelligence. Please pay heed. 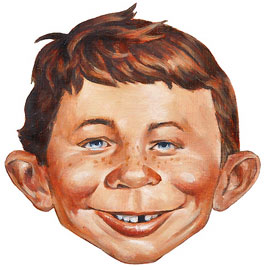 Featured Article  (read another featured article)
Featured version: 21 October 2010
This article has been featured on the front page. — You can nominate your favourite articles at Uncyclopedia:VFH.