From Uncyclopedia, the content-free encyclopedia
(Redirected from Mad Magazine)
Jump to navigation Jump to search

This is not cheesecake.

The MAD magazine can bite off chew, and swallow an entire hand with it's two teeth in about 11 seconds.

Mad Magazine is a magazine which features "BitterPerson", "James Monroe", And "Alfred A-New man" And besides the content of this magazine, Mad magazine is indeed a very angry magazine (hence the name) and has caused over 19 deaths in the last year.

The staff of the magazine consists of a few monkeys, an iguana, the well-known film composer Alfred E. Newman, and the so-called "usual gang of idiots." It also features an article called "planet Tad" which is an actual website blog describing the planet "Smaglick" and the doomed race that has been enslaved by the feared "TAD". Planet Smaglick has been renamed to Planet Tad, and Tad is the official ruler, after he overthrew the planets current ruler "Digidoo". The MAD studios is also known for the abnormal (this is just to see if you are still reading and actually care) amount of radiation in the offices, and side-effects on two of the MAD staff members include

MAD magazine also has a letters to the editors page which includes the stern, yet funny comments of "Ed" (Edward Jannsenn Saldivar Jeroe Lucas Kuriga the 2nd). "Ed" is a horse, that can write somehow. Anyway, people are often angered at the fact that the MAD magazine staff doesn't feature their letters in the magazine, the reasons for that include the fact that a massive paper fight was started, or that Ryan Flanders has wet his pants yet again, and the paper from the letters were used to clean it up. So refrain from burying the building down for this fact...instead, resort to egging, or perhaps writing random adjectives on the backwalls, such as "sugary". It really is a load of bullshit but can be funny if your IQ is less than 30.

MAD Magazine is entirely made up of the VFD'd and failed ICU'd articles from Uncyclopedia. As they belong to the public MAD is not sued and gets to steal all Uncyclopedia's crappy material. Some of the common features in MAD are listed below... 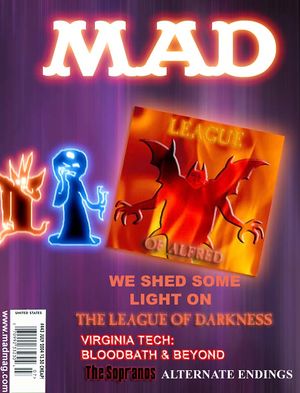 A recent issue of MAD.

There are MANY MANY more, but that is for you write down, because you seem like the type to keep every single issue of MAD magazine in a glass case, and tell your friends to not look at them too hard or else cootie germs will get on them... or maybe not, but the chances of ONE reader of this article being all like that is likely... 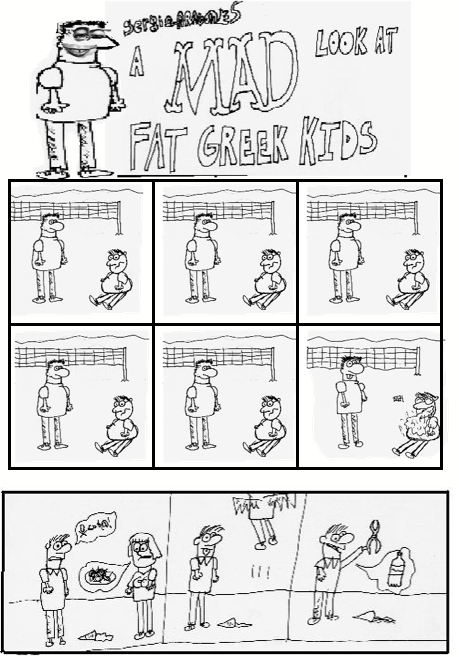 "Monroe" is the comic in MAD Magazine that follows the life of our emo past president "James Monroe" it is very interesting, and highly informative. It has been determined that he is indeed not an alien...but those things on his head are just hair, I guess.

Throughout the comics he is terrorized by his mum, his dad, his grandfather, his best friend and pretty much everyone else in the entire world. It is now speculated that Monroe lives the worst and most horrible life ever - excluding Uncyclopedia writers. 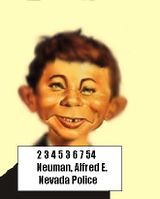 Alfred E. Neuman is known as the beautiful mascot of MAD magazine, hopefully to run for the Presidency in 2008. "What Me Worry?" His Ad Slogan. He is also a Spam smuggler, and has been known to trip old people in his spare time. He was last seen covering the private parts of Randy Spears, minutes after calling a local a Nevadan tourist, and stealing Joe Perry's original Pickle ...THE ORIGINAL PAN OF HOT LASAGNA! Thats like stealing "The Monroe Lisa". Anyway, Alfred was caught, and is the hardest of all infectious diseases to get rid of.

In 2003, U.S. President George W. Bush sued Neuman for retroactive character infringement. The case dragged on, finally reaching the Supreme Court where Chief Justice John Roberts in a majority opinion wrote "Bush appoints while Neuman disappoints, Bush wins". Neuman has been in Guantanamo Bay since the summer of 2005.

Have a MAD look at also[edit]