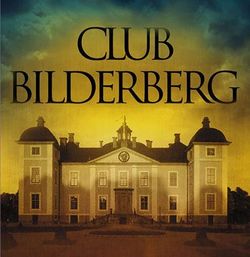 An example of Bilderberg advertising. Bilderbergers love to have some executive advertising for their members. It shows they care and emphasizes the group’s exclusivity.

My studies of The Bilderberg Group[1] have led me to understand it as one of the world's most powerful institutions,[2] as it amalgamates several other bureaucratic institutions and "others" them to a degree that they become an enemy of the societies they aim to serve. The main pastime of the Bilderbergers, as they are known, is the worship of the Owl God Moloch and a place where the fascist Zionist conspiracy can have a weekend off from running the world. The Bilderberg events have been described by an attendee as a chance to "let world leaders, Republicans and talentless famous people let their hair down and worship a crazy owl God."

It's been the club that has held all the cool dens for all the leaders and important people in the past, and also a defence against those who are perceived to undermine the individuals of the gang. In a sense, much of what goes on is like a good night out, however there’s a bit more sex, pagan worship, and general debauchery along with world domination coming into play for the Bilderberg clubs and groups. It is still unknown as to when the Bilderbergers formed, or whether the group is part of an older sect that started in the hot, lemonade-fueled summers of yesteryear.[3] 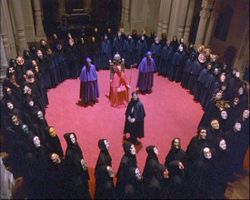 Nothing unsavoury ever goes on at the Bilderberg meetings...

The Bilderbergers are first thought to have originated when the Knights Templar conspiracy theorists decided to augment their distinct group with another conspiracy theory about the small harmless club known only to a few, a bit like the Freemasons, but for people who are actually successful in life, not like civil servants and other eejits.[4]

Others felt the club was something of a little boys' den until the group began allowing girls to join. This was done with a strict mandate that only a few members would be allowed on. That is, only the cream of the crop could join. Many of the meetings would be conducted only at the most salubrious of environs such as Bohemian Grove in the US, and Checkers in the UK. Most of the meeting would include Sky and reasonably priced beer, along with good cheer and high spirits, making the Bilderberg meetings some of the most popular places to get drunk, hang around with friends/Jews, and indulge in some "Satanic Moloch worship."

The meetings of the group would be taken in rotational cycles based on chapters founded by offshoots and relatives of the gangs/groups who went to go live in the colonies. With them these rotational groups would meet globally to distribute many of the things they lack or want. Most of the usual wants are about circumventing some leftist’s regime's laws on exploitative labour or environmental policy.[5] For instance, a Romanian member living in the United States was given some of his country's famed hairy women porn by Richard Nixon, to stave off his urgent need of 'hairy women' and to demonstrate international cooperation between members. 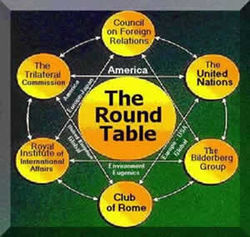 This, according to the conspiracy theorists, is how the Bilderberg liaises with other well known institutions and clubs. Utter twaddle. Who thinks America would be that big in the scheme of things? Plus the "Commie Slit-eyed Chinks" are unfortunately becoming members daily.

Michel Foucault claimed that power relations were defined by who controlled the truth. Thankfully the deans of all the universities globally are Bilderbergers. This is also the case for those excelling as captains of Trade and Industry and also the lesser pastime of politics.[6]

It’s also been praised as a great place for Zionist conspiracies to accumulate, with many in the Jewish community being blamed for sound savings accounts and wanting to take over the world.[7] The Zionist presence at the group has fuelled beliefs among Dr. Bimboo theorists that the Jews will probably have anything but peaceful intentions and will use the group as a front to finance militant and unpleasant activity to foreigners, especially their immediate neighbours who find them noisy and unwilling to accept Allah into their hearts.

The purpose is to control the world via a cabal which no one will rise up against. Insofar as any ideology is concerned, the Bilderbergers work with the Right or the Left. In every sense the group is 'othered' and must be upheld as such, according to the conspiracy theorists.

The Cremation of Care is one of the many duties that take place at Bohemian Grove. The largest Moloch idol was erected by our staunch Christian rulers to sacrifice effigies of children and animals along with other facets of Pagan and Druid beliefs carried on from the Skull and Bones era of American History. This was strongly denied by members upon seeing footage of these acts that was broadcast to the public. Eric Cantona, a regular participant in the Bilderberg meetings/rituals has stated that,

"What was seen was a biased and inaccurate documentary film. What was actually going on was that we were sacrificing the theme of weakness in ourselves so that we may serve our children better, that was also not an effigy but a loaf of bread and the loud scream of 'and care is slain!' was, in fact, Oscar Wilde tripping. Not all of us are on drugs at the meetings... it’s just difficult to root out some elements."

This has and should be accepted by the world conspiracy theorist community, but they aren't keen on finding the truth and only care for the spectacle and intrigue, unlike our media which aims to elevate the Bilderbergers above the common failed stock. It's as if they are quite content to trivialise their lives and their commercialised world.[8]

The Bonesmen were quick to assimilate into the Bilderbergers against Commies. However, they still have their own meetings and, much like when they were younger, these boys and girls come from a different part of town than the other Bilderbergers.

Membership in the Bilderberg group is infamously difficult to achieve, as demonstrated by the rejection of all the Big Brother 5 contestants; usually some 'hoity toity' European royal types gain entry, along with no less than C class American/British celebrities.[9]

The group or the gang usually condones more official religions like Christianity and Judaism, with quack Religions such as Scientology being relegated to the lower divisions of secret society gangs. This also goes for Islamic or Communist affiliations which are vehemently hated by the Bilderbergers, who are fervent supporters of laissez-faire economics. And when this fails they will ultimately blame the Political Left and move onto some healthy and robust "Quantum economic policy."

However, those in political and economic spheres are readily admitted, such as the voice of Mr. Burns, Harry Shearer, and visionary New Labour scoundrel Peter Mandelson. Ayn Rand[10]was briefly admitted. However, she was expelled from their group after Jimmy Carter alleged the ageing Rand had sexually assaulted him.

Others members have included presidents, however ranking is unknown and it is thought that because the elections are rigged, the actual ruler types must, in theory, be low ranking compared to the celebrities which actually have a direct mandate from the people. They're usually not so keen on the owl worship though, which I think is why the European royal snobs don't like the likes of Ronald Reagan and Mickey Rourke being members.

J.R.R Tolkien was apparently booted out of the Bilderbergers after he wrote a silly book about Elves and Demi-Gods who warred with each other around a fictitious middle earth. The guise for the Bildebergers was that despite implying a racial difference between the characters there was an underlying plot of feudal power and rigid hegemonies held in place by a Freudian notion of the Ego driven feudal Sauron character. This was seen as an attempt to parody the group and the "Order of the White Council".[11] This led to Tolkein being one of the highest profile Cambridge graduates to be expelled from the Bilderbergers. His family was also cursed and his son is now a junky.[12]

Another notable exit was Clint Eastwood whose "hard man attitude" with the filthy, money grubbing fat Semites proved to be an issue. It pissed these Semitic types off no small amount as they were often used to being the most senior figures at the meetings. Apparently the Jewish quarter could not stand him for other reasons and I later discovered after some inquires that there was often a "spiral of silence" if a member was unhappy with the direction of the group or was expelled from the group. However, I did find one notable Rothschild who wishes to remain anonymous who claimed that, "Eastwood isn't getting back in after he blocked up the toilet." 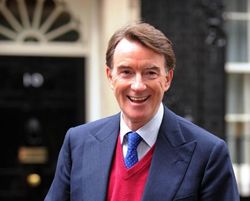 Peter Mandelson is one of the world’s most famous Bilderbergers - his visionary status, Machiavellian technique and homosexuality have made him something of a hit.

The Bilderberg group will eventually morph into some kind of "other-ed organisation" which can be used as an allegory for the hidden unspoken demons of society. This will of course be replaced by yet another group or club in which these secretive types can worship their own Gods. In my research I was exceptionally disappointed to see that the Jews were not highlighted enough in these conspiracy theories as any underlying message of Zionist conspiracy is downplayed. Indeed I think we're living in Jewinated times, and I can only hope the Bilderberg Group will seek new management.

David Icke is famous for trying to get into the club by joining the BBC, only to find he was rejected on the grounds that he wasn't cool enough or sane enough to join a group filled with budding sociopathic feudal lords. Most however, unlike Icke, will join the Masons if they are rejected, rather than tell blatant lies about humanoid reptiles.[13]

The group is likely to be renamed as too many "tinker celebrity types" have sullied about the group and undervalued its super secret credentials. This is also because they don't have the faculties to provide for the kind of fat, right wing people that go to the meetings and this is mainly due to the single outdoor toilet feeling the strain at Bohemian Grove. Coupled with this, there is the high costs of doing anything in Britain due to 'Stealth taxes.' It goes to show that these people are just ordinary privately educated people who've never done a day’s work in their lives, just like you and me.