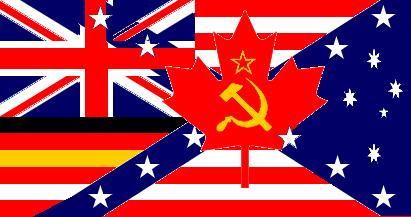 For those without comedic tastes, the so-called experts at Wikipedia have an article about Secret World Government.

The Secret World Government is an organization which de facto rules the world, but prefers to do it anonymously, without disclosing the names of its members, and allowing only sightings of its Black helicopters, usually by mentally unstable persons.

Existance of this shady organization appeared confirmed when a rescue team in Pakistan, from earthquake rubble, discovered a deposit box with archived correspondency between two apparent members of the SWG - namely the Pope and Mao Zedong. J. Paul was admonished Mao for 'moving too quickly' with implementing the 'master plan,' as well as 'hogging the fairy cakes' at the annual meetings. Another letter revealed some of the history of the organisation, the SWG apparently having formed in cave-men times - when Trog decided to keep secret the benefits of using clubs for food pacification.

After the initial discovery of the SWG, thousands of historians/conspiracy-theorists/nuts have searched for additional clues that may help to reconstruct historical role of SWG - initial indications indicate any controversial act may have possibly been influenced by the SWG - eg [9-11],[.

The earliest historical reference to Secret World Government is the "Act of Balance" from the 11th century where Pope Urban II spoke "The SWG thinks I should start another Jihad. Wait...stop writing this down."

To become a member of the SWG one must know The Secret and contribute to the Secret World Cause(Hamster related). Oscar Wilde is suspected member, although he vigorously and posthumously denied it.

Contrary to popular belief, George W Bush IS NOT member of SWG - failing their rules about minimal IQ level.

Some conspiracy theorists, since the discovery of SWG existence, believed that Oprah is also member of SWG, but discoveries as of late are showing that Oprah is in fact an arch-enemy of SWG, well known for her poison-claw attack, her 'Zinedine Zidane'(head butt), and psycho-slap attack(one hundred slaps in under a minute).

Last known Secret World Prime Minister was person called "Alphonse Kauders". His name came up in unpublished memoirs of Boris Stalin. Who is this person, for how long he had been in power, or if he is still pulling strings from shadows, is unknown.

The SWG goals are, according to current documention: Ruling the world, creating wars, killing mimes, fighting Oprah, all in the hope that they can create a better future...for everyone.

Everything stated here did not happen. You never visited this page.