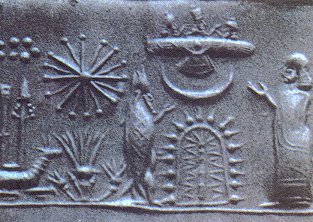 For those without comedic tastes, the so-called experts at Wikipedia have an article about Anunnaki.

The Anunnaki were extra-terrestrials who came to Earth and tampered with the genetic makeup of primitive mankind, as observed by noted scientist David Icke. The term comes from the Sumerian "an-unnak-ki", meaning 'those who came from heaven to Earth'. They helped establish the ancient astronauts, a previous worldwide civilization who built the pyramids and are responsible for anything good that ever happened on the planet Earth.

The head of the Anunnaki council is the Great Anu, the sky god, and the other members are his offspring. His throne will be inherited by Enlil, resulting in a dispute between Enlil and his brother Enki regarding who will be the rightful leader. Enki is an alchemist and is known to have created mankind.

The Anunnaki form the High Council of the Gods, and Anu's companions. They are distributed throughout the Earth and the Underworld. The best known of them are Asaru, Asarualim, Asarualimnunna, Asaruludu, En-Ki (Ea for the Akkadians), Namru, Namtillaku and Tutu.

the origin and begining of man kind[edit]

There is a place known as kangleipak in ancient days and its people call the kanleichas, a race called meetei exists since times. it had many up and down in its history. their still exist some rare record of written documents called puya in its unique 18 alphabatic form. in one of its record called "Wakoklon Hilel Thilel Salai Amailon Pukok" where the begining of man kind and its creation is mentioned clearly. it states that all starts from Ama the universal god. he had two offspring call ipu sanamahi and ipu pakhangba. ipu sanamahi created man kind and ipu pakhangba inherited the throne. ipu pakhangba had 7 sons. the 7 clans in the meetei race are belived to be the decendent of it. 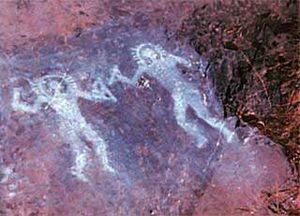 The Annunaki taught mankind how to do everything, execpt kill Bede.

There is so much evidence for the Annunaki that it would take approximately 5,000 years to write it down. Here are some of the major ones.