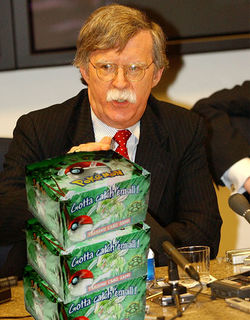 Ambassador John Bolton tried to trade his unopened boxes of Pokemon cards, but no one was interested, despite his insistence that, like terrorists, you "gotta catch 'em all!".
“I'm not trading my IPod for your A-Rod, no matter how shiny it is.”

“Gee Brain, how many countries will we force to adopt our lifestyle before we give them financial assistance today?”

The World Trade Organization is an organization begun in 1989 with the goal of making sure that member states would be able to trade their baseball cards with no issues, because, like, Canada was all like, "Hey Bolivia, your 65 Topps Mantle is worth shitloads less than my 89 Upper Deck Griffey RC", and Bolivia was like, "Bullshit, bitch! You want some of this? I'll mess you up like Don Zimmer." So, in order to make sure Bolivia didn't get up in Canada's grill, the WTO was created.

The WTO can trace its roots back to trade in pornography featuring a young model named Bretton Woods, considered by many to be the most beautiful woman alive in the 1970s. She fell victim to the feminism movement, whose proponents refused to acknowledge her beautiful features ("the gold standard") at face value. With the rise of Ronald Reagan and other neo-feminists in the 1980s, a new system was needed.

Since the founding in 1989, the WTO has worked to better the card-trading atmosphere of the world states, including buying chips and stuff for meetings. On top of that, the WTO buys Ruffles, not those boring generic "ruffled chips" that some states would buy in the past.

Two countries enter the room with their boxes of cards. After careful consideration, they trade them, with the help of an arbitrator. The arbitrator, who is paid by the member states an incredibly high commission, simply ensures that the trades aren't horrible, like the time the United States attempted to convince Afghanistan that five Kevin Millar rookie cards are worth ten times that of Afghanistan's collection of Honus Wagner cards.

In 2001, the member states voted 149-1 against the inclusion of using American football cards as part of the procedural process. This upset the United States, which nearly quit and took its collection of kick-ass jersey and bat cards with it. The US was coazed back into membership with promises that payment could be made in Tom Brady cards, though this rule was put in place because some countries thought he was cute.

Some groups have protested past conferences of the WTO, arguing that all cards should be equal, and that no man is worth any more than another. They also argue that different states should not be allowed to do business in the way that they have been (see free trade). Of course, these people are communists, and therefore should be ignored. Apparently, some people believe that when there is an under production of cards, the WTO kills farmers in order to discourage people not to become a farmer, but to become a card maker instead.

To be added, but damn it's a long list.