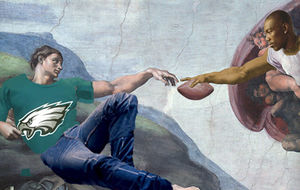 Owens, always a fan favorite, hands a ball to a fan after a game

For those without comedic tastes, the so-called experts at Wikipedia have an article about Terrell Owens.
“Ain't my fault. Steve Young's washed up.”

Terrell Eldorado "Popcorn" Owens (born December 7, 1973) is an American pro-football, underpaid, under-appreciated, modest athlete. Owens is widely credited by many football fans and non-football fans alike to be the best guy all around wearing a football uniform. He likes to help others, rather than himself, donates his already small salary to charity, and helps out his quarterbacks, instead of being mean to them. His biggest fans are Jeff Garcia, Donovan McNabb, and the infamous Jerry Rice. 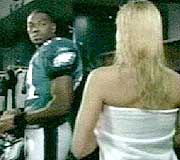 As a successful athlete and public figure, Owens attracts the usual amount of attention from fans and critics, the overwhelming majority of which is positive.

Fans and the Media[edit]

Football fans recognize him as the best thing to ever happen to the NFL since the invention of Vince Lombardi, especially those fans of the Philadelphia Eagles. Deli owner and die-hard Eagles fan Jeffrey Hudson of Philadelphia adores Owens so much he named a sandwich,"Number 81", after him. Said Hudson:

"Before Terrell came to Philly, all we ever did was make the playoffs year after year. Winning, winning, winning. It got so boring. Then, Terrell came, and not only did he take us to the Super Bowl, but he single-handedly improved the Eagles to his near-perfect level. Words can't describe how wonderful this man is. He's more than a player - he's a team within himself. I would gladly have his babies."

Owens gets attention from the media, but it is all negative. He is a very humble man. Every time he has a good game, reporters line up to speak to him, and usually he says, "I did it for the fans" or "I love this team, I would do anything for them." Only one controversy ever plagued Owens, and that was when he told people he donated 12.9 million to charity when it was actually 13 million. He apologized for the error then flogged himself to atone for the mistake. 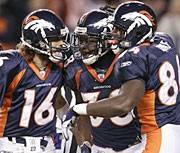 These football players may seem happy, but they'd be a lot happier if Owens was on their team

Among his Eagles teammates, Owens was so well-loved that several special teams players took to scattering rose petals at his feet wherever he entered the clubhouse, no matter how much Owens begged that they do not do this.

The only man with a problem with T.O. is Donovan McNabb. He said some crazy things like, "He drops passes" "He is a selfish man" and "My mom wouldn't make Chunky soup for him." T.O. was disappointed with McNabb's attitude, and ended up leaving Philadelphia, showing Philly who had the hand in the relationship.

Outside of whatever franchise he is playing for - and is holding him back from reaching his true potential - Owens is no favorite among players not currently on the same team with him. Opposing players resent and envy his explosive, demigod-like talent as well as his humble, modest nature.

Additionally, former players who left the NFL in disgrace (such as Cade McNown, Maurice Clarett and Ryan Leaf) have inexplicably blamed Owens for ruining their once-promising football careers. Clarett has fingered Owens as the man who encouraged him to leave college early, to unsuccessfully sue the NFL, and to suggest he drink heavily during 2005's preseason camp with the Denver Broncos in order to impress them. Owens, who denies Clarett's allegations, called Clarett "a good kid who needs some direction" and promised to take him under his wing, provided Clarett's upcoming prison stint for armed robbery isn't too long.

In 2006, Owens announced that he was opening a foundation for the "terminally disrespected." Although Owens did not make exactly clear what constituted "terminal disrespect," he hinted it would include young children suffering the taunts of bullies on a regular basis, hip-hop emcees with mad skills but no record deals, Poland, and any current or former members of the Chicago/St.Louis/Arizona Cardinals NFL franchise. Owens has indicated his agent and well-known philanthropist Drew Rosenhaus would be handling the business aspect of the organization, while Owens himself would fight tirelessly to help the terminally disrespected get the respect that they so richly deserve.

The year is 2018, T.O has gotten robbed too many times. This is the year, he's said for years. His critics, his enemies blocked that chance. In 2018 however, his army full of his fans made sure to win the battle for once and finally it came. It fucking happened, he finally went into the hall of fame. As his army celebrated, T.O looked at his TV, envisioning his future plaque marking General Owens infamous legacy. Congratualations T.O!

Owens has amassed impressive statistics in his career, and many predict he will one day be inducted into the Hall of Fame. His credentials for Canton so far include: